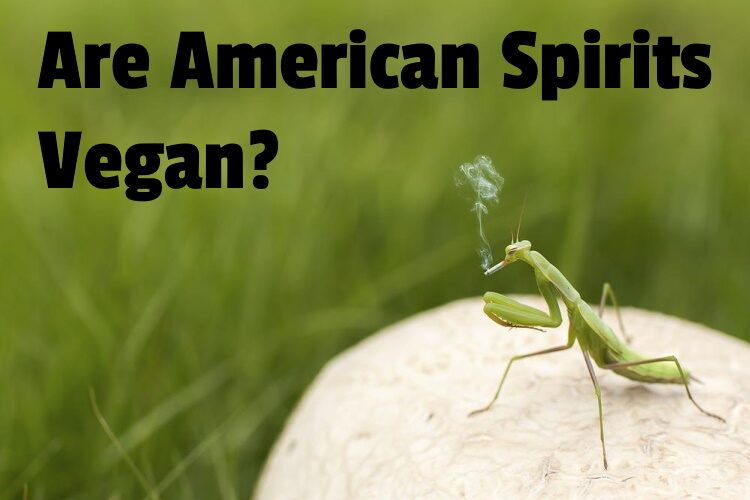 Yes. American Spirits are vegan. They are made with tobacco and water. Therefore, they are additive-free. And from its research and development to its manufacturing process, the company that manufactures the brand does not engage in animal testing.

But there’s a lot more.

In this article, we’ll explore riveting themes such as whether vegans can smoke cigarettes, are American Spirit cigarettes tested on animals, and if American Spirit filters contain pig blood! But we will also find out what brand of cigarettes are vegan.

Most cigarettes aren’t vegan or cruelty free but if you are vegan pls buy American Spirit instead . Other cigarettes test on animals such as dogs 😥😥 pic.twitter.com/xIbk45IVJy

American Spirit is one of the few brands that have stopped conducting tests on animals.

Because of this, some animal activist groups praised it for its leadership on the issue and held it up as an example for other brands to emulate. A non-profit organization, PETA (People for the Ethical Treatment of Animals), is one such activist group.

Now, it’s important to know that as of the time of writing this article, U.S. law does not outlaw animal testing of cigarettes. So, many brands sold in America continue animal testing. Animal testing is employed in some other industries too.

This is not the case in Germany, Sweden, UK, Estonia, and a few others, where animal testing is explicitly banned. Only cigarette brands that comply with this regulation are allowed to be sold within Germany, and American Spirit is one of those brands.

Can you order American Spirit through Instacart?

I explained why Instacart does not deliver tobacco products, and I even revealed if it’s legal to deliver cigarettes.

Vegans who wish to smoke and avoid any animal by-products or cigarettes that have been tested on animals can choose American Spirit cigarettes as they meet both those guidelines.

To be honest, whether vegans can smoke cigarettes is a tad contentious. There are two camps: one for, the other against.

The latter usually allude to the fact that some cigarettes have substances in them that have been derived from animals and that some brands do conduct cruel tests on animals.

And that being vegan also requires being environmentally conscious. Smoking involves releasing chemicals that have an adverse impact on the environment.

It’s hard to argue with their position considering the fact that being vegan is:

“a philosophy and way of living which seeks to exclude—as far as is possible and practicable—all forms of exploitation of, and cruelty to, animals for food, clothing or any other purpose”.

But those who believe that vegans can smoke also have a valid point.

They say one should simply choose brands that do not use animal products and who also do not conduct tests on animals. And that one should ensure that they do not smoke near pets.

There are also those who say that it’s impractical to avoid all products simply because they have been tested on animals. They cite most medicines and vaccines as examples. Ultimately, the decision to smoke or not to smoke depends on the vegan.

Ever wondered if you can order cigarettes through DoorDash?

It is highly unlikely that American Spirit cigarette filters contain pig blood because the brand is owned by one of the companies that have adopted a manufacturing approach that excludes cruelty to animals.

After conducting in-depth online research, I did not find information to support the idea that American Spirit’s filters contain pig blood.

You might be wondering if pig blood is indeed used in the manufacturing of cigarette filters and what’s the big deal.

Yes. Some cigarette manufacturers employ big blood in making their filters. It is kind of a big deal because Jews, Muslims, and Vegans do not eat pork and are sensitive to any part of a pig being used in products they buy.

A little over a decade ago, a Dutch study revealed that pig hemoglobin is being used to make cigarette filters more effective in blocking harmful chemicals before they enter the lungs of smokers.

But it’s not easy to determine which brands employ pig blood in making their filters since cigarette manufacturers are not required by law to display all their ingredients on the cig package.

American Spirit light blues, they’re one of the only vegan cigs in the us. Doesn’t smell like typical cigs and tastes really nice and smooth without any additives pic.twitter.com/vYoKcmzEV0

What brand of cigarettes are vegan?

American Spirits cigarettes are vegan as they are made of tobacco and water. In addition to this, their manufacturing process or research and development does not involve any form of animal testing.

Most cigarette brands in the U.S. are being made by companies that still engage in animal testing. Of course, animal testing is legal in the states. But that disqualifies these cigarettes if you are vegan.

American Spirit is the brand that fits the bill if you are averse to cruelty to animals and eating them.

Which cigarette companies do not test on animals?

Imperial Brands, Santa Fe Natural Tobacco Company, and Lorillard Tobacco Company are cigarette companies that do not test on animals. As is common in other industries such as cosmetics and pharmaceuticals, animals are used to test products meant for humans.

It’s vital to stress that as of the time of writing, animal testing is legal in the U.S.

So, companies such as Altria, the top dog in the cigarette industry and the maker of Malboro and Virginia Slims, still conduct animal testing.

To put the aforementioned in context, the following are the key players in the American cigarette industry:

Ever wondered if you can get tobacco products from Trader Joe’s?

This is what I explored in a recent article I published. I get into whether Trader Joe’s and Aldi split because of an argument over selling cigarettes and whether Aldi grocery store sells cigarettes.

I explained why Trader Joe’s doesn’t sell cigarettes and if any retailer sells house-brand cigarettes. And I revealed discount grocers that sell tobacco products.

Then, we looked at what brand of cigarette is vegan. American Spirits is vegan. Lastly, we wrapped things up by considering which companies do not test on animals.

Image by Ryan McGuire from Pixabay

link to Why American Spirits Are Better

You know that American Spirit products are cool and all, but are they really organic or additive-free? And how does that really impact you? Let's look at why American Spirits are better. American...

Continue Reading
link to Why Does American Spirit Burn So Slow?

A lot of cigarettes burn fast. After a few puffs, they seem to have vanished. American Spirit does not belong to this category, and you’ve probably wondered, why does American Spirit burn so...