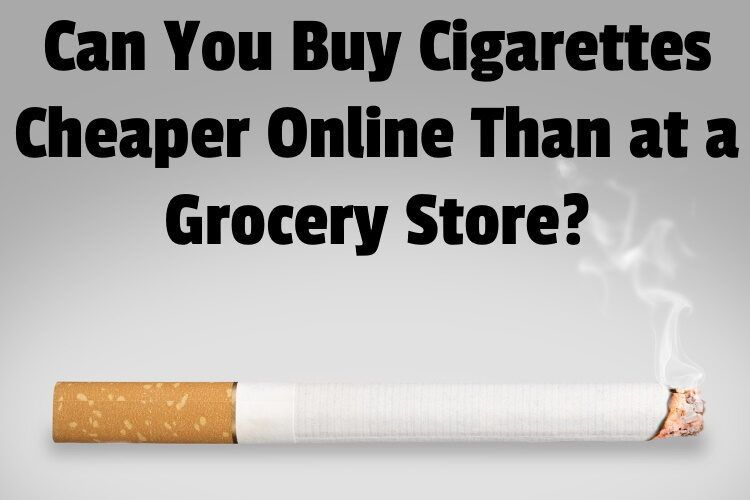 As a general rule, cigarettes are cheaper online than at a grocery store. However, in some cases, buying by the carton is necessary to reap those savings. And not every grocery retailer or online delivery service works with tobacco products.

So which online sellers sell cigarettes?

In this article, we’ll explore if some of the biggest e-commerce giants sell cigarettes and how you can buy them online. But we’ll cover what is legally required too.

just ordered a pack of cigarettes on postmates so i wouldn’t have to leave the party, life is truly grand pic.twitter.com/ZZLQD38vsM

Is it cheaper to order cigarettes online?

Yes. It can be cheaper to order cigarettes online. As a general rule, expect to save 5% off in-store retail prices when purchasing cigarettes online. However, be aware there will be delivery fees, and some retailers do increase prices for online delivery.

So if you just think you’ll order a pack from Instacart and save a boatload, think again.

Over time, you’ll save a substantial amount from ordering cigarettes online. Most online stores indeed have a two-pack minimum requirement. However, relative to buying two packs offline, you’ll still save a lot of money.

You’ll save even more if you buy in cartons.

You’ll simply go to where you’ve stored the cartons, pull out a pack, and enjoy that pleasure that only fellow smokers can understand. Non-smokers can never “get it”.

In addition to this, you know you’re “spending a lot of money” if you had to take a bath, get dressed, and drive to a nearby store and back if you were to find out you ran out of cigs.

That time you could spend making money or enjoying your favorite pastime now has to be spent looking for smokes. Not the way to go.

But, when you order online, you simply need to use your phone or computer and wait for your order to be delivered.

You could ensure you place your order 2 or 3 days before you run out. Financially and in terms of time and energy usage, it’s a lot cheaper to order cigarettes online. Ordering online is not stressful at all, and that’s invaluable. Just make it work for you.

Say you smoke a pack a day. Buy in cartons. That way, you’ll have a lot and can easily estimate your “re-order” level so that you’ll not run out of smokes again.

Can I buy cigarettes from Walmart online?

As of the time of writing, you can buy cigarettes from Walmart online through DoorDash in 46 states. However, Walmart does not sell in some states, and it seems as if this would eventually be the norm in all states.

About a week ago, the Wall Street Journal (WSJ) reported that Walmart is ending cigarette sales in select states after the company’s leadership has debated the issue for years!

It went on to say that the e-commerce giant is removing cigarettes from its stores in:

It’s important to note that New York and parts of Massachusetts won’t allow stores with retail pharmacies to sell cigarettes.

As of the time of writing, you can buy cigs through DoorDash from Walmart in 46 states.

Now, the WSJ disclosed that cigarette sales in the store are actually less profitable than other products such as candy!

In fact, it’s eating into the company’s profits. WSJ also revealed that as the pandemic ended, cigarette sales in the U.S. actually plummeted by 5.5%.

Goldman Sachs said (according to the WSJ article) that Walmart’s sales represent just a little over 5% of cigarette sales in the U.S. and that folks who want cigarettes have other outlets they can buy from.

That’s the heartwarming truth. There are many websites and apps from which you can order your smokes, even if good ol’ Walmart were to decide that none of its stores would sell.

Amazon delivered me a package for someone else, to an address that doesn’t exist. I messaged them and they said to keep it and it’s kinda cool actually? A tobacco pipe with the tree of Gondor on it. I used to smoke pipe tobacco on occasion too, so not completely useless! pic.twitter.com/gYi5yJzeNs

Can you buy cigarettes from Amazon?

No, you cannot buy cigarettes from Amazon because the e-commerce giant does not sell cigarettes, cigars, tobacco, or related products. However, it sells cigarette rollers, papers, tobacco pipes, tobacco, hookah accessories e.t.c

Nicotine is a no-no on Amazon.

So, if you were to come across claims that you can buy cigarettes from Amazon, know that it’s a scam because, as of the time of writing this article, it does not sell cigarettes.

But be rest assured that you can buy the following smoking accessories from Amazon:

Okay, so Amazon doesn’t sell smokes. What about Trader Joe’s? That’s what I explored in a recent article I published.

I looked at whether TJ and Aldi spilled over an argument over cigarette sales. I also revealed whether Aldi sells cigarettes. And I shared info on what online retailer sells house-brand cigarettes.

I love the story that ALDI is actually two different companies, because the brothers who founded it fell out over whether they should start selling cigarettes or not, so split the shops between them (we have ALDI Sud in the UK). pic.twitter.com/iIihDkOni4

The fact is that cigarette sales in stores are actually declining and are not profitable because they have very thin margins.

So you can’t get smokes at Aldo, is it possible to order cigarettes via DoorDash?

In a recent article, I answered questions such as whether Walmart delivers cigarettes with DoorDash, how to order cigarettes from DoorDash, whether you’d be required to show your ID, and whether the cigarettes would be left at your door.

Can cigarettes be bought online?

Yes. Cigarettes can be bought online. Ciggiesworld.ch is one of the largest sellers of cigarettes online. But DoorDash also sells cigarettes in select cities and states. If your city doesn’t come up as an option for purchase that likely means there are local or state restrictions in your area.

Of course, you also have to be 21 or older. And you can’t reside at a location that’s on the restricted list, such as a school or a prison.

The aforementioned app and others would get cigs to you, as long as you have an ID that shows that you’re 21 or older and you’re available to pick it up yourself. So, you can’t ask them to leave it at your doorstep because they’ll have to confirm that you are actually above 21. They need to physically see you and your ID.

In addition to the apps I mentioned, www.saucey.com is also a great source for ordering cigarettes and an array of tobacco products such as the Juul, Juul pods, cigars, chewing tobacco, rolling tobacco, rolling papers, nicotine gum, and lighters. Simply input your address to know if they deliver to your location, the local pricing, and the delivery options.

Postmates used to sell cigarettes but was acquired by Ubereats, and as of the time of writing, they no longer deliver cigarettes. But they do deliver alcohol under certain restrictions.

What about Instacart? Do they deliver cigarettes?

That’s what I looked at in a recent article. In it, I looked at whether Instacart delivers cigs, whether you could order on DoorDash or Ubereats, and the associated conditions. I looked at if it’s legal to deliver cigarettes.

Despite the name, GoPuff does not deliver cigarettes. They have a lot of smoking supplies (rolling papers, vapes, ashtrays, etc). But not actual cigarettes.

In the article, we looked at whether you can buy cigs online and if it’s cheaper to order cigarettes online.

We also looked at whether Walmart sells cigarettes.

So they aren’t availing online in every state in the US.

There are very few apps and websites that deliver cigarettes. Fortunately, DoorDash is one of the apps you can use. So, here’s a step-by-step guide on how to order cigarettes on DoorDash. To...