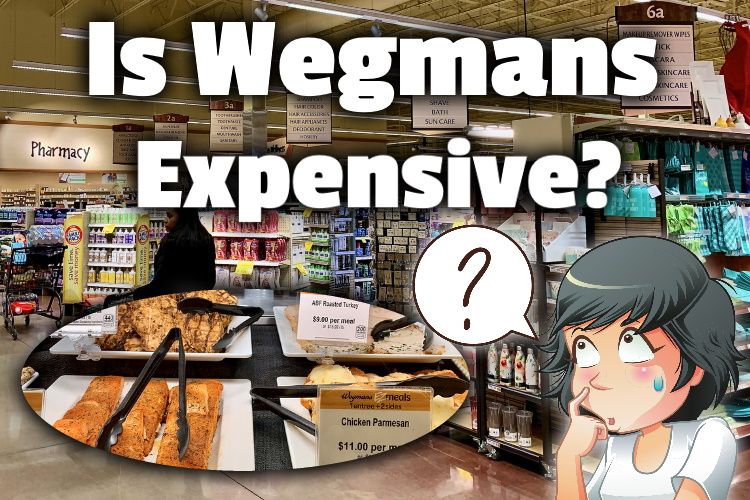 There are some stores out there that just have a good reputation, and then you start wondering about them. I’ve heard really good things about Wegmans, and it got me wondering – is Wegmans expensive?

So I did some research, and this is what I found out:

Is Wegmans expensive? Yes. They are generally 9% more expensive than Whole Foods Market and significantly above Walmart. They do, however, fare better than ShopRite, and have excellent prices on their private label products.

But there’s much more to know about Wegmans.

Like, do you know that Wegman is more affordable than Whole Foods? Or how Wegmans prices compare with Trader Joe’s and Walmart? Or what exactly is Wegmans known for?

To know all the answers, just keep reading!

Wow I feel like I hit the jackpot at @Wegmans!!! 😂 pic.twitter.com/0mikj0jQoV

Yes, it is! Wegmans is very affordable. While not a bottom of the barrel grocery retailer like Walmart, Wegmans does offer very competitive pricing while still maintaining the look and feel of a store more like Whole Foods Market.

In fact, in a recent price comparison by Yutong Yuan of Business Insider, Wegmans consistently beat ShopRite on almost every item checked. (source)

Wegmans is consistently ranked as one of the best grocery chains by Business Insider.

Even though they are a regional store, they beat out Amazon, Costco, and Publix when it comes to great places to shop. Headquartered in Rochester, New York, they can only be found in the Northeastern US and the east coast.

Wegman’s branded items are often rated better than their name-brand counterparts and are much cheaper. If you have to have Cheerios, you should purchase them elsewhere.

But if Wegmans Toasted Grains will do, they are cheaper and have great flavor.

One of the best things about Wegmans, though, is that they double coupons up to $0.99! If you’re trying to save money, this is a great way to do it, as you can get many items for pennies on the dollar by using coupons at Wegmans.

While people may call it a grocery store, it’s much more than that. A grocery store is typically a small, specialized store. Wegmans are very large supermarkets that stock up to 70,000 products.

But what’s the difference between a grocery store and a supermarket?

While the terms are often used interchangeably, there are differences. To learn the differences between a grocery store and a supermarket, check out this recent article.

Also got this from Whole Foods! I haven’t had a croissant in YEARS 💛🌱 #vegan pic.twitter.com/1LmL1sRzZs

Overall, Whole Foods is generally cheaper than Wegmans. A recent price comparison between the 2 grocers found that Wegmans was 9% higher compared to Whole Foods Market.

Of course, it’s worth pointing out that a one-time price snapshot may not tell the whole store.

After all, prices change daily in some cases, and seasonality can affect pricing too. But at the end of the day, Whole Foods Market has 500 stores compared to Wegman’s 103 stores.

Going back to that price comparison I mentioned above, here’s a quick snapshot of how the 2 grocers compared at the time of that shop:

Whole Foods and Wegmans are both very similar when it comes to experiences.

They both have a hot bar and dine-in eating. Both spend more money on decor, lighting, flooring & fixtures than your average grocery store.

They both want you to hang around a while and make shopping for groceries an event. And they both sell the grab and go meals that you can cook at home. Natural and organically grown options are also featured extensively at both stores.

Wegmans is a much larger store than Whole Foods, although Whole Foods Market is, of course, nationwide as opposed to a regional grocer.

But Whole Foods is more specialized than Wegmans.

Whole Foods is the leader in natural and organic foods. And while the acquisition by Amazon has lowered prices and Prime members get great deals, they didn’t receive the moniker “Whole Paycheck” for nothing.

Whole Foods has compiled its own list of unacceptable ingredients.

Ingredients like hydrogenated fats, high-fructose corn syrup, and artificial sweeteners are banned from its stores. If a food contains any of these ingredients, you won’t see it on their shelves.

This is one of the reasons Whole Foods sells the best steaks.

To read more about which grocery store has the best steaks, and why, read this recent article.

Generally yes. Wegmans is more expensive than Trader Joes although their prices on their private label products are comparable. Wegmans spends a lot more money on store decor and operations and is also much more of a 1-stop shopping experience. Those expenses translate into slightly higher prices.

But they have a lot of similarities on the surface.

Wegmans and Trader Joe’s both have cult-like followings with fans that rave about them. They both have excellent in-house brands and exciting store designs.

At almost 500 stores, Trader Joe’s is more massive than Wegmans in the number of stores. But Wegmans has superior customer service and exceptional store design.

But the thing that really makes Wegmans superior to Trader Joe’s is its number of hot and ready-made takeout options.

Trader Joe’s does have a small station near the back of the store where you can taste some products. But Wegmans has not only samples of many products, but they also have a wide variety of hot food and takeout.

They have all kinds of cuisine, like the Mediterranean and Asian, sushi counters, and even a make your own pizza bar!

Stores have coffee stations and cocktail bars, too.

.@Wegmans Wednesday’s! That’s a thing… right? 🤨🤔 It is *now* that our #PlantBased cheese is available at a store near you 😏

Go on, stock up on what we consider to be the “revolution of plant-based cheese” 🙌 https://t.co/MNPl9qze4j pic.twitter.com/tB0IyjKaS6

What is Wegmans famous for?

Wegmans is known for its warm, friendly stores, consistently winning awards for both the shopping experience and working conditions. Their stores are quite large but still have a neighborhood market feel. But their product selection, a mix of gourmet, natural, organic & conventional, is often superior to other grocers.

But those are just a couple of reasons people love Wegmans.

The most notable thing about Wegmans that sets them apart from other grocery stores is all of their grab and go food.

They have a Mediterranean bar. It’s so much more than just olives. It’s got a variety of Mediterranean inspired options like hummus, roasted red peppers, and bruschetta. Customers can even make their very own tapas-style plates.

They have DIY bars where customers can make their own trail mix and nut butter. The Market Cafe offers sushi, sub sandwiches, pizza, and coffee. There’s even an eat-in restaurant and cocktail bar!

How are Wegmans prices compared to Walmart?

Walmart is cheaper than Wegmans. Walmart’s top priority is price. Wegmans, however, places priorities on quality, selection, customer service, and decor. This naturally makes them more expensive than Walmart.

In the grand scheme of things, Wegman’s prices are very reasonable.

But on the other hand, Walmart’s selection and quality are going to be quite limited. Wegmans’ most reasonably priced products are their house brands.

You are also going to do a different kind of shopping at Walmart than you’ll do at Wegmans.

If you’re wanting Coca Cola, Cheetos, Velveeta, and Coor’s Light, Walmart is clearly the way to go. But grocery shopping at Wegmans will be more of an experience.

You go to Wegmans, not just for the reasonable prices, but because you will want to spend a couple of hours hanging out.

Maybe you’ll want one of those delicious sandwiches or something from the Mediterranean bar.

If you’re a Shoprite shopper, you may be wondering if it’s worth it to check out Wegmans. Luckily, I wrote this recent article comparing Shoprite and Wegmans.

Did I cover all you wanted to know about whether Wegmans is expensive?

In this article, I talked about whether Wegmans is an affordable place to shop.

Are you going to start shopping at Wegmans?