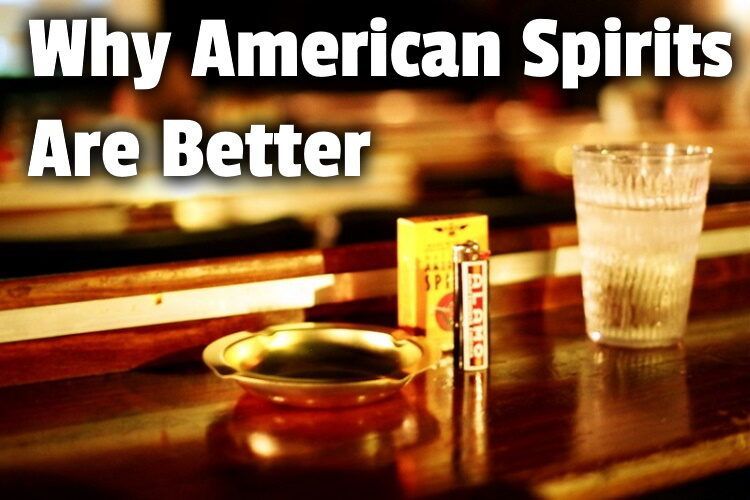 You know that American Spirit products are cool and all, but are they really organic or additive-free? And how does that really impact you? Let’s look at why American Spirits are better.

American Spirits are slow-burning with a rich flavor, so they are enjoyed for a longer period. On the whole, it is great value for money.

In this article, we’ll explore some interesting facts about the brand in further detail. We’ll find out what makes American Spirit different and who bought out American Spirit. But, we will also find out whether R.J. Reynolds started putting additives in the cigarettes after its manufacturer was acquired.

When Killer Flies was published the New Mexico organic cigarette Natural American Spirit was a thing. I think they are still around… or maybe the flies got them 😱 pic.twitter.com/DB5xfuRDEQ

American Spirit cigarettes are different because they are additive-free and are made from domestically grown tobacco, some of which are organically grown. As such, fewer pesticides are used, and there’s relatively lower deforestation occasioned by growing tobacco from where they are manufactured.

Additives are used to make smoking a more pleasurable experience because they help mask the harshness of tobacco and aid the delivery of nicotine. American Spirit does not contain additives.

One of the additives that are used in many cigarettes is saltpeter. Its purpose is to make the cig burn faster! A sneaky way to make you buy and smoke more.

Another vital difference is that American Spirit does not use “sheet tobacco.” These are the residues of stale cigarettes that have been returned by retailers, which, as you can imagine, would impact the flavor adversely. American Spirit cigarettes have a rich flavor and, because they burn longer, offer greater value for money.

You also have an array of choices depending on your preferences. There are 8 different types, with slightly varying compositions of nicotine, tar, and CO. The below list shows the types available:

Can you order American Spirits through Instacart?

I don’t advocate smoking (I quit years ago) but American Spirit is a decent additive-free cigarette brand. I was partial to the yellow/mellow pack. ✌🏻 pic.twitter.com/VTNckIy8RC

Who bought out American Spirit?

Reynolds American, Inc. bought out American Spirit from the original owners. It is a subsidiary of British American Tobacco and is the second-largest tobacco company in the United States.

Its subsidiaries manufacture and market an array of tobacco products, including cigarettes, electronic cigarettes, and moist snuff.

Let’s find out a bit more about Reynolds American.

R.J. Reynolds was established as a tobacco company in Winston-Salem, North Carolina in 1875, while Reynolds American was formed in 2004 and began trading on the New York Stock Exchange in the same year.

And in the same year, the U.S. business of British American Tobacco combined with that of R.J. Reynolds Tobacco Company under the name “R.J. Reynolds.”

After the combination, R.J. Reynolds became a subsidiary of Reynolds American.

Can you order cigarettes through DoorDash?

No, R.J. Reynolds did not start putting additives in American Spirit cigarettes after it acquired it from the original owner. In point of fact, R.J. Reynolds is one of the companies that developed the natural additive-free approach to producing cigarettes.

In other words, a change in the ownership structure of the company has had no effect on the composition of American Spirit products. It is still free of additives that are common to most other cigarettes.

Even though R.J.Reynolds owns the brand, it is actually manufactured by one of its subsidiaries, Santa Fe Natural Tobacco. It’s because it’s still additive-free that it is popular with folks who are more environmentally conscious.

I bet you would like to know why. That’s what I get into in a recent article. I looked at whether tobacco additives make cigs burn faster and explored whether American Spirit contains additives. I also revealed whether a slow-burning cigarette is bad for you.

According to research by Professor Anna Epperson, respondents perceived Natural American Spirit as safer than other cigarette brands and believed the tobacco product was owned by American Indian tribes—all because of what they saw on the cigarette pack. https://t.co/bPkiEg3yI7 pic.twitter.com/cuyF50Fe1C

American Spirit cigarettes and loose tobacco are made by Sante Fe Natural Tobacco Company. The product packaging describes them as “100% percent additive-free, and some of the products are made with organically grown tobacco.

Organically-grown products, as you know, are healthier than their inorganic counterparts. This is mainly because chemicals such as pesticides are employed in their cultivation.

The real issue some experts point out is that inorganic or organic, tobacco contains substances that can have adverse effects on health, especially when dried and smoked or ingested in some other form.

But do they use animal products in making or processing their cigarettes?

I looked at examples of cigarette brands that are vegan and which cigarette companies do not test on animals. And I revealed whether American Spirits’ filter contains pig’s blood!

IS organic always better? 64% of American Spirit smokers really believe their cigarettes are less harmful, even though organic cigarettes are just as bad for you as any other cig. pic.twitter.com/OVYT6RgwS5

There’s no such thing as the healthiest cigarette. It’s telling that each pack of cigarettes comes with a warning label. Even though the composition may vary slightly, they all contain tobacco, which is known to be unhealthy.

Irrespective of the cigarette brand, the composition is almost always identical in terms of the nature of the content. Naturally, the quantity varies.

What about light, rolled, natural or herbal cigarettes?

Are “light” or “low-tar” cigarettes better? Unfortunately, no. They aren’t any better. The FDA has banned the use of terms like “low”, “mild”, and “light” in cigarette advertising because it gives the impression that cig labeled such is somehow healthier.

Hand-rolled cigs ought to be better, right? Not really. The American Cancer Society says on its website that folks who always have smoked hand-rolled cigarettes have a greater risk of developing lung cancer.

In a nutshell, smoke from all cigarettes contains carcinogens (cancer-causing chemicals) and toxins resulting from burning tobacco leaves, including carbon monoxide and tar.

But, we also found out whether R.J. Reynolds started putting additives in the cigarette after its manufacturer was acquired. We learned whether they are made from organically-grown tobacco.

Lastly, we wrapped things up by exploring what the healthiest cigarette is.

Image by sean mason is licensed under CC2.0 and was cropped, edited, and had a text overlay added.

link to Why Does American Spirit Burn So Slow?

A lot of cigarettes burn fast. After a few puffs, they seem to have vanished. American Spirit does not belong to this category, and you’ve probably wondered, why does American Spirit burn so...