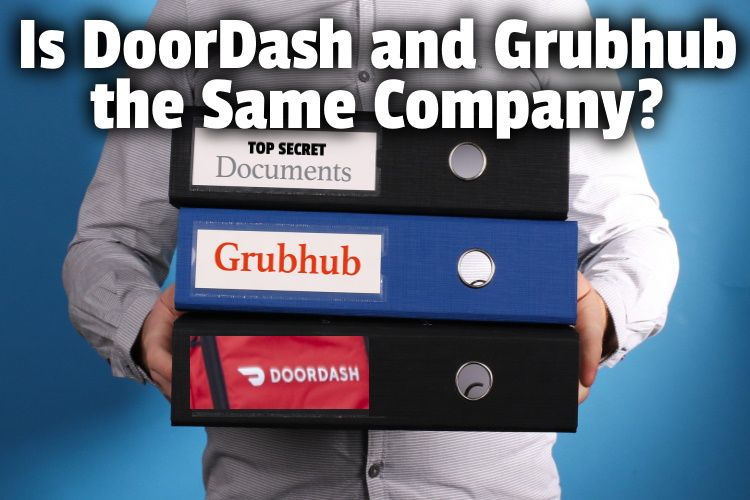 Food delivery apps are all the rage now, and for a good reason. They make food ordering and delivery super-convenient. But, telling them apart can be challenging. You’ve probably wondered, is Doordash and Grubhub the same company?

In this article, we’ll explore how DoorDash differs from Grubhub and which one of them marks up its prices. Then, we’ll look at which company pays better, and we’ll wrap up by finding out who the best delivery service is.

How is DoorDash different from Grubhub?

Let’s check out other differences.

While using DoorDash, you have to pay a service fee, delivery fee, and tips to the Dashers (this is optional). The service fee is paid to both DoorDash and the restaurant you’re ordering from.

Grubhub, too, expects you to pay a service fee, delivery fee, and tips are also optional. But, it doesn’t require a restaurant service fee; instead, it requires some minimum order amount.

Both apps offer a lot of special promotions. But in this regard, DoorDash doesn’t offer as much as Grubhub.

And, on average, you’ll get greater savings via the latter. For those who would rather use DoorDash, it offers a Cash App debit card.

They both have subscription services.

DoorDash’s subscription service is known as DoorPass. It has a trial period of 30 days, and you get free delivery and reduced service fees on orders above $12. It costs $9.99 per month and can be canceled at any time.

Grubhub’s subscription service is known as Grubhub+. You get free delivery on all your orders. If you’re a giver, you’d also love the fact that your donations to No Kid Hungry will be matched.

You also get additional benefits such as access to special menus, elite care, and events.

Both apps are available on Android and iOS, but DoorDash has a better user interface. It’s more neatly arranged and easier to navigate. Grubhub’s UI/UX needs more time before you really get it.

Does DoorDash markup prices from restaurants?

DoorDash does mark up the prices from restaurants by an average of 32.8%. But the rate of the markup is not uniform and is less than that in some cases.

So just like Instacart, DoorDash and other delivery services do mark up products to help cover costs.

It has thousands of dashers that are relatively well-paid and, of course, its administrative staff, too. On average, the markups can be a bit steep. At times, they can be up to 20% or more.

As I mentioned above, an informal study conducted by techcrunch.com shows that DoorDash marks up the restaurant’s prices by an average of 32.8%.

But, this is not the only reason why the total cost of a meal could be high. It’s because restaurants at times charge higher prices for orders made via apps.

Does Grubhub markup prices from restaurants?

Grubhub does mark up the prices from restaurants, by an average of 17% which is almost 16% less than DoorDash’s markup.

Again, as with DoorDash, marking up prices is a business model that all food ordering and delivery apps use.

Without the markup, they cannot survive or make a profit. After all, Grubhub incurs expenses in having the software infrastructure that powers its apps and its team of delivery people.

Again, as mentioned, an informal study conducted by techcrunch.com shows that Grubhub marks up the restaurant’s prices by an average of 17%. In the study, Grubhub’s (Seamless) markup is indeed the lowest.

Just as in the case of DoorDash, this is not the only reason why the total cost of a meal could be high. It’s because restaurants at times charge higher prices for orders made via apps.

Why does Instacart charge more?

In a recent article of mine, I explained that it does not always charge more. It’s when a customer is buying from a store with whom it doesn’t have a partnership that it charges a bit extra. Check out the article to get the full scoop.

Who pays better: Grubhub or DoorDash?

Grubhub pays more than DoorDash. With DoorDash, drivers earn $2.00 to $10 per delivery based on distance. With Grubhub, drivers earn an average of $12.00 per hour. Additionally, Grubhub not only pays drivers based on miles but also the time in traffic when short distances take longer.

And with both companies, delivery personnel are independent contractors and not employees. But while some would tell you they make more from Grubhub, others swear by DoorDash.

Let’s look at their pay model.

Grubhub pays for mileage (pick-up and drop-off), the time for driving and waiting, and 100% of the tips.

DoorDash’s pay model is the total of the base pay + promotions + tips. Base pay is a combination of time, distance, and earnings. It ranges from $2-$10. Promotions include Peak Pay, Challenges, and Drive.

Peak pay is earned for delivery during busy hours. It ranges from $1-$14. You can earn from Challenges when you deliver a set number of orders within a set period. Earnings related to Drive are not common. It’s paid for large orders.

So sometimes, it is possible for DoorDash drivers to earn an average of up to $15 per hour, while Grubhub drivers get $13.

Is Instacart and DoorDash the same company?

No. Instacart was founded by a former Amazon employee Apoorva Mehta, while DoorDash was founded by Tony Xu, Andy Fang, and Stanley Tang. Check out a recent article of mine where I share a lot more.

Who is the best food delivery service?

DoorDash is the best food delivery service. This is reflected in the fact that its market share is 56% and growing. It’s present in the U.S., Canada, and Australia. It has 20 million consumers, serves 450,000 merchants, and has 1 million delivery people.

One of the “secrets’’ of DoorDash’s growth and dominance, even though it’s not even up to a decade since it started in the competitive food delivery sector, is its technology stack.

It leverages artificial intelligence and machine learning to be able to coordinate and optimize the millions of deliveries that have to be made in such a way that it satisfies merchants, dashers, and consumers all at the same time.

Both are used to model the decision space and ensure that optimal decisions are made in seconds.

It also has a simple, intuitive, and beautiful user interface, which makes it easy for users of its services to get what they want, and it tends to be cheaper on small orders.

Yes, it does. But, some restaurants do not allow it, while others may require a food purchase. In a recent article of mine, I offered the full story.

In the article, we checked out DoorDash and Grubhub.

We learned that they are not the same company. They were founded by different people and at different times. In fact, about a decade apart!  We found out that both mark up their prices and that DoorDash pays better. But while Instacart says no to Shoppers having others in their car while working, DoorDash allows passengers.

And we concluded by finding out which is the best food delivery company in the country.

Grubhub. Businessman is carrying a stack of 3 file folders on blue background by Jernej Furman and A Street Scene on Granville Street, Downtown, Vancouver during coronavirus pandemic by GoToVan are licensed under CC2.0 and were cropped, edited, merged, and had a text overlay added.

link to Can DoorDash Deliver Cigarettes?

As you probably know, your fave meals can be ordered with DoorDash, and even groceries and liquor. But can DoorDash deliver cigarettes?  Here’s what I found out: DoorDash can deliver...

Continue Reading
link to Are DoorDash and Instacart the Same Company?

There are a couple of companies providing online grocery ordering for pickup or delivery. It can be a bit confusing telling them apart. But a lot of people ask me, are DoorDash and Instacart the same...