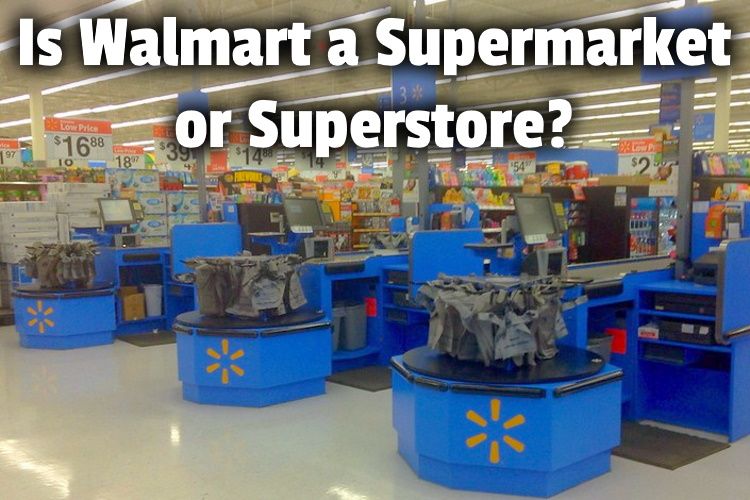 Grocery store, superstore, supermarket, hypermarket, and supercenter. Consumers often use these terms interchangeably, especially when addressing their favorite go-to shopping and grocery places such as Walmart. On that note, you might be wondering too: is Walmart a supermarket or superstore?

Here’s what I learned:

Walmart is a superstore, not a supermarket. Superstores are larger than supermarkets and sell at highly discounted prices and they also sell clothing and home goods not typically found at supermarkets.

What the heck is the difference with all the terms?

And do they really matter? And are there common things you will and won’t find at superstores and supermarkets and other types of stores? Let’s get into all the similarities and differences including the 1 thing they all share in common.

Let’s cut to the chase.

All I see is the WalMart logo pic.twitter.com/nf8qWeJ9LC

What is the difference between supermarket and superstore?

What’s a supermarket? What most of us call grocery stores are actually supermarkets. Really? Yeah.

Which begs the question: what’s a grocery store? (And how is it different from a supermarket?). First off, grocery stores have existed a lot longer than supermarkets. Supermarkets are relatively recent.

Supermarkets, on the other hand, are stores that stock much more than grocery stores and are much larger. A typical grocery store might be 40,000 to 60,000 square feet.

Superstores, on the other hand, will always be well over 100,000 square feet.

In a supermarket (what we call grocery stores), you’ll find an array of food products, drinks, baby products, small appliances, etc. Superstores have all that too. But they also carry clothing, electronics, toys, hardware, and household goods and linens.

elf on the shelf meet paul blart on the walmart pic.twitter.com/DjJaHOhIRK

Is Walmart considered a supermarket?

No, Walmart is not considered a supermarket. Walmart is actually a superstore or a supercenter. That being said, Walmart does have a small number of grocery stores called Walmart Neighborhood Markets which are not superstores.

Superstores are larger than supermarkets and sell in high volume at highly discounted prices.

It’s the theory of the slow dime or the fast nickel. Grocery stores, especially smaller mom-and-pop shops or gourmet niche grocers tend to price things a little higher. They don’t get a crazy volume of business (compared to Walmart) but they make decent money; the slow dime.

Walmart, on the other hand, can get by with a lower profit margin because of how much stuff they sell. They may not make as much per jar of ketchup, but selling 100 times as much of it, they are OK with only making 15 cents profit for that jar; the fast nickel.

Folks can get their groceries from a lot of places now, including warehouse clubs and superstores. A substantial amount of people buy online now either for pickup or delivery.

And that phenomenon hasn’t escaped Walmart either.

This is what I explored in a recent article of mine, where amongst other themes, I showed you how and why grocery stores are organized the way they are. It’s an interesting and in-depth expose (after all, I was a general manager at Whole Foods).

Walmart is the biggest offline store in the world and now they buy the 77% shares of Flipkart so they can surpass the Amazon in the online market#DigitalMarketing #Walmart #FactsMatter #Facts #SearchEngineOptimization pic.twitter.com/HC102Rgp4L

How is a supermarket or superstore different from a grocery store?

They sell a lot of things that have small margins. The plan is to make money from a huge number of people who are buying. So, their prices are relatively lower. Supermarkets and superstores are also almost entirely large chains. By comparison, grocery stores often charge higher prices and are more often privately owned.

We can think of these different stores as a product of evolution. The grocery store grew into supermarkets, and supermarkets evolved into superstores.

They’re all better ways of serving the customer.

A long time ago, we’d probably have to walk from one market to another before we can buy what we need. Our grandparents would go to the butcher, then the cheese shop, then the produce market, etc.

Superstores and supermarkets are attempts at making buying a more convenient and more affordable experience.

Superstores do not focus on having highly attractive environments; they’re more like warehouses. Grocery stores place orders based on demand, while supermarkets and superstores order their inventory in bulk.

Does Walmart count as a grocery store for Discover?

Walmart does not count as a grocery store for Discover. Walmart is seen as a superstore. This classification as a superstore excludes it from many credit card company’s grocery categories.

To qualify, make sure you didn’t buy at Amazon, Walmart, Costco, or similar stores.

But, you’ll likely get the points if you bought from Walmart Neighborhood Market (seeing as they sell grocery exclusively).

Have you ever wondered why grocery stores change their layouts?

I offer the inside scoop in a recent article of mine. I promise it’s not done just to make us mad. There’s actually a science behind it, and computer programs are used to design and re-design the layouts. All of it is done to help increase profits for the store. How does it work?

Need on a graphic tee. pic.twitter.com/PvXLtmXe7g

Was Walmart always a superstore?

Walmart was not always a superstore. Sam Walton’s first store was Walton’s 5&10 store. But the 1st store called Walmart was a discount store in Rogers, Arkansas, opened in 1962.

Walmart is a testament to the innovative and principled leadership of the founder, Sam Walton. Today, Walmart is the largest retailer in the world!

Sam’s Club, a subsidiary, opened in 1983. It’s instructive to note that it was initially concentrated in the relatively rural parts of America when it started. But gradually, it became a national and then an international brand.

It wasn’t until 1987 that it opened the first superstore (hypermarket). It was a combination of a grocery store, merchandise market, and other services such as video rentals and restaurants. The superstores were averaging $1,000,000 per week, compared to $200,000 that was being made at regular stores.

In 1988, its supercenters debuted. They are a combo of discount stores and grocery stores.

In 1988, it also rolled out its more intimate and personal neighborhood markets. The idea is to have them compete with traditional grocery stores and convenience stores.

It’s natural to wonder if there are other differences between grocery stores and supermarkets.

The answer is yes. In a recent article of mine, I shared these differences. What really surprised me was how much lower the profits are at a supermarket compared to a grocery store.

In the preceding paragraphs, we explored whether Walmart is a supermarket or a superstore.

It’s actually a superstore. In fact, it’s grown beyond superstores! We also looked at the difference between a supermarket and a superstore.

And we looked at whether Walmart is a supermarket or a grocery store and whether you could earn bonus points when using Discover to purchase groceries at Walmart.

Walmart by Mike Mozart is licensed under CC2.0 and was cropped, color-adjusted, with a text overlay added.