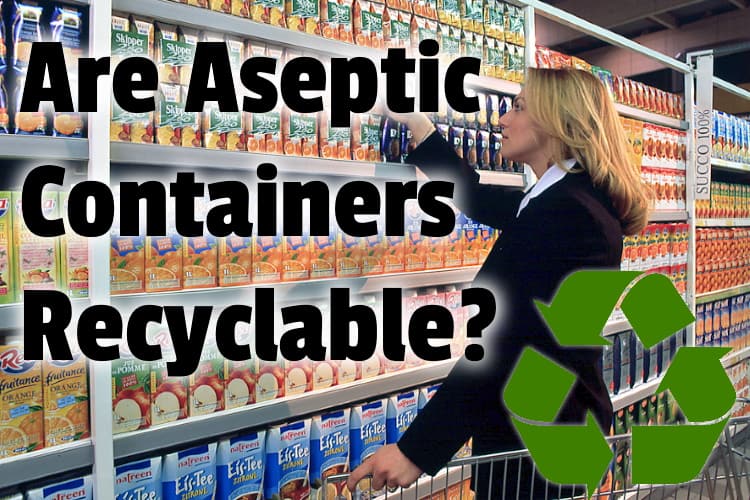 Here’s what I’ve learned after selling them for years:

Aseptic cartons, which are made of layered paper, aluminum foil & plastic can be recycled in many major cities. But they are not always accepted curbside. Some cities have drop-off locations, but others don’t have a recycling option at all. In cases where it is not available, they can be mailed to recycling centers.

But there’s a lot more to know about them, why they are used and what the best thing is to do with them when you’ve emptied one, including the greenest thing you can do with them.

What is an aseptic container or carton (also known as a Tetra Pak)?

Here are some of the most common food and beverages to be packaged in aseptic cartons:

Aseptic processing, in one form or another, has been used since 1927. But it wasn’t until the 1940’s that the technology really flourished and became widely used, especially by Dole.

Back then it was just a method of pasteurizing foods and packaging them in ways that didn’t require refrigeration.

However, the packaging we see today on our grocery shelves came about in 1959 and was referred to as tetrahedrons. The cartons are made by layering paper, aluminum foil, and plastic.

Luckily, all three of those materials can be recyled. However, the challenge comes with separating the layers. For that reason, as we’ll get into more below, they can’t always be recycled curbside.

Tetra Pak is a company that makes packaging like this, so Tetra Pak is simply a brand name.

They introduced this packaging in the US in 1962. However, at the time the cartons were hard to open and did not sell well.

However, they were widely used by the US Navy.

Other kinds of similar cartons are often found in the dairy section, selling milk, Silk non-dairy milk, and liquid egg whites. These cartons are officially known as gable-top cartons.

Here’s is a visual guide to the new service starting on Monday 30 September. We are unable to collect cartons (Tetra Pak) in the green-lidded recycling bin. Please place cartons in your black residual waste bin. Black bin waste is not landfilled, it is burnt for electricity. pic.twitter.com/X1QQJ46tSt

Can you recycle Tetra Paks or chicken broth containers?

The short answer is yes, but you’ll need to check your town’s recycling policies to see if you can recycle them curbside.

Recycling companies have to have the technology to separate the paper layers from the plastic and foil, and not every company can do that.

Want to know if your local recycling company can recycle aseptic cartons? Luckily Carton Council makes it easy to check with your zip code. Just click that link to check your town.

I live outside of Austin, Texas, but I used a central Austin zip code (78704) to see what options Austin has. Unfortunately, I got this message in checking “SORRY, CARTON RECYCLING IS NOT AVAILABLE IN YOUR AREA YET.”

Ironic given how progressive is (especially compared to Dallas which does allow them to be recycled curbside.

I went on to check several major metropolitan cities with the following results:

So clearly the technology to recycle is available and may be a curbside option in your town. But you should check your zip code to be sure.

Other towns have drop-off locations when curbside is not available.

Why is aseptic packaging used?

Quite simply, aseptic packaging allows manufacturers to take something that would normally require refrigeration and enable it to be sold and transported without refrigeration.

In fact, they don’t have to be refrigerated whatsoever until opened.

Aseptic cartons are a great way for manufacturers to make large quantities of products where normally they would have to make small quantities due to short expiration dates.

With aseptic containers, it’s not uncommon for cartons to be dated for up to 1 year ahead of time. So convenience, both for consumers and manufacturers is the #1 reason they are used.

From a green standpoint, although they can’t always be (easily) recycled, they don’t require refrigeration in trucking, warehousing, or selling.

Since aseptic cartons also weigh less than cans or glass bottles, they also use less fuel being distributed across the country.

Stevenage residents can put juice cartons (Tetra Pak) in with paper and cardboard in your blue recycling box, from tomorrow. pic.twitter.com/yShGdwq91g

Why do aseptic containers have a recycling symbol on it if they can’t always be recycled?

As we got into the above, they can actually be recycled curbside in many (but not all) cities.

But, oftentimes the manufacturer puts the symbol on there to indicate they are using recycled or recyclable materials to make the carton.

Tetra Pak, for instance, claims all of their cartons “are made of renewable materials, recyclable paperboard”.

But since recycling is possible, they are labeled that way. The good news is that, according to Tetra Pak, carton recycling has increased 350% since 2009, so that’s a lot of stuff NOT hitting the landfill!

Do aseptic containers have to be trashed if my town doesn’t recycle them?

No, is the short answer. You can save the local landfill and do your part to recycle by mailing them to a recycling center.

Here is how to do that:

Did I cover all you wanted to know about aseptic cartons and whether they can be recycled?

In this article, we took a quick look at the world of Tetra Pak packaging, also called aseptic cartons or containers.

This type of packaging is found all over the grocery store, from chicken broth to non-dairy milk, to tomatoes. But while the containers often have the recycling symbol on them, many people have asked the question are aseptic containers recyclable?

Sadly, they are not always easily recyclable, despite being marked that way.

But more and more cities are starting to get on board with recycling them. Many cities now allow them with curbside pickup, while others have local drop-off centers.

As a last resort, there are centers you can mail aseptic containers to for recycling.

link to Are All Brands of Baking Powder Aluminum-free?

It has been an ongoing debate on whether aluminum is harmful or not, and baking powder is one ingredient that sometimes contains aluminum. The good news is that some brands of baking powder are...

Continue Reading
link to Can You Fire an Employee for Social Media Posts?

Almost everyone uses social media these days. However, for employers, it's a tough call as sometimes employees' social media posts are either embarrassing or outright critical of the company. But...

Hi! I'm Jeff Campbell. I was a leader for Whole Foods Market for over 2 decades. I worked in 9 stores in 4 states, not counting the hundred-plus stores I've assisted in other ways. I was a Global All-Star, a Gold Pen Winner, and won Top-10 Store (company-wide) 3 times in addition to Best New Store (company-wide). These days, when I'm not spending time with my wife & 3 daughters, I can usually be found practicing martial arts, consulting for others in the industry, and blogging on my other blogs over at KitchenApplianceHQ.com and Middle Class Dad.

The Grocery Guy is owned and operated by Jeff Campbell/Middle Class Dad. Middle Class Dad is a participant in the Amazon Services LLC Associates Program, an affiliate advertising program designed to provide a means for sites to earn advertising fees by advertising and linking to Amazon.com. Middle Class Dad also participates in affiliate programs with Siteground, Clickbank, CJ, BuyerZone, ShareASale, and other sites. Middle Class Dad is compensated for referring traffic and business to these companies, but in no way increases the cost to you if you opt to make a purchase from my links. *Please note that I am not liable for quotes, products, claims or any work performed through BuyerZone or its suppliers.


Book a Consultation with Me!