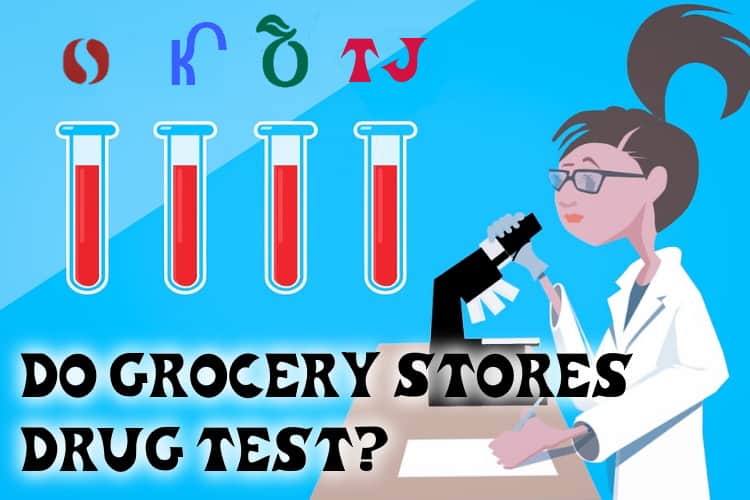 A grocery store career can be a great one. But for those first starting out or looking for their first job, it’s not uncommon to wonder do grocery stores drug test?

Yes and no. Some grocery stores drug test, especially big chain stores that stretch across the state or country. However, smaller chains may be less strict about it. Whole Foods Market is the largest chain to not typically drug test.

But there’s a lot more to know about grocery stores, drug tests, and which ones do them. So let’s keep going.

In the rest of this article, we’ll answer some essential questions related to grocery stores and drug testing:

When you are looking for your first job, you may not have any idea about all the different positions in a grocery store.

In a recent article, I break them all down, including which ones tend to pay the best. Just click that link to read it on my site.

A grocery chain fired a cashier for refusing to take a drug test without a union rep present. In this case, that’s perfectly ok: https://t.co/nKjouZK03H pic.twitter.com/RaQPpjnirw

If you’re applying at a grocery store, the store is likely a chain. While there are thousands of stores around the world that are not attached to large corporations, you’re probably applying to one of the big grocery chains.

Here are a few of the largest chains and their drug test requirements:

Safeway drug tests 100% of their employees. If you’re applying for a job, you should expect a drug test before being hired.

These tests can be either a saliva or urine sample and are often done at a local clinic. The clinician will send the test in for analysis, and the lab sends the results to the Safeway management.

Another situation in which Safeway performs a mandatory drug test is if an employee gets hurt at the workplace.

This necessary test happens because they need to see if the employee was under the influence of a drug when they were injured. If this is the case, the employer is often not responsible for the accident.

Kroger is another big brand that performs drug testing.

They usually check for more than just marijuana, which is the most common drug typically tested for by most grocery stores. This test is mostly a saliva swab, though the method can vary from store to store, as some of them prefer to use a urine sample.

Once the clinic or office gathers the information, they send the results to Kroger, who makes a hiring decision based on the info.

Whole Foods is a rare outlier, as they don’t always require drug tests before hiring their employees. However, employees who get hurt at work may be subject to a mandatory drug test.

Certain Whole Foods locations will drug test potential employees who will work around heavy machinery. And the warehouses will likely test drivers.

They test these people because they need to ensure the employee is sober when operating dangerous equipment.

But I can tell you in my 20+ years as a leader at Whole Foods, I was never drug tested, never had anyone drug tested. And I was not aware of anyone ever being drug tested. So if you plan to work in a store, you’ll likely never be drug tested.

There are a few Trader Joe’s locations that have been known to drug test potential employees, although it’s not nearly as frequent as other prominent chain store locations.

Aldi performs drug and alcohol screenings for all potential employees. They deal with heavy packages and deliveries, making it a company requirement to work around potential hazards.

These tests protect the company if an employee fails a drug test after an accident happens. They usually go with a saliva test, although a urine sample is also possible.

When used in a legal manner an American should not have to worry about losing their job for testing positive for cannabis.

Medicinal patients should be protected when they test positive for workplace drug testing.

We must protect law abiding Americans from persecution! pic.twitter.com/a4votXp2I5

What Does an Employer Drug Test Look For?

If you’re considering working at a grocery store, you should know which substances they test for. Most employers do a saliva test, which often tests for marijuana, cocaine, methamphetamines, and even alcohol.

Here are most of the drugs tested for during grocery store drug tests:

Some companies frown upon alcohol in their tests, but this can vary from company to company.

In most circumstances, it’s not an issue unless the employee consumes alcohol before or during work. You should contact the company that you want to work for if you’re concerned about alcohol testing.

If you are applying for a driving position, alcohol in your system could be a dealbreaker.

So Your Employee Failed their Drug Test? Strategies to a Drama-Free Approach https://t.co/2siJzRPF4c pic.twitter.com/uGv9VwswOz

Do Employers Tell You if You Passed a Drug Test?

Employers will almost always inform you whether or not you passed the drug test.

If you passed, they either offer you the job or move forward with the hiring and interview process. Employers don’t typically hire applicants who fail drug tests.

Just because you haven’t received a call within a few days of submitting a urine or saliva sample doesn’t mean you failed.

Employers don’t always receive the results right away, and even if they do, there are other company problems to deal with as well. They have to test all potential employees before they decide who to hire.

Another reason that you might not have received a call for your drug test yet is that some clinics don’t send results on weekends.

You might’ve taken the test on a Thursday, but the company might not receive the results until Monday or Tuesday. Once they get the information, they will call you with the results quickly in most cases.

If you haven’t received a call in a couple of weeks, there’s still no need to panic.

You might even be notified via mail or email. Not all companies send out a phone call with the results, so keep an eye on your inbox and mailbox. Most companies won’t leave you in the dark since they know that you’re waiting for the results.

Can You Retake a Drug Test if You Fail?

Unfortunately, you cannot retake a drug test for a job.

There are no retests because the tests are extremely accurate, reducing the chance of error to almost zero. If you retake the test, it can give you time to flush the drugs from your system, which is the main reason that companies don’t allow retesting.

If you’re applying for an important job or one with minimal applicants, you can dispute the results. You still won’t be able to retake the test for the reasons mentioned above, but there’s a bit of hope if it truly was an error.

It’s also good news if the company requested a urine sample as well as a saliva swab.

When you dispute a drug test, your first and only sample is reanalyzed. You can’t take another, but the clinic performs the test as if it were a new sample. Since the sample is stored correctly, substances cannot leave or enter the container.

Once your results are reanalyzed, you’ll receive a notification through a phone call, mail, or email with the new results.

Did I cover all you wanted to know about whether grocery stores do drug tests on employees?

In this article, I reviewed a question many prospective employees wonder when applying for some of their earliest jobs; whether or not grocery stores drug test.

We reviewed several aspects including:

In short, while some grocery stores won’t really care that much if you smoke weed occasionally, do yourself a favor and avoid doing anything while job hunting.

Trust me, you’ll be a lot happier with a good job and income to get your career started.

Considering a job at a grocery store?

I have a recent article that breaks down the best tips and strategies to get the job you want. What might really surprise you is how doing just a little bit of pestering can make all the difference.

Kroger logo on company website displayed on computer screen with ripple effect by Ivan Radic is licensed by CC2.0

WFM_Logo_LargerR_Kale_Green_RGB_square_smaller by Virginia State Parks is licensed by CC2.0