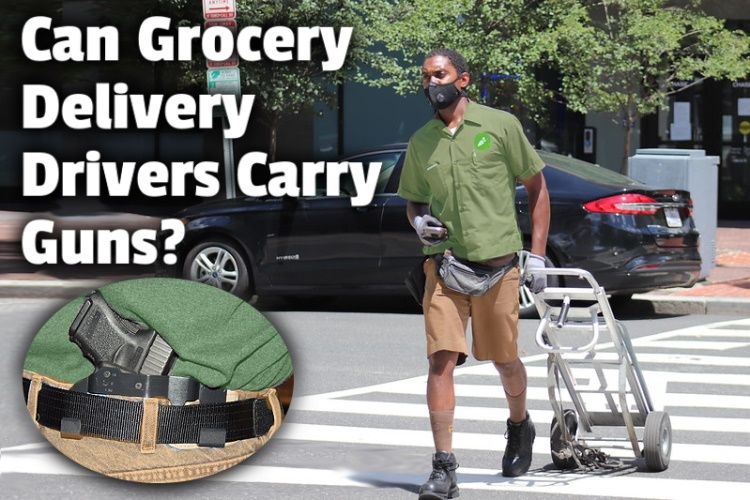 It’s not always a safe world out there. And with more and more people ordering groceries online for delivery, that can open up some risk for both a driver or the person receiving the groceries. That led me to wonder, can grocery delivery drivers carry guns?

Here’s what I discovered looking into it:

A delivery driver with a legally purchased and registered firearm can carry a gun on their person or in the car if they have either an open carry permit or a concealed carry permit. However, certain employers, such as Instacart, may have rules prohibiting their drivers from carrying guns while working.

But, of course, the laws do vary somewhat from state to state in addition to rules laid down by employers.

Is it safe to allow delivery drivers into one’s home? Or should you simply ask them to leave your groceries by the door? Is being a delivery driver a risky occupation?

These questions and similar ones are what we’ll address in the next few minutes. In this article, we’ll look at the facts about whether grocery delivery drivers can carry Guns.

Ready to apply with Instacart and see how much you could make?

Yeahhhh I guess you could say I’m a good instacart driver 😜 pic.twitter.com/TN1GjoChEp

Instacart’s Independent Contractor Agreement has no mention of firearms, making it acceptable for Shoppers who are independent contractors to carry a gun with the appropriate permits for the city and state they reside in.

I was unable to verify Instacart’s policies for Shoppers who are part-time employees or even full-time employees. Independent contractors don’t actually work for Instacart.

They work for themselves, and Instacart pays them via a 1099 form rather than a W2 at the end of the year. Independent contractors tend to have greater flexibility but less job security and certainly no benefits.

Originally all Instacart Shoppers (both drivers and in-store shoppers for pickup) were independent contractors.

But, after a lot of criticism, there has been a push by Instacart to transition a certain percentage of drivers over to part-time employees.

But whether an independent contractor or an actual employee, are you allowed by Instacart to rate customers?

I explored the issue in a recent article of mine. After all, customers can rate Insta employees, so it seems only fair the same could be done in return. That way, other drivers know to avoid someone creepy or pervy. But can they?

To find out more, click the link to read the article on my site.

Add this to the list of doordash memes my driver has sent me pic.twitter.com/jBJUZIggoV

DoorDash does not have a posted policy preventing Dasher delivery drivers from legally carrying weapons such as guns. However, Dashers still need to legally own, register, have the appropriate permits, and follow posted rules when entering a delivery business.

Some restaurants or grocery stores may prohibit firearms on the premises. So, you’ll need to pay attention to that.

Even in some states where you’re allowed to carry, you’re not allowed to have your weapon on you in some places, such as schools.

Walmart is one of the giants in the grocery sector.

You might be curious if DoorDash handles delivery for the superstore. That’s the theme of a recent article of mine. After all, Instacart charges a huge markup on some store’s prices. Walmart being known for low prices might be better with DoorDash.

Amazon explicitly forbids delivery drivers from carrying guns while making deliveries except where local law prohibits an employer from placing this restriction. This applies to both Amazon Fresh drivers as well as regular delivery drivers for Amazon.

So essentially, if your local city says it’s OK, and you legally own the weapon and have the necessary permits, Amazon can’t tell you otherwise.

So you’ll have to check the laws where you live to be certain.

But when in doubt, avoid carrying a gun while driving for Amazon, as it could cost you your job if they see it or a customer reports seeing one.

The ban, as we’ve seen, is not unique to Amazon. Other companies such as Instacart do not allow delivery drivers to carry guns.

On the whole, delivering groceries is a safe gig. What are some benefits that come with delivering for Instacart? That’s what I explored in a recent article of mine. Is it really a good gig?

Is it safe to let a delivery driver into my house?

It is generally safe to allow delivery drivers into your home. Drivers for all the major delivery companies go through strict background checks. This eliminates those with felony convictions for violent crimes or sex offenses.

We all know that human beings can be unpredictable, and it’s impossible to eliminate all risks in our interactions. But it’s actually safe to have delivery drivers in your home. Before they are engaged, they have to undergo and pass background checks.

For example, Instacart checks an applicant’s criminal history (of course, this is done in line with the applicable Federal, State, or Local laws). It checks driving records, too.

The company ensures it has the applicant’s consent before these checks are conducted.

So, they’re not just random folks being sent to people’s homes. These are people who have been screened. And Instacart knows exactly where their drivers go at all times while they are working.

Grocery Delivery Driver, Star Foreman: “I worry that someone is just going to physically attack me because they see that I’ve got toilet paper on the bottom of my cart.” https://t.co/9QOG7Z6NXv pic.twitter.com/psgYyOEiLw

How many grocery delivery drivers die each year?

About 500 delivery drivers die each year in the United States. However, the majority of those deaths are due to car accidents and not violent crimes.

While grocery delivery is relatively safe, the reality is that it’s risky when compared to some other jobs.

Now and then, grocery delivery drivers are attacked or even murdered. This, of course, is one of the reasons many wonder if it’s okay to conceal and carry.

It’s actually shocking when one considers the incidents of homicides.

It’s sad, but as the stats reveal, hundreds of grocery delivery drivers are killed each year.

Sonya King, a DoorDash delivery person, almost lost her life once when she was attacked from behind.

She struggled until she used her car keys to hurt the assailant or his face and head. There are similar cases, but as we’ve seen above, not everyone’s lucky to escape.

We observed that, as in most cases, it’s the law that’s the judge more than the employer, especially for independent contractors.

Are you considering working for Instacart but are worried about how that could impact your unemployment benefits you’re getting from your last job?

If so, then you need to read a recent article of mine where I explored the theme. After all, a lot of people seek out jobs like Instacart after getting laid off by a more traditional employer. But if you’re getting paid unemployment, can you take a part-time GIG job?

Ready to apply with Instacart and see how much you could make?

IMG_9962 by Elvert Barnes, concealed-carry-holsters by 22860, and Publix Instacart Curbside Pickup West Miami by Phillip Pessar are licensed under CC2.0 and were cropped, edited, color adjusted, merged with a text overlay added.

link to Does Instacart Bring Groceries Inside?

Many people are switching over to grocery delivery services such as Instacart. However, sometimes the person ordering is elderly, handicapped, or might just use some help in getting the groceries up...

The so-called gig-economy is booming, and side hustles are becoming more common. However, if you were let go and are receiving unemployment benefits, it's natural to wonder will working for Instacart...