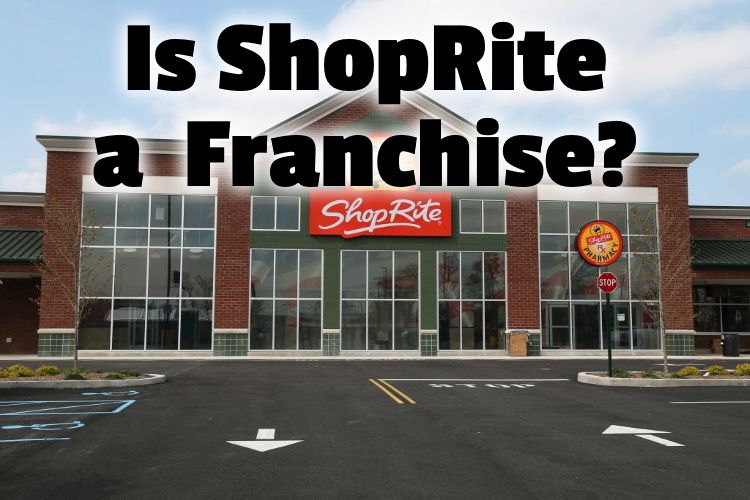 ShopRite is a great store if you’re looking for low prices, lots of deals and coupons, and a decent product selection. They aren’t nationwide, but they still have a lot of stores, so it’s not uncommon to wonder is ShopRite a franchise?

Here’s what I discovered after looking into it:

Technically ShopRite is a retail cooperative and not a franchise with over 50 owned stores and 296 stores affiliated to it. Although these stores are independently owned by members of Wakefern Food Corporation, similarly to a franchise, co-op members elect their own board of directors to run the company as a whole.

But some might disagree with that assessment. So, get ready to soak up all the must-know details!

So what does it mean if a grocery store is a franchise? How does a franchise differ from a retail cooperative? Does either affect pricing or make 1 store in the chain different from the next?

I’ll make it easy for you to identify if a business is a franchise and so much more. Just keep reading!

Who is Shoprite owned by?

The Wakefern Food Corporation owns ShopRite. Technically they are a co-op that includes not only ShopRite but other grocery chains as well. Wakefern operates 28 of the company’s stores, with the rest being owned and operated individually or in small groups by Wakefern co-op members.

Wakefern was founded in 1946 and is now the largest retailer supermarket cooperative of supermarkets in the United States.

It is headquartered in Keasbey, New Jersey, and is the largest private employer in the state. What’s even more impressive is that Wakefern is also the fourth largest cooperative of any kind in the US.

ShopRite is not the only subsidiary of Wakefern.

Wakefern currently has 51 members, with the most recent being Nicholas Market, owned by the Maniaci family.

Before joining the cooperative, Nicholas Market operated four grocery stores in New Jersey. After converting, they rebrand the stores under The Fresh Grocer. Now, ShopRite is a competitor to other large grocery chains for their reasonable pricing and many promotions.

There’s been a recent debate on how ShopRite compares to Whole Foods, the mecca of organic foods.

Here’s my recent article on ShopRite versus Whole Foods. My research will uncover which of the two is cheaper and who has the best produce.

You’ll be surprised about what I’ll reveal about their meat quality.

I’ll also cover their pricing and also share some exciting information about ShopRite’s wines. Just click the link to read that article!

Come back on Monday for The Market Report’s #ShopRiteWeek! #comingsoon #supermarket #shoprite NOTE: The use of the ShopRite name and logo does not imply endorsement of this blog. They are property of Wakefern Food Corp. pic.twitter.com/BmTPLVrPt8

Yes, most ShopRite stores are independently owned and operated. But the Wakefern Corporation does actually operate 28 of the company’s stores directly.

Though the brand ShopRite is owned by the Wakefern Food Corporation, there are 50 ShopRite affiliates.

Most Wakefern members own several ShopRite stores, but there are a few that possess only one each.

These affiliates run their stores, but there are rules and standards set by the cooperative that each franchisee must adhere to.

Here is a full listing of ShopRite’s independent affiliates.

How do you tell if a business is a franchise?

You can quickly identify a franchise by checking the signage of the business and also their marketing materials. Most will have it displayed that they are independently owned and operated.

The franchisor gives permission to the franchisee to use the brand, marketing tools, and goods/service marks. So the business layout and uniforms will be the same as the franchise is just a part of a large organization.

In this case, ShopRite is considered a co-op, or retail cooperative. While in many ways, they function exactly like a franchise, there are a few differences. Notably:

ShopRite is known for its reasonable prices and a wide selection of organic and specialty foods.

It has built its market value by focusing on low prices and convenience. But how does ShopRite compare with a mega grocery chain that has some of the lowest prices in the industry?

Check out my recent article on ShopRite versus Walmart. I’ll cover who has the best groceries, the lowest prices, and their delivery fees.

I did an instacart Shoprite delivery with Shoprite and they had the Beyond Burger + I got the Gardein Meatballs, their Crispy Chick’n Fingers, and the Vegan Qourn Chick’n Patties. pic.twitter.com/7OqXqwihVx

What is the difference between a franchise and an independent business?

An independently owned business does not have the brand recognition a franchise does. They also don’t have access to the nationwide marketing and infrastructure a franchise provides. Franchises also have a higher success rate compared to an independent start-up.

A franchisee is a person who purchases a franchise from the franchisor.

The franchisee has access to many resources, including marketing and training of employees. They basically follow the instructions given. There is the existing knowledge of what works for the business. The new franchise simply becomes a further extension of the business.

On the other hand, independent business is much riskier. An entrepreneur will have to do extensive market research to figure out what will work for their business.

An entrepreneur has no guaranteed guidance from a network, and the risk of failure is much higher. However, there is much room for creativity and innovation in an independent business. This is not the case in a franchise.

What’s the difference between a co-op and a franchise?

The primary difference between a retail cooperative and a franchise is that co-ops have a member-elected board of directors. So owner-operators have a voice in the governing body. But co-op members also don’t pay a franchise fee directly to buy the store, though they do pay to join and have annual dues.

Members of a cooperative can retain more profit because they do not have these fees. However, a cooperative isn’t exactly free to join. There are a one-time membership fee and annual dues.

Most franchisors will require you to purchase all supplies from the franchise. This means that the franchisee won’t be able to get them elsewhere, even if it will save money.

In a co-op business model, you can use the group’s buying power to get the lowest possible prices.

As a franchisee, you cannot change the signage or color scheme of your business. As far as entrepreneurship goes, franchisees have little to no room for creativity. You cannot make product additions or changes on your own. A co-op allows you to run your business; however, you want while maintaining the set standards.

Now you have a better understanding of franchises and cooperatives.

Most people believe that owning a franchise is easy because you don’t necessarily need experience and can be your boss.

Owning a franchise is far from easy.

Here’s my recent article on the Grocery Outlet’s Independent Operator Program. I’ll cover everything you need to know about the program, the agreement, and even the fees. All that and much more will be discussed!

Click that link to read it on my site.

Did I cover all you wanted to know about whether Is ShopRite a franchise?

In this article, I covered a few key questions about franchising.

You learned that ShopRite’s parent company is Wakefern Corporation and that they are one of the largest retail cooperatives in the US.

We also differentiated between a franchise and a co-op. We saw where joining a cooperative could be more profitable than owning a franchise.

ShopRite Atlanta, GA 2 by PatrickRich is licensed under Public Domain