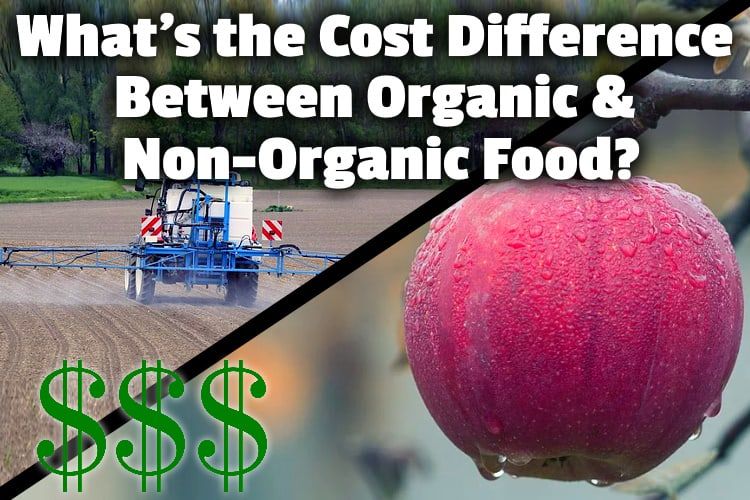 I’ve sold organic and non-organic food for decades but the most common question I get asked by shoppers is what’s the cost difference between organic & non-organic food?

Here’s the definitive answer based on decades of experience:

Organically grown food is between 10%-20% more expensive than the same items not grown organically. The cost difference depends on the type of food item and where you buy it, as the buying power of a large chain can bring the cost down.

But there’s a lot more to know about the cost differences, why organic food costs more, and what you can do to get the best prices.

And if you’re concerned about pesticides and GMOs, we’ll also get into the 12 items you should definitely spend the extra money on to buy organic.

To understand why so many people are willing to spend more money on organic food, we have to know the differences. When it’s all said and done, you might be more inclined to reach for the organic aisle next time you’re at the store.

Let’s take a quick look to see what there is to know.

What is the Difference Between Organic and Non-Organic Foods?

The main difference between organic and non-organic food is that organic food isn’t made with the use of chemical fertilizers, pesticides, and other artificial treatments. Organically-grown foods are regulated by the government, with strict requirements, testing & inspections required.

Non-organic food might be quicker to grow, but there have been some questions about the safety of non-organic foods that have caused many consumers to switch organic alternatives.

There currently aren’t any studies that directly link non-organic foods to health problems. However, the fuss is more about why someone should consume something with pesticides, growth hormones or GMOs in the first place.

To give you an idea of what’s used in the growth process of non-organic foods, here’s a list of a few common additives:

These might all sound a bit scary, but let’s take a step back for a second. Millions of people eat non-organic food every single day. The additives might have intimidating names, but they all serve a specific, justifiable purpose.

For example, herbicides and pesticides are both used to prevent bugs and invasive weeds from getting into the crops. A good representation of this would be the classic worm in the apple. Non-organic apples don’t have much of an issue with worms or other bugs due to the pesticides used.

GMOs and other hormones used in non-organic foods are designed to help grow food quicker. The USA has over 300 million people living within its borders. GMOs help with feeding that many people, and it’s still up for debate whether organic food could feed that many people, much less the entire world’s population.

If you’re worried about all of the pesticides and other sprays used on your food, simply wash them off before eating. In truth, many organic foods still have plant-based pesticides on them. Cleaning any food before consumption is always a good idea.

Are pesticides in organic food safe? What you should know https://t.co/6HKM4TrUuG pic.twitter.com/z6cr2Xid96

As I mentioned above, organic foods are regulated by the government. But they’re still not found at the grocery store nearly as often as so-called conventional foods.

Because organic food is less common, there are fewer growers. And those growers are smaller producers. All of that adds up to higher prices compared to the large multi-national corporate food producers.

After all, it’s much easier for a company to mass-produce hundreds of thousands of apples using GMOs (genetically modified organisms) and pesticides to ensure no bugs eat up half their supply.

But to call your product “organic” farmers and suppliers also have to pay for the certification. The cost to get organic certification can vary but is often upwards of $1,500. No big deal for a large company like Conagra. But a huge deal for your local farmer.
Here are a few examples of non-organic foods that are commonly more expensive than organic foods:

On the other hand, here are some organic foods that are typically more expensive than non-organic foods:

The list for this comparison can go on and on.

Most fruits, vegetables, meat, and dairy products are more expensive when they’re organic. It’s rare to find an instance in these food categories where organic is cheaper than non-organic.

However, grocery stores will occasionally mark down organic food on a sale, which can place the price of organic food lower than the non-organic alternative.

How much more expensive are organic foods?

Now that you’ve seen that the vast majority of food is more expensive when it’s organic, you might be wondering how big the price difference can be.

As mentioned above, meat, dairy, and other produce tend to cost much more. A recent study shows the following:

Another example points towards the massive difference between non-organic and organic yogurt.

However, brown rice and oatmeal were often cheaper when they were organic. Here are two examples of such instances:

There were also suggestions that organic food is sometimes more expensive than another brand of the same organic food.

Aside from brand name preferences, there’s a reason for these price changes. It all depends on the type of groceries and how far away they were sourced.

Organic food that comes from a local farm might be a bit more expensive, but that’s simply because of the qualifications to be considered “organic.” When something comes from far away, a certain level of pesticides (likely plant-based) is necessary to keep them safe from bugs during travel.

Is Organic Food Worth the Extra Money?

Many people concerned about their health, so prefer to spend more on organically-grown items to avoid GMOs, chemical fertilizers, and pesticides since we have not had the ability to study the long-term effects of those.

So, organic food is more than worth the investment to many consumers.

Knowing that they don’t have pesticides and growth hormones provides great peace of mind. While no studies point directly at the negative health benefits of non-organic foods, it’s still nice to know what you’re eating.

But the lack of studies also means we don’t really know the long-term effects of GMOs, pesticides, growth hormones, etc.

I can tell you that many things approved for use in the US are banned in Europe and a lot of that has to do with the large amounts of money that flow from the large chemical producers into the back pockets of politicians and lobbying groups.
The truth is that organic food is worth the extra money if you’re concerned about the additives.

For those of you on a budget, consider buying organic for these items only, known as the “Dirty Dozen” which are the most contaminated foods:

They’re not any more nutritious than non-organic foods, but they’re purer and contain fewer chemicals. In the end, it’s up for you to decide whether or not the price hike is worth it.

Can you guess which fruits and veggies have the highest exposure to pesticides? If you’re trying to avoid exposure you should avoid (or opt for organic) produce that’s high on the Dirty Dozen List. Here’s the scoop: https://t.co/anYL3EUWcj pic.twitter.com/RzZ3VMUFcl

Why Is Organic Food So Expensive?

Organic food is more expensive because of the costs involved with certification and increased pest management costs due to not using pesticides. Additionally, most organic farms are quite small compared to large conventional conglomerate farms, limiting their resources, making it harder to compete.

It’s going to be interesting to see how much the prices rise or lower in the upcoming years for organic food.

But I can tell you as someone who first started working for Whole Foods Market back in 1988, organically grown food has come a LONG way. Back then there was no certification, so anyone could call anything organic if they wanted to. It was also significantly more expensive back then too.

That was because there were so few people growing organically, and the consumer demand was low. As awareness has increased so has consumer demand. That always drives prices down.

Then as demand rose, large chain stores like Safeway jumped on the bandwagon, as did large food producers. All of which help consumers have better prices on organically grown food.
Recent trends have caused many companies to offer organic products to their selection, but will there ever be a time when all food is organic? And if so, will organic food still have high prices?

And if you think organic food is more expensive just so grocery stores can make more money, think again!

Grocery stores actually make very small profit margins. How low? I cover it all in a recent article. I even get into how these lower profit margins can work to your advantage with the prices you pay at checkout.

Did I cover all you wanted to know about organic food and how the price differs from non-organic?

Organic and non-organic food both have the same fantastic nutritional value.

But if you want the benefits of not eating food grown with chemical fertilizers, pesticides, GMOs or growth hormones, it will cost you. On average, organically grown food costs 10-20% more than non-organic.

Here are a few tips for picking out the best deals at your local grocery market:

Want to look for more opportunities to find organically grown items on sale?

It helps to know exactly how and why stores pick certain items for their weekly and monthly sales. Check out this recent article where I break down all the insider tips on grocery store sales, how they get picked and how you can take better advantage of them.