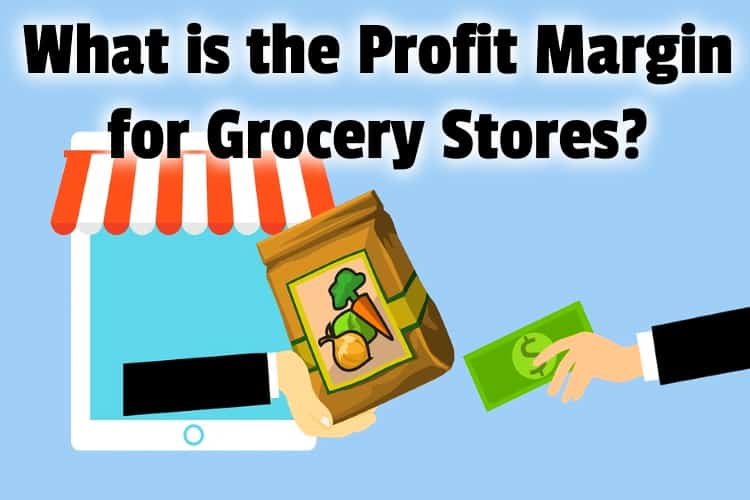 Here’s what I know after many years in the industry:

Conventional grocery stores have a profit margin of about 2.2%, making them one of the least profitable industries in the US. But they make their money by selling in large volume & multiple locations. However, stores in natural, organic, and gourmet niches tend to see bottom-line profit margins of closer to 5-10%.

But there’s a lot more to know about grocery store pricing and profit margins.

So in this article, we’ll explore margins and markups. But also, how a company like Safeway or Kroger might have different profit margins than a Whole Foods or Trader Joes. Ultimately, we’re answering the question of what is the profit margin for grocery stores.

Time to get down to business!

What Are Profit Margins?

You’ll also want to know a little bit more about how grocery stores operate as a business. Let’s walk through both aspects before getting into the actual profit margin for grocery stores.

Profit margins are a commonly used term that has to do with describing profitability in business. A profit margin is the number that represents what percentage of sales a business has turned into profit.

In other words and to put it even more simply, a profit margin shows how many cents of profit a business makes for each dollar of sales. And that’s typically represented as a percentage.

There’s actually a lot more that goes into it than just that, though. So let’s dive in a little further.

Our #wednesdayword for the week is Profit Margin.
This essential business term measures how much profit you keep relative to total sales. There are three types of profit margins: gross, operating and net. Calculate these by dividing the profit (revenue minus costs) by the revenue pic.twitter.com/0fluRjS4vk

The Different Types of Profit Margins and How They Work

If you are confused about the difference between markup and margin, relax. MANY people are confused between the 2. I have a recent article that breaks down both AND shows you how to calculate either one. I also give you a handy chart that shows up number by number what margin a certain mark up is.

Locally-owned grocery store, Fruits, Veggies, and More, is not making a profit, but still stays open for students

How do all these profit margin types tie together?

Think of it like this: a company has a product in its store that it makes a sale on. When the company takes in the revenue from that sale, it has to pay the direct costs of buying that product.

What’s left after paying the direct costs of the product is the gross profit margin.

Next, the company needs to pay its indirect costs, like advertising. Once indirect costs are paid, what’s left is the operating profit margin.

The company will also need to pay other expenses, like debts and charges. Once those are paid, what’s left is the pre-tax margin.

How do taxes impact profit margins?

Like all retailers, grocery stores pay both state sales tax and they pay payroll taxes for their employees.

45 states plus Washington DC have a state sales tax. Sales tax is sometimes paid monthly, quarterly or maybe even annually depending on state law and sales volume for the company.

Payroll taxes are mandated on the Federal level. But they too could be due daily, weekly, monthly, or quarterly depending on the amount of money due.

Once a company has paid taxes, what they’re left with at the bottom line is called the net profit margin.

Whole Foods Market, where I worked as a leader for 2+ decades was fond of doing things differently than many other companies.

So with them, we really only focused on gross profit and net profit. And for them, net profit was where ALL expenses, from marketing, labor, rent, utilities, etc were all deducted from the gross to give us a bottom-line profit.

Why Profit Margins Are Important

Why are profit margins so important? If a company is making money, it shouldn’t really matter, right? Actually, no.

Profit margins are very important because they are indicators of important aspects of a company, like growth potential, management skill, and (of course) financial health.

Ultimately, though, if a store generates a lot of sales, but can’t manage to have a bottom-line profit that is a positive number, they will eventually go out of business unless that can turn that around.

If a store goes out of business, it doesn’t just affect the owner either as every business has multiple stakeholders or people who are impacted by the decisions being made by the owner. Here are all the people that could be affected if a store closed:

So as you can see, poor decisions by the owner of a grocery store can negatively trickle down and affect dozens, if not hundreds of other people.

Why Are Grocery Store Profit Margins So Low?

We briefly described this at the beginning of the article, but grocery stores actually have a very low profit margin.

When you look at successful big grocery store chains and companies like Kroger, Publix and Albertson’s, you probably can’t help but wonder how they’re so successful if they have low profit margins.

Let’s take a look at that.

Conventional grocery store chains have an average profit margin of about 2.2%. This means that for every dollar of sale a grocery store has, they make 2.2 cents of profit.

The main reason grocery profit margins are so low, especially for conventional grocery stores is competition.

There are 38,307 grocery stores in the US according to Statistica. That’s literally 1 store for every 5,459 adults over age 18. Now to be fair, 5,459 sounds like a lot, but it really isn’t when you consider a lot of us just shop once per week.

Now we’re talking only 779 people per day in a store. If that store opens at 8 am and closes at 10 pm, that’s only about 55 people per hour shopping; relatively small.

So with all those stores, and people being more price-conscious than ever and the ability to see many store’s prices and specials on their smartphones, grocery stores have to be way more competitive now than ever before.

Because of those low margins, grocery stores are still considered one of the least profitable industries in the United States due to their low profit margins.

It’s not uncommon at all for grocery stores to have a low profit margin and to make a profit of cents or less on the dollar.

However, grocery stores can be and are still successful despite lower profit margins. So if you’ve ever wondered whether owning your own grocery store is profitable, it can be! I have a recent article which breaks that down. I even cover start-up costs and everything you need to understand to get going.

How Grocery Stores Can Still be Successful With Slim Profit Margins

So, how can they still be successful and make money? The key comes down to several factors, like volume, and being able to spread administrative and corporate expenses across multiple stores.

Larger grocery stores like Kroger or Albertson’s can have a smaller profit margin than small “mom and pop” grocery stores, a local market or a company like Whole Foods.

The reason for that is two-fold:

Whole Foods, by comparison, is not a small company really. That’s even truer since Amazon bought them. But they actually only have 500 stores currently (there were only 5 when I started with them). By comparison, Kroger has 2,800 stores.

The other key difference, and why Whole Foods profit margins tend to be a lot higher is service.

You can walk into a Whole Foods and maybe talk to a wine person who might actually be a real sommelier. Or you can talk to a butcher. You can also go to the nutrition area and get a detailed plan on how to get started on a master cleanse.

And it makes sense. How much customer service do you really need to buy Cheetos and Folgers coffee?

So smaller companies or natural and gourmet shops with a heavier focus on customer service have to operate on high profit margins to survive and to cover their increased labor costs.

What they typically sacrifice in doing that is sales volume.

Did I cover everything you were looking for regarding the profit margin for grocery stores?

In this article, we took an in-depth look into the world of grocery stores.

We examine how they price their products and how they make their money. But we also explored how a small mom and pop shop or a gourmet market or organic supermarket might have different margins than the mainstream convention grocery stores.

Ultimately we answered the question what is the profit margin for grocery stores.

[adthrive-in-post-video-player video-id=”FioubqxY” upload-date=”Thu Apr 30 2020 00:00:00 GMT+0000 (Coordinated Universal Time)” name=”What is the Profit Margin for Grocery Stores?” description=”Grocery stores are everywhere: from the small, family-owned market on the corner to the grocery store giants with locations all over the world. It’s clear that the grocery store business can be profitable and sustainable, but what is the profit margin for grocery stores? Here’s what I know after many years in the industry: Conventional grocery stores have a profit margin of about 2.2%, making them one of the least profitable industries in the US. But they make their money by selling in large volume & multiple locations. However, stores in natural, organic, and gourmet niches tend to see bottom-line profit margins of closer to 5-10%. But there’s a lot more to know about grocery store pricing and profit margins. So in this article, we’ll explore margins and markups. But also, how a company like Safeway or Kroger might have different profit margins than a Whole Foods or Trader Joes. Ultimately, we’re answering the question of what is the profit margin for grocery stores. Time to get down to business!”]

link to Is Owning a Grocery Store Profitable? (Not always Here's why)

As a store manager for years, I someday dreamed of opening my own store. But I always wondered, is owning a grocery store profitable? Here's what I discovered: Conventional grocery stores make...

Trying to figure out how much to price a product and how much profit you can make when you sell it is tricky. But after 20+ years in retail grocery, here's what I've learned about how to calculate...