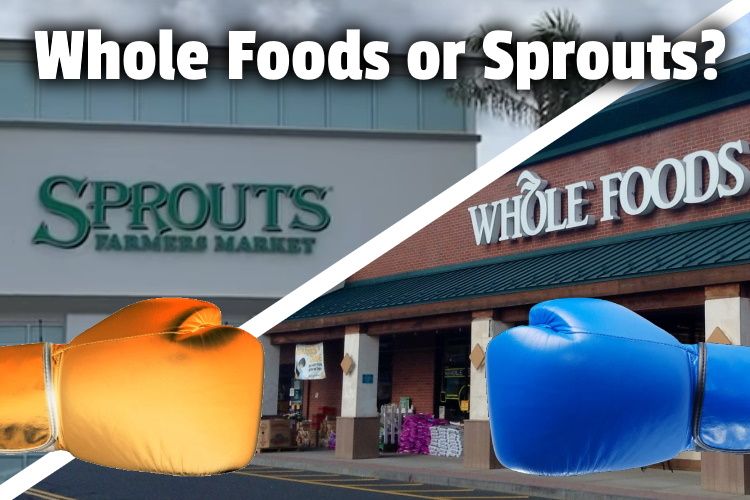 Now and then, you’ll find Sprouts Farmers Market stores being compared to Whole Foods Market. And while Whole Foods is the leader and originator of that format of store, a lot of people still try and decide: Whole Foods or Sprouts?

This is what I think, having worked at one and shopped at both:

But that’s just a quick answer.

And there are times where you might want to shop at Sprouts instead of Whole Foods. So, in this article, we’ll compare Sprouts to Whole Foods and check out which one comes out on top.

Pinch me moment! Unreal to see my work featured in a full-page spread in @MindfulOnline magazine. You can pick up the latest issue at Barnes & Noble, Sprouts, or Whole Foods! Thanks to Mindful Mag & @Shihnode for highlighting our story! #breathe #mindfulness #performance pic.twitter.com/BTHm7q78Q8

Is Sprouts Farmers Market’s quality as good as Whole Foods?

The overall quality of Sprouts Farmers Market is not as good as Whole Foods Market. Whole Foods’ products are 100% all-natural or organic, whereas Sprouts does sell some items with artificial ingredients.

And, when you shop at Whole Foods, you don’t need to squint at product labels. You know that what you’re buying is 100 percent natural and organic. It’s not the same at Sprouts. At least 10 percent of its products are not organic or natural.

What about the pricing? Whole Foods Market used to be very pricey.

Now, Whole Foods’ prices have been reduced. In fact, there’s only a small price difference between both stores.

What about the overall store quality and shopping experience?

Sprouts is a good store. Don’t get me wrong.

But, when it comes to having a great shopping experience, WFM is the way to go. Whole Foods is a company that’s a product of a “philosophical” approach to doing business.

Every facet of the store and its services are products of deep insights into how to serve customers best. That’s why it has a cult-like following.

The stores are places folks love to spend time at. Sprouts is not bad. It’s actually decent. But, Whole Foods is the undisputed leader in the sector. And, its leadership is reflected in virtually all facets of its business.

But what if you’re considering Sprouts and Trader Joe’s? Which one is better?

That’s what I explored in a recent article of mine. And just like Whole Foods, there are times you might want to hit up Sprouts instead of TJs, especially for one thing.

Is Whole Foods cheaper than Sprouts since Amazon took over?

You’re probably familiar with the “whole paycheck” moniker that Whole Foods earned in times past. The joke was that you needed a whole paycheck to shop at the store. This obviously wasn’t the case.

Of course, the store was expensive relative to most stores. It’s easy for us to mock expensive places, but once one becomes hip to the factors that make a product or service more dear, the jokes are no longer as funny.

Why is an expensive store highly popular?

Or why is a popular store expensive? Check out a recent article of mine, where I shared the reasons. One of the factors has to do with the fact that it sells higher-quality ingredients and has an alluring decor.

After the sale to Amazon, Whole Foods prices were reduced.

They had to be. After all, one of the main things people associate with Amazon is lower prices. Whole Foods prices (on average) have been reduced by about 20%.

Uhhh, no one invited you here. There are already pricey/organic/all-natural grocery stores in SLO.

Is Sprouts owned by Amazon as Whole Foods is?

Sprouts is not owned by Amazon. Sprouts Farmers Market was founded in 2002 by Stan and Shon Boney and is currently owned by individual investors, mutual fund holders, and other institutional investors.

The individual stakeholders own 14.75%, the mutual funds own 46.03%, while the remaining institutional investors own 52.16% as of the time of writing.

I can understand why people think that Sprouts and Whole Foods are owned by the same folks, seeing as it looks a lot like Whole Foods in 1992.

Amazon does not own it, and it doesn’t even have shares in it. Both had a partnership, where Amazon was handling online delivery for Sprouts, but it was terminated. Instacart does that now.

Sprouts Farmers Market was founded in Chandler, Arizona. The company has rich antecedents. Way back in 1943, the family patriarch Henry Boney founded a fresh fruit stand in California. It eventually blossomed into a few open-air farmer’s markets.

It grew into a beloved grocery store. In 1997, they renamed the family’s collection of small box farmer’s market grocery stores to Henry’s Farmers Market. And eventually, they morphed into Sprouts.

Sprouts Farmers Market sells natural and organic products, or do they?

Are all the products in the store natural and organic? Check out the facts in a recent article of mine. Among other issues I highlighted, I explained that Sprouts does actually sell products with artificial ingredients, and it’s not always the cheapest option.

Does Sprouts have an in-house bakery like Whole Foods?

Sprouts Farmers Market does have an in-house from-scratch bakery similar to what is typically available at Whole Foods Market.

They offer traditional baked goods and alternatives such as vegan and gluten-free products.

The bakery makes an array of products from high-quality ingredients that are free from colors and artificial flavors. Its bakery caters to different tastes if you have a sweet tooth. If you’re vegan. If you’re sensitive to certain ingredients, there’s an assortment of products that’ll fit your palate’s preferences.

The products are made with non-GMO ingredients.

Take the loaves, there’s a trail, from purely milled flour with no additives or enrichments to inviting loaves crafted with ultra-modern baking techniques.

The following are some of the products you can buy at the bakery:

Who has more organic items: Whole Foods or Sprouts?

Whole Foods Market has approximately 16% more organically grown items than Sprouts Farmers Market. However, the item counts will vary from location to location based on size and availability.

Whole Foods has third-party certification and internal standards to back up its claim to be “America’s Healthiest Grocery Store.”

It says about 90 percent of this is “natural or organic. But there’s a big difference between natural (which has no legal definition) and something certified organically grown.

It’s not surprising that Whole Foods is the nation’s first certified organic grocer.

A federally recognized independent third-party certification organization, Quality Assurance International, certified it 17 years ago (in 2003). A few years later, WF released a statement that each of its stores had been certified by CCOF, a USDA division.

It’s a testament to Whole Foods’ unflagging love and commitment to a niche (organic and natural) that it helped make mainstream. A journey it’s being committed to for about four decades.

It’s the pioneer in the niche.

Of course, it’s facing competition and that led to the decline that basically forced them to sell to Amazon. But yet it’s popular and almost always has been.

In a recent article of mine, I shared the key reasons. It’s the leader in the natural and organic sector, and it’s created fascinating places for folks to hang out. It made shopping fun.

Just click the link to read the article on my site.

Sprouts is a good grocery store with a rich history, but it’s still trailing behind Whole Foods in virtually every way.

In the above paragraphs, we compared both grocery stores. We looked at ownership, pricing, quality, and the number of organic products each has.

We also found out if Sprouts has an in-house bakery and what’s offered in it.

Whole Foods by Mike Mozart and a still image taken from the video First time to Sprouts | Car Vlog by 2krazyketos were licensed under CC2.0 and were cropped, edited, merged, with a text and graphic overlay added.

Continue Reading
link to Is Sprouts Better Than Whole Foods? (No. Here's why)

If you’re a Whole Foods shopper, you probably love natural, healthy foods. But you also know that they can be a bit pricey. You’ve heard about Sprouts and have heard that they may be cheaper. So...