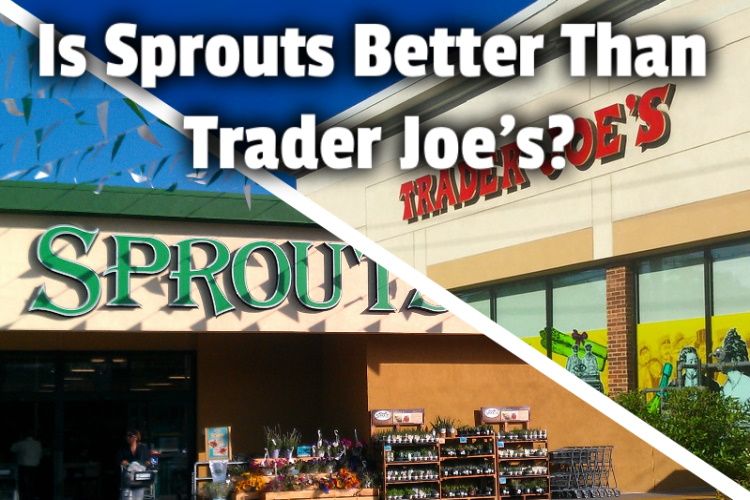 Both Sprouts Farmers Markets and Trader Joe’s are known for mostly selling all-natural foods at low prices. But is one different or cheaper than the other? More specifically, is Sprouts better than Trader Joe’s?

Here’s what I know from shopping at both extensively:

Generally, Sprouts is not better than Trader Joe’s except they do have full-service meat & seafood and bakery departments. But Trader Joe’s is usually cheaper, and unlike Sprouts does not carry products with artificial ingredients.

But that’s just a quick snapshot. And “better” is also a subjective term.

So in this article, we’re looking at both Trader Joe’s and Sprouts Farmers Markets extensively and comparing both of them. That way you get a clear picture of both and can decide which one is better for your needs.

Let’s get started with one of the most vital questions.

You won’t get as much variety as you would at Sprouts, but this is one of the reasons it’s cheaper, as has been confirmed over and over again. For example, if you want dijon mustard, at TJ’s you’re not likely to find more than 1 or 2 brands.

Sprouts prices started out being about 20% lower than Whole Foods. But as you know, Amazon bought Whole Foods a few years ago, and its prices were reduced.

In fact, right now, Sprouts prices are on the average 1.3% higher than Whole Foods! And, Whole Foods prices tend to be a tad high. (source)

This will give you an idea of why Trader Joe’s prices are still a bargain relative to Sprouts.

You won’t find most brand name products at TJ. After all, we all know there’s always a charge for the goodwill in the brand name. But, the quality of what’s on offer is high. So, it’s not as if you’re buying low-quality products at bargain prices.

One of the most authoritative sites, checkbook.org, reveals that TJ’s prices were:

In simple terms, all things being equal, it means that if you need $100 to shop at Sprouts, you’ll only need $82 at Trader Joe’s.

Great. But, how do Sprouts compare to Whole Foods?

Tons of meat and produce at Trader Joe’s too. And a full restock of frozen stuff happening now. pic.twitter.com/H8TZqpLPcB

Meat at Trader Joe’s is good quality. However, because they do not have in-house butchers, everything is cut and pre-packed elsewhere, making the offerings limited and making custom cuts of meat impossible.

In a report quoted by CNBC, it’s the highest-ranking grocery store chain in the country. It has a great selection at highly affordable prices.

Now, there’s nothing wrong with prepackaged meat, if that’s what you want.

But, sometimes, low-quality meat gets prepackaged or marinated to hide the inferior quality! And the highest-quality meat you’ll get at TJ is sometimes too pricey.

So, I’ll suggest you buy your meat elsewhere, aside from basics such as chicken breast or ground beef. But, where, you ask?

But which grocery store has the best quality meat?

I took the time to research and write-up my findings in a recent article of mine. In it, not only did I answer that question, but I also covered if prime is worth the money, and how to pick steak at a grocery store.

Beginning tomorrow, April 29, our stores will be open 7am-10pm to ensure you can get the good-for-you groceries you need. pic.twitter.com/NHVonS4LDn

Does Sprouts have a better selection than Trader Joe’s?

Yes, Sprouts does have a better overall selection than Trader Joe’s. They are generally a much larger store, with more products, in-house butchers and bakers, and have produce that is not pre-packaged.

The following are the main sections at Sprouts aside from the grocery aisles:

Sprouts sell over 11,000 items. It has more of a grocery store ambiance than Trader Joe’s.

In fact, a huge chunk of TJ’s selection is its own private label products. Customer service at TJ’s is minimal to keep the prices low, and there are no full-service sections.

If you’re seeking low prices, Trader Joe’s is better, but if you want a place where you’ll get virtually everything you need under one roof, go for Sprouts Farmers Market.

Great. But how does Trader Joe’s compare with Shoprite?

That’s what I explored in a recent article of mine. In the article, I looked at Trader Joe’s and Shoprite’s’ prices, who have more organic produce, and who has the best meat (the answer to which blew my mind!).

Is the produce at Sprouts better than Trader Joe’s?

Produce sold at Trader Joe’s is of lower quality than Sprouts. It is not as fresh and tends to spoil faster. More importantly, though, Trader Joe’s produce is all prepackaged meaning they don’t sell anything that has to be weighed, nor do they sell just 1 of an item such as avocados.

TJ’s avoids individual produce as that generally has to be weighed. That incurs costs of scales at the cash registers and in the produce department. It also means training the cashiers on produce codes, all of which increases the cost.

So they avoid all that to keep prices low.

But, truth be told, the produce at Sprouts is better, fresher, and you’ll get a lot more variety. At TJ’s, items such as broccoli, greens, and peppers are often old.

On the whole, Trader Joe’s products are good and inexpensive, but if I were you, I’d pass on the produce.

The above is not just my opinion, it is something you can validate yourself, and it’s been reported in many blogs, websites, and even by some of the staff who work there.

And the produce at TJ’s is not exactly cheap since you generally are having to buy larger quantities of items than you might normally. If I do buy produce at TJ’s, it would be things like limes, lemons, or avocados, and I check the packages thoroughly to make sure none are already moldy.

So, why would you want to pay more for low quality? On the other hand, the produce at Sprouts is fresh, there’s a great selection, and they’re affordable to boot.

Having a Sprouts Farmers Market close by makes it so convenient to shop fresh produce! 🍅🍆🍏📷: @fitness_felines #Sprouts #Highlands32 #Denver pic.twitter.com/Hfho1nvfgk

Is Sprouts a good store?

Sprouts Farmers Market is a mediocre grocery store that intentionally creates its decor to imply that they are a natural foods store similar to Whole Foods Market. However, unlike Whole Foods, Sprouts does sell some items with artificial ingredients.

As reflected in its name, its aspiration is to be “more of a farmers market than a grocer.”

It was conceived as a way to make healthy food accessible to all, even those from low-income groups. We know that natural, organic food is often expensive because it’s more tasking and costly to use purely natural strategies to grow crops and rear animals.

In theory, the company wants people to eat healthy even if they’re not wealthy.

But in truth, I suspect they pick their locations not so much because they want to cater to lower-income families, and more because the rent will be cheaper.

And with as much as 10% of its products not being all-natural despite their stores being made to look like a Whole Foods circa 1992, it feels a little misleading to me.

But I do think Sprouts have their place.

They do have locations in areas where Whole Foods Market is not likely to build stores, making it more convenient for many. And as long as you go in with the understanding that not everything is cheaper or all-natural, you can still find decent quality products at good prices.

In this article, I compared Sprouts Farmers Market with Trader Joe’s.

I looked at which one has lower prices, which one has good quality produce. I also looked at the selection. Can you get everything you want to buy at Trader Joe’s? Unfortunately, no.

I also looked at what kind of store Sprouts really is. Ultimately, if both stores were side by side in my neighborhood, I would probably find myself shopping at both.

But I would probably be in Trader Joe’s more often.