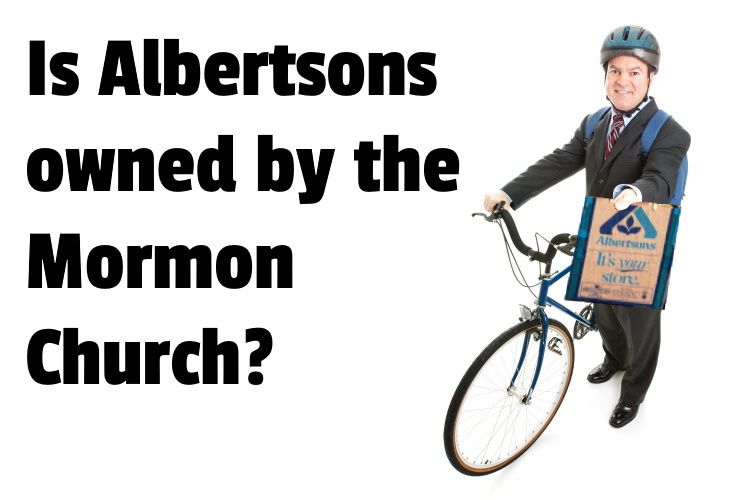 Knowing who owns a grocery store sometimes affects our choices of whether to shop there or not. Albertsons is one of the famous options for grocery shopping, and you might be wondering, is Albertsons owned by the Mormon church?

Albertsons is not owned by the Mormon Church. The Church of Jesus Christ of Latter-day Saints does not own any grocery store and is not listed among the top shareholders of the company. Albertsons is owned by the private equity firm Cerberus Capital Management.

Churches cannot directly own companies, seeing as they are not-for-profit organizations.

Albertsons is one of the nation’s biggest grocery stores, with annual revenue of $60.5 billion. It’s actually the second-largest supermarket chain in the country. And it’s also worth pointing out that founder Joe Albertson was also not a Mormon.

But how did that rumor start and is there a history connecting Albertsons to the Mormon church? We’ll get into all that and more!

Great job @Albertsons – figured it out! Employees all masked, sanitizing between customers, distancing in line, aisles have one-way traffic, single entry point with maximum number of shoppers, no open salad bars or other exposed food. Thanks for keeping us safe. #InThisTogether pic.twitter.com/qb0ehMcWwA

Who is Albertsons owned by?

Albertsons is owned by Cerberus Capital Management. And being a publically-traded company, it also has stock owned by a variety of individuals and companies.

Other members of the consortium include Klaff Realty LP, Lubert-Adler LP, Kimco Realty Corp., and Schottenstein Stores. Apollo Management is another significant stock-holder.

So, it’s owned by the public, Cerberus, and Apollo.

In June 2020, amid the pandemic, it had its IPO. It was an attempt by Cerberus Capital Management to cash out. Albertsons had planned to have its IPO way back in 2015, but it was only able to realize it in 2020.

It wasn’t a particularly impressive outing. Maybe the uncertainty occasioned by the lockdown affected it. Its attempt to have an IPO in 2015 failed, but it did acquire Safeway. That’s highly impressive.

After the IPO, Cerberus Capital Management still owns a 31.9% stake in the company. Apollo Management, a buyout firm, owns a 17.5% stake, which it acquired for $1.75 billion, for the company’s convertible preferred stock.

I’m in Texas. So we didn’t have those. Did you have Albertsons? pic.twitter.com/eCawVsy7Rj

What other companies does Cerberus Capital Management own?

The following are some other companies Cerberus Capital Management owns aside from Albertsons and Safeway:

At a point, it bought and owned Chrysler. Currently, it has about $45 billion in its funds and accounts. It’s also present in Europe and Asia.

Dan Quayle, a former vice president of the U.S., is on its board and is the chairperson of its global investments division.

John W. Snow, Former secretary of the Treasury, is also on its board. He is the chairperson of Cerberus Capital Management. Steve Feinberg and William Richter founded the company in 1992.

Let’s look at what the company does, and after that, we’ll check out some of its investments, apart from Albertsons.

Cerberus Capital Management is a global leader in alternative investing. The following are its services:

Cerberus Capital Management was founded by Steve Feinberg (who is Jewish) and William Richter. Neither is Mormon.

So, there’s nothing that remotely suggests that the company could be connected to the Church.

Cerberus Capital Management is a private equity firm with investments in a wide range of sectors, and it has a global footprint. Its investments, as far as one can tell, have no subtle or overt overarching religious undertone.

So why does the rumor persist about The Church of Jesus Christ of Latter-day Saints (the official name of the Mormon church) owning Albertsons and Safeway?

In truth, it’s a little unclear.

But founder Joe Albertson did indeed grow up in Idaho, which is 2nd only to Utah in terms of a large Mormon population. Additional, there was a friendship and connection between Alberston and Safeway as originally Albertson was an employee of Safeway.

At Safeway, he met Samuel Olnie Skaggs and formed a partnership that resulted in the 1st Albertson’s store.

Samuel, also known as L.S. was the brother of Safeway founder Marion Barton Skaggs (known as M.B.) and while they were raised Baptist, their brother Levi did marry a Mormon. But that’s about the extent of the connection between both companies and Mormons.

Some grocery stores are usually found only in certain parts of the country.

Why is this the case? Is there a store that’s present in all the states? Why are some grocery stores regional?

I shared the reasons in a recent article of mine. One of the stores I profiled is HEB, which has a near cult-like status in Texas? Why is it only in Texas? Find out why, and a lot more in the article.

Just click the link to read it on my site

Does the Mormon Church own Safeway?

Safeway is not owned by the Mormon Church. Safeway was purchased by Albertsons in 2014 which had been purchased by Cerberus Capital Management in 2006. Safeway founder Marion Barton Skaggs was raised Baptist.

The Mormon Church’s investments are in the media, financial, real estate, and agriculture sectors. The Church does not own any grocery store. And, churches cannot own companies directly.

But, it’s possible for churches to have holding and management companies through which they can do business, and they’d be required to pay taxes on such investments.

Safeway or part ownership of it is not listed as part of the investments owned by the church.

Safeway is a product of a merger between two grocery stores: Skaggs and Seelig. Skaggs was founded by a Baptist minister, while Seelig was founded by the son of Russian Jewish immigrants who lived in California.

Most Saints (members of the Mormon Church) live in Utah. There’s also no record that either later converted to Mormonism.

Have you ever been curious about the terms grocery store and supermarket?

Can they be used interchangeably? This is what I explored in some depth in a recent article of mine. Where I showed the essential difference and other differentiators. Take Whole Foods, is it a grocery store or a supermarket? I shared what it is and a lot more in the article.

What other businesses do the Mormon Church own?

This is not because the church is secretive about its holdings, but its holdings are dynamic — it invests and divests from a lot of businesses. So, what I share here reflects the position of its holdings at the time of writing.

Fortunately, as I said, we know for sure that Deseret Management Corporation manages its for-profit holdings.

The church formed Deseret in 1966, and its annual revenue is $734. Its investments span the financial, media, agriculture, and media sectors.

The following are its subsidiaries.

In the preceding sections of the article, we looked at some interesting info about Albertsons, Safeway, Cerberus Capital Management, and the Mormon church.

We saw that Safeway and Albertsons are not owned by the church. We checked out Cerberus Capital Management, one of the global leaders in the area of private equity investing.

It has no connection to the church. Lastly, we looked at the investments that are owned by the Mormon church through the holding and management company it has set up.

Grocery bag and cat by Quinn Dombrowski is licensed under CC2.0 and was cropped, rotated, and inserted into another picture.