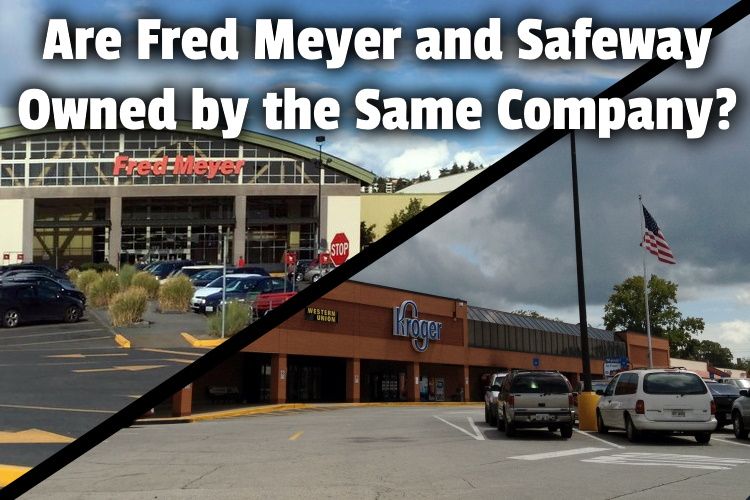 So Albertsons bought Safeway, and the person appointed to be the new CEO was the former CEO of Fred Meyer.  This led many people to ask: are Fred Meyer and Safeway owned by the same company?

Here’s what I uncovered:

Fred Meyer and Safeway are not owned by the same company. Kroger owns Fred Meyer, while Safeway is owned by private equity firm Cerberus Capital Management who also owns Albertson’s and a variety of businesses in different industries.

Did you know that Safeway is the first retail food store to sell more than $10 billion worth of products? In this article, I’ll share more interesting facts about both Safeway and Fred Meyer.

Prior to becoming a consultant, I worked for twenty years as a general manager at Whole Foods. So, you could say I know a thing or two about the grocery industry.

Oh, one more building in Middleburg! Outside of gas stations, this Safeway is the *only chain store* along Route 50 until Winchester. The second photo is the back of it – no back parking lot, truck bay, fenced-off dumpster area. A human-scaled big-box store. pic.twitter.com/GynO2uxiPL

What other stores are affiliated with Safeway?

Some of the stores that are affiliated with Safeway include: Randalls, Tom Thumb, Carrs Safeway, Vons, and Pavilions, plus Safeway’s 49% share of Casa Ley, a Mexican grocery chain.

Safeway is indeed one of the giants in the grocery industry. In fact, it’s the third-largest grocery store in the nation.

Walmart and Kroger are the first and second, respectively. Safeway was founded in 1914 by Sam Seelig. It grew at an impressive rate, so much that 14 years after it began, it was listed on the New York stock exchange.

I’ll tell you a bit about two of the stores: Randalls and Tom Thumb.

Randalls used to have several locations in different parts of Texas. It was founded in 1966 and basically a family operation.

But it’s worth pointing out that they avoided selling alcohol for almost 3 decades.

Safeway bought the chain in 1999 and at the time, they had 116 stores. However, Randall’s has been closing down a considerable number of its stores in recent years as they struggle to keep its market share.

Today, they only operate 32 locations.

Tom Thumb was founded in 1948. It grew pretty fast. In fact, eight years after it was founded, it had already grown to 20 stores. Today, there are 64 stores.

It has two “divisions”: its regular Tom Thumb and Flagship Tom Thumb, which is a more gourmet version of their stores.

While they did sell 6 of their stores to Albertsons in the 80s, the bulk of the company was sold to Randall’s prior to Randall’s being bought by Safeway.

Then, of course, as I covered above, both companies were sold to Safeway in 1999.

Who is Fred Meyer owned by?

Kroger purchased Fred Meyer in 1998. The company was started by Fred G. Meyer in 1931. Meyer passed away in 1978, and the chain was sold to private equity firm Kohlberg Kravis Roberts in 1981. That company owned Fred Meyer until purchased by Kroger.

It was projected that the combination of both Kroger and Fred Meyer would produce a supermarket giant with $43 billion in annual revenue!

I’ll let you know about the acquisition in a bit.

But, before I do, I thought I should let you know that Kroger is the biggest grocery store in the world, and I’ll also tell you a bit about Fred Meyer. Kroger has an annual revenue of $121 billion. So, it’s really huge!

It was founded by Barney Kroger in Cincinnati in 1883.

Now, it has 2800 stores in 35 states. An innovative store, it was the first to have its own bakery and the first to sell meat. 26% of its products are manufactured at its own plants, where products such as milk, soda pop, and peanut butter are made.

But, at the time of the acquisition, both stores could be described as rivals.

Kroger paid $12.8 billion for the purchase, representing $8 billion in stock and $4.8 billion in the assumption of Fred Meyer’s debt. The deal made Kroger the largest supermarket chain in the nation.

The deal enabled Fred Meyer’s shareholders to own one Kroger stock for each one they previously owned in Fred Meyer.

One of the things Fred Meyer pioneered was one-stop shopping, which helped a lot in accelerating its growth.

Customers could now buy virtually everything they wanted under one roof. Today, with Walmart everywhere, we take it for granted. But at the time, it was one hell of a move.

@Safeway Fair Oaks, Ca has the most beautiful store! Check out the huge rooster outside! Children’s health ed is fun! pic.twitter.com/2gy7jjpCoi

Are Safeway and Kroger owned by the same company?

Safeway and Kroger are owned by different companies. Safeway is currently owned by Cerberus Capital Management, while Kroger is an independent company.

Safeway was founded by Marion Barton Skaggs, a Mormon, in 1915. It was acquired by Cerberus Management (Albertsons’s parent company) a hundred years later in 2015.

Other Safeway stores that are a part of the acquisition include:

Let’s learn a bit about Safeway’s owner: Cerberus Capital Management, a company founded in 1992. It’s a global leader in alternative investing with assets worth $45 billion.

The following are some of the areas that they operate other businesses in:

Does Cerberus own Kroger?

No! Kroger was founded by and owned by Barney Kroger. Today, it’s an independently owned public company and the world’s largest supermarket in terms of revenue.

And the second-largest retailer. Walmart is the first.

Is Safeway or Fred Meyer owned by the Mormon Church?

In the preceding section, I shared some key details about Cerberus Capital Management. It’s not owned by the Mormon church, but by Steve Feinberg and William Richter, neither of whom are Mormons.

And it’s worth pointing out that most of Safeway’s founders, the Skagg’s family, were raised Baptist.

But one of the Skagg’s brothers, Levi, did marry a Mormon. But that’s not the same as being owned by the Mormon church.

Before I wrap up this section, have you ever wondered if the terms grocery store and supermarket can be used interchangeably?

This is what I explored in some depth in a recent article of mine.

Here, I showed their essential differences and other differentiators. Take Whole Foods, is it a grocery store or a supermarket? What really surprised me is that there actually is a difference between the 2 terms!

When were Safeway and Fred Meyer stores sold?

Fred Meyer was sold to Kroger in 1998, while Safeway was sold to Cerberus Capital Management in January 2015. However, Safeway began selling certain divisions of its company in 1982.

According to the Wall Street Journal, when Fred Meyer was sold, it was at a 25% premium over its valuation. The new valuation came to which came to $8 billion, and the assumption of $4.8 billion of its debt by Kroger.

Safeway, a grocery store that was dominant in the Bay Area, was bought for $9.4 billion and was merged with Albertsons.

One of the reasons for the mergers and acquisitions in the industry is to enable the new store to have a greater reach.

But other times private equity firms basically buy up failing stores that are on the verge of going bankrupt. Then they often cut expenses, get them back to profitability, and in some cases, sell them again for a much larger sum.

But other times stores get sold when a chain that operates elsewhere in the country wants to expand into another area.

So why are some grocery chains region-specific?

I shared the reasons in a recent article of mine. One of the stores I profiled is HEB, which has a near cult-like status in Texas? Why is it only in Texas? Find out why, and a lot more in the article.

In the preceding paragraphs, I share some interesting facts about Fred Meyer and Safeway.

I also revealed that the purchase of Fred Meyer made Kroger (America’s grocery) the largest grocery chain in the country.

Photos that require attribution under CC2.0

Fred Meyer, panoramically by Northwest Retail and Kroger Griffin, GA by Mike Kalasnik have been cropped, edited, and merged.