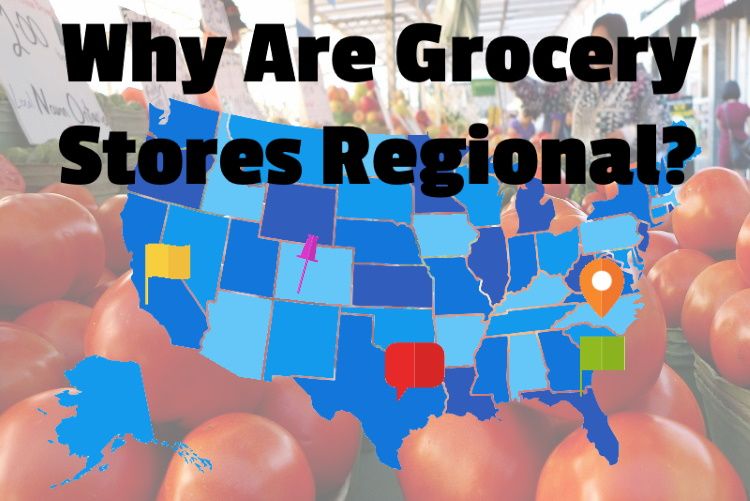 If you’ve done any amount of traveling, you’ve probably noticed that you may not see the same grocery stores in other cities as you do at home. Knowing this made me wonder – why are grocery stores regional?

I decided to do some research, and this is what I found out:

Why Are Grocery Stores Regional? Competition, complicated multi-state legalities, and the infrastructure to properly supply stores tend to limit growth. For example, Publix is only in the south. Kroger is only in certain cities & states. HEB is only in Texas & Safeway, while once nationwide, is mostly west coast now.

But there is a lot more to know about whether grocery stores are regional. I’ll dig into more details on various regional and nationwide stores, and where they are located.

In the early days of the pandemic, when grocery stores in the United States ran low on staples like toilet paper, people flocked to Walmart and Target to stock up. From The New York Times: https://t.co/7cJ0xrt7uq pic.twitter.com/clMIFWQjQJ

What are the top 10 grocery stores in the United States?

They offer great value, have the best products, and strive to be essential to their communities. Yet, finding a store with all three can be challenging at best.

The ones that made the grade, and can be considered the best are listed below as per Food and Wine, in no particular order. Check if yours makes the cut.

Those picks were based on a wide variety of areas.

But if you want to know what grocery stores have the best steaks, you should definitely read this recent article. Just click on the link to view it on my website.

You might be surprised to find that Whole Foods Market is one of the best places to buy steak. Not only are their steaks delicious, but they have over a hundred animal welfare standards, ensuring that all meat sold in its stores is humanely raised and slaughtered.

Just click the link to read it on my site!

@HEB thanks to the associates at Champion Forest 725! The store was packed this morning and everyone was smiling and checkout lines were ultra efficient! WTG! #helpingthecommunity #houstonstrong pic.twitter.com/bnHvyRPNXs

Why is HEB only in Texas?

H-E-B started more than 100 years ago as a small, family-owned store in Kerrville, Texas.

Today, they have more than 340 stores and over 100,000 employees. In fact, they are one of the largest food chains in the US, And even so, they only have stores in Texas and Mexico.

And HEB shoppers LOVE HEB. They love it so much, people have had maternity photos and engagement photos taken at the store.

HEB also goes out of its way to support Texas charities, like local food banks and the Special Olympics. They also promote Texas-made products in their stores.

HEB is still a family-owned business.

Now HEB easily has the resources, infrastructure, and ability to go nationwide. But at the end of the day, that’s more work than just operating in Texas. And after all, HEB loves Texas, and Texas loves HEB.

If you are not fortunate enough to live in Texas, you may be wondering where to go to purchase the best chicken.

Just head over to this recent article to read about what stores have the best chicken.

For ingredient and additive quality standards, and animal welfare policies, no grocery chain beats Whole Foods market. No antibiotics are ever administered in the life of the chicken.

Just click the link to read more on my site.

This morning, our @HEB Partners will serve breakfast and provide water and ice to our neighbors in Orange, TX. until 10am. Dinner service this evening will be from 4-7pm. #texanshelpingtexans #hebhelpinghere https://t.co/7sNeWqpLoy pic.twitter.com/v7Oe5mkalg

Is there any grocery chain in all 50 states?

No is the short answer.

There are almost 40,000 grocery stores in the United States. Many of these grocery stores are regional, some services just a single state, like HEB in Texas.

But there are others that operate nationwide.

The largest grocery chain, by far, is Walmart, although you could make the argument that they are a department store that also happens to sell food. But as large as Walmart is, they do not operate in Hawaii, so they are only in 49 of the 50 states.

Kroger Company is the second-largest grocery chain. Kroger Company operates not just Kroger, but other grocery store brands like Fred Meyer, Harris Teeter, and Ralphs. But it’s interesting that Kroger isn’t in most cities.

For example, Kroger was all over Dallas when I lived there but they have no stores in Austin, just 200 miles away.

But stores like Walmart and Target are really considered supermarkets rather than grocery stores. While the terms are often used interchangeably, grocery stores are much smaller and more specialized than supermarkets.

Supermarkets are larger in scale and carry a much wider selection of items. They have many more departments than a grocery store. Typically they will have an in-house butcher, floral department, or even a pharmacy.

Grocery stores can also be a lot more personal than supermarkets. Whole Foods is a supermarket but has a grocery store feel. They sell mostly natural, organic foods in a pleasant environment.

To read more about the differences between grocery stores and supermarkets, just read this recent article.

it really just takes $6 to make your girl happy with a whole DOZEN of roses @ kroger!! 💕💞💓💗💖 pic.twitter.com/ZduTfgtnF0

What states are Krogers in?

With more than 3,500 stores nationwide, Kroger Company is the second-largest retailer after Walmart. Headquartered in Cincinnati, Kroger stores are predominant in the Midwestern and Southern United States.

You would think with this many stores, that they’d be in every state, but as it turns out, they are only in 35 states. The majority of their stores are in California.

If you want to see if there is a Kroger in your state, head over to the Kroger Company Website.

But here’s a quick glance at those 35 states:

OMG they have Bill Knapp’s dunkers at Safeway in California- it’s the pride of Michigan! Chocolate and nutty are coming with me! w/@iocat and @jeremymika pic.twitter.com/dQzZ2U7dW2

Is Safeway only in California?

Safeway was founded in American Falls, Idaho, by Marion Barton Skaggs. It was purchased by Albertsons in 2015.

They also expanded internationally, opening stores in Canada, the United Kingdom, and Australia, among others.

In the 1980s, Safeway began selling off stores.

I recall shopping in them in Austin when I was a kid. Then the store changed names to Budget (I think). Budget gave the impression of being employee-owned. That didn’t last long and at least in my town, the stores were sold to Randall’s out of Houston.

Ironically Randall’s was bought back by Safeway in 1999.

By 1989, their presence was reduced to several western states and Northern California, plus the Washington, DC area.

In 2015, Albertsons purchased Safeway. Since that time, a few stores in Florida, Denver, and Seattle have been rebranded as Safeway. But all grocery chain names combined, Albertson’s operates in 34 states plus Washington DC.

So, while there are a few Safeway stores outside of California, most of them are in California.

But since Albertson’s bought Safeway in 2015, their labels have grown to include all of the following grocery store brand names: (source)

What’s cooking at your house? If you need food but don’t want to risk the exposure going out to the stores check out @Instacart I got a delivery from @Publix through them yesterday. Easy Peasy!
It’s the perfect time to grill my Dry Rub Wings -> https://t.co/4K0BO0LbJv#foodie pic.twitter.com/V9VwqRo1r1

How many Publix stores are there in the US?

They are one of the largest US regional grocery chains and have more than 1,200 stores. They have their own manufacturing facilities where they produce their dairy, deli, bakery, and other private label food products.

Publix is the largest employee-owned company in the US. Headquartered in Lakeland, Florida, Publix operates throughout the Southeastern United States.

Publix has been on Fortune magazine’s list of 100 Best Companies to Work for on multiple occasions. In fact, they are one of only eight companies that have been on the list since its inception in 1998.

The first Publix to open outside of Florida was in Savannah, Georgia, in 1991. Since then, they have expanded to South Carolina, Alabama, Tennessee, North Carolina, and Virginia.

Did I answer everything you wanted to know about why grocery stores are regional?

With 40,000 grocery chains across the United States, it’s not surprising only a few of them are nationwide.

Great grocery stores, like HEB in Texas, are loved by fans and want you to hang out for a while. Impersonal supermarkets like Walmart and Target have stores in just about every state.

Safeway used to be nationwide, but are now primarily on the West Coast, while Publix is regional to the southeast.

What is your favorite grocery store?

The sight and aroma of a freshly grilled steak can automatically activate one’s taste buds. But now and then, you happen on a tough one that’s chewy and not very appetizing. It makes you wonder...