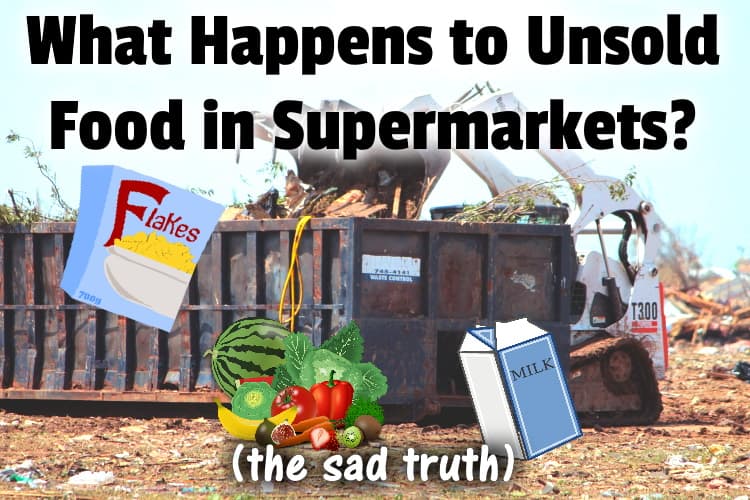 Having worked in grocery stores for more than 20 years, I know the answer, but many shoppers wonder what happens to unsold food in supermarkets??

Every year, more than 43 billion pounds of food from grocery stores gets thrown away. Much of the food is still technically edible, but most large grocery chains severely limit what food gets donated once it’s no longer able to sell it. The reason is out of fear of litigation due to poor or vague laws and regulations.

But there’s a lot more to say about grocery stores and how much expired or damaged food gets thrown away.

So in this article, we’ll get into what the laws say and how much food actually gets donated, tossed or composted. But we’ll also answer whether or not food banks and shelters will even take expired or damaged food items.

How much do grocery stores throw away?

Grocery stores throw out 43 billion pounds of food each year. This includes wilted, moldy produce, spoiled meat & seafood, dented and damaged canned and boxed goods, as well as baked goods that are stale or moldy.

Beyond that, the Center for Biological Diversity recently conducted a survey where they looked at specific grocery chains and how well they fared in terms of food donation.

They looked at the following criteria:

Then after examining each grocery by those standards, they came up with a report card grade. Check out that here: 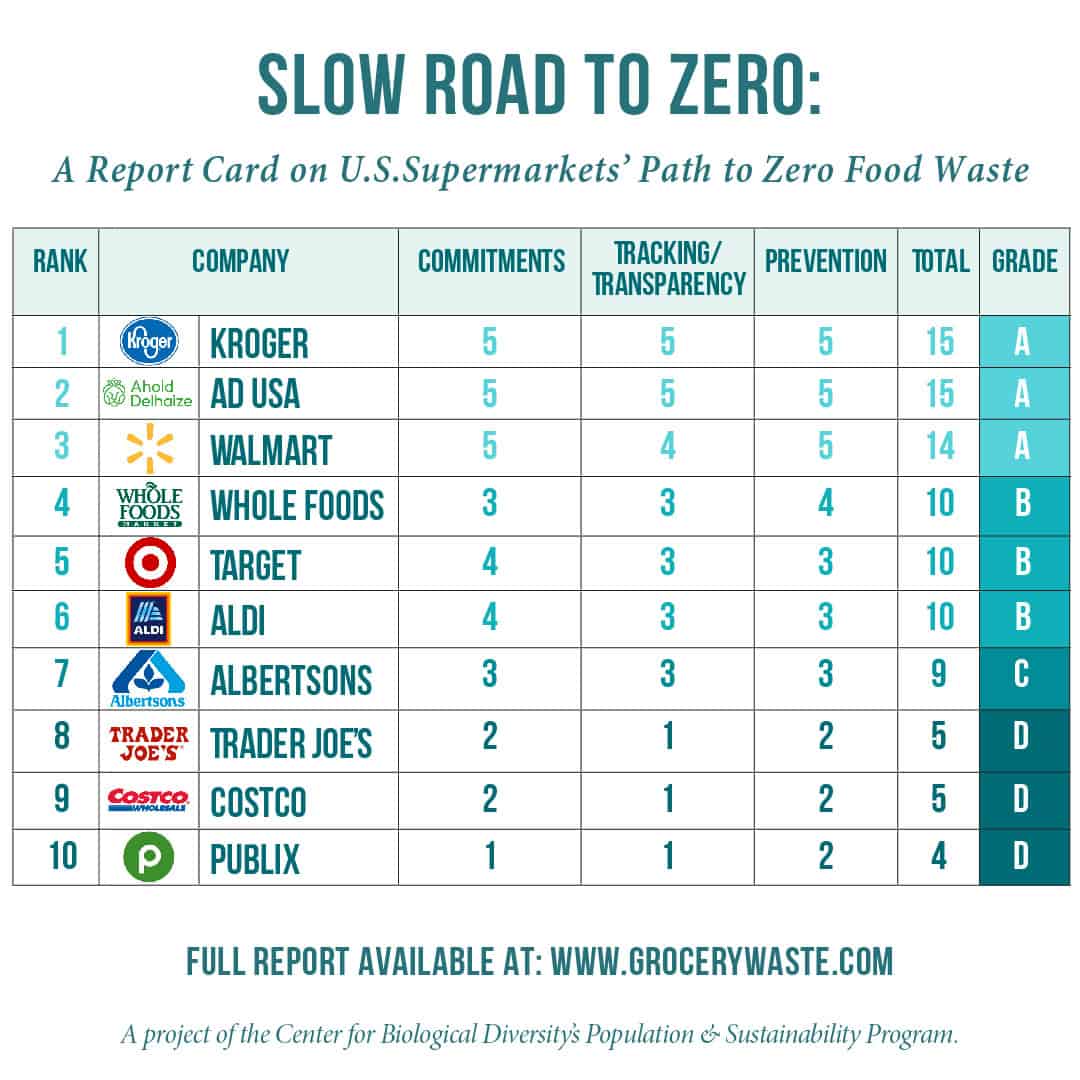 Do supermarkets throw away food?

Yes; grocery stores throw-away billions of pounds of food each and every year. While some of it could be given to food banks, food safety laws actually prevent much of it from being donated.

In the 20+ years I worked for Whole Foods Market, many spent in middle or upper management positions, I can tell you that the majority of expired food and damaged packaged goods do indeed get thrown away.

Now, I don’t say that to make anyone mad or make it seem like the grocery industry is hiding a secret.

And I also don’t want you to think that all grocery stores are the same and that nothing gets donated. There’s actually quite a bit of food that gets donated.

But there’s a lot that just ends up in the landfill.

A recent report by Harvard Law School looked at the laws on the books in all 50 states as far as food safety regulations regarding food donation.

Their report concluded that:

In short, in terms of legislators encouraging, supporting, and protecting retailers in donating more of what’s currently being thrown away, we have a long way to go.

Can grocery stores give away expired food?

The short answer, especially if you mean legally, is yes. Grocery stores can legally donate food that is past its expiration date according to the USDA.

To be specific, they say:

“Yes. The quality of perishable products may deteriorate after the date passes but the products should still be wholesome if not exhibiting signs of spoilage. Food banks, other charitable organizations, and consumers should evaluate the quality of the product prior to its distribution and consumption to determine whether there are noticeable changes in wholesomeness”

That being said, in our litigious society, many large corporations are hesitant to donate some items that could be deemed questionable in terms of food safety out of fear of getting sued.

So while it’s sad in a way that some grocery stores don’t donate all they could out simply due to fear of being sued by a food bank or charity,

That being said, there is some legal protection for those who donate under the Bill Emerson Good Samaritan Food Donation Act. That act was put into law to encourage the donation of “food and grocery products to nonprofit organizations for distribution to needy individuals”.

The problem with the law, and why it didn’t cause as much donated food as they hoped is that it also states “This immunity does not apply to an injury to or death of an ultimate user or recipient of the food or grocery product that results from an act or omission of the donor constituting gross negligence or intentional misconduct.”

Since a large national grocery chain can’t control the process in each of their hundreds of stores, many would rather simply avoid any possible claims of negligence or misconduct.

After all, they are risking millions of dollars and putting that risk in the hands of employees likely making between $10-$15 per hour. Many companies simply would rather risk criticism over their policy than spend millions on lawsuits.

Yes, is the short answer.

At all of the 10 different Whole Foods stores I worked at over the years which ranged from east to west coasts, we donated the following:

We did not, however, donate deli foods from the hot or cold salad bars, much of which got tossed on a nightly basis. Also, it’s worth noting that many Whole Foods stores (and probably others too) do a good job of repurposing food that is still good (and not expired) but isn’t up to display standards.

By that I mean, bruised apples might be transferred from the Produce department to the Juice Bar. Or a bag of rolled oats with a torn label might be cut open and put into the bulk bins.

We also know from the above report card, that the most donation-conscientious retail grocery chains (of the ones surveyed) are:

And the flip side, we see that the worst-performing grocery chains (again of the ones surveyed) include:

The real irony here is that Trader Joes and Aldi are owned by the same family (different parts of that family though).

Of course, there are countless other grocery chains and local stores that likely weren’t part of that survey. So when in doubt, ask your local grocery what their food donation policies and programs include.

Of course, every shelter or food bank across the globe may have different policies.

That being said, many only take shelf-stable non-refrigerated canned, boxed, or bottled items as a safeguard against food-borne illness.

Feeding America is a nationwide network of over 200 food banks. Chances are the one in your town is affiliated with them. But even their site says to check with your local branch to see if they will take donations of perishable (fresh, refrigerated, or frozen items).

And surprise, surprise, all the local branches I checked either didn’t take those things or were vague about it.

We’ve spoken about how much food is wasted in the world on our social media before – we applaud Italy for passing a bill that means that unsold food from restaurants and grocery stores go to charities rather than dumpsters! Click the link to learn more!https://t.co/Pp0DXtv1zD pic.twitter.com/6CPfyDhPNY

Yes. Most homeless shelters and food banks will accept expired food products. But most prefer to only take non-perishable items packaged in cans, boxes, or bottles.

Of course, every shelter or food bank across the globe may have different policies.

That being said, many only take shelf-stable non-refrigerated canned, boxed, or bottled items as a safeguard against food-borne illness.

Feeding America is a nationwide network of over 200 food banks. Chances are the one in your town is affiliated with them. But even their site says to check with your local branch to see if they will take donations of perishable (fresh, refrigerated, or frozen items).

And surprise, surprise, all the local branches I checked either didn’t take those things or were vague about it.

Bravo! “Montreal wants to bar grocery stores from throwing food in trash. It will encourage grocery stores, hospitals & educational institutions to create partnerships with food banks & other community organizations to give unsold food to those in need.” https://t.co/C1lHH4g2q2 pic.twitter.com/pgKYKreWLe

Why do grocery stores order more food than they can sell?

Grocery stores do not over-order with the intent of throwing away products. With profit margins as low as 2%, they can’t afford to do that. Instead, they try and balance having their shelves full and abundant while meeting and not exceeding set shrink targets that are often about 3% of the total.

But the reason here might surprise you unless you work retail.

In short, displays of food items sell much better when they look full. Now sometimes good merchandisers use dummy risers and other things to give the appearance of fullness without over-committing to too much product.

But ultimately, if stores only had on display what they would actually sell, their sales would go down as many stores would look like a coastal store after a hurricane warning was announced. In other words, the shelves and displays might look kind of barren and empty.

Psychologically we, as consumers, tend to respond poorly to that.

Think back to when you were at a store and saw that they were almost sold out of an item and you mostly saw a big empty shelf.  Did you buy that last one?  If you’re like most people, unless you were desperate for that 1 thing specifically, you probably didn’t.

So grocery stores, within reason, order to make the store look full and abundant.

Then they balance that with not tying up too much cash in inventory that might sit there for months or spoil. There’s a fine art to merchandising a grocery store.

So if you want to learn even more about the mentality of grocers, and why they are constantly moving the aisles around, check out a recent article where I break it all down.

Did I cover everything you wanted to know about how much food grocery stores throw away?

In this article, we took an in-depth look into the world of grocery stores and what they do with out of date or damaged food items.

We explored the truth about how much gets thrown away compared to donations or composting.

Ultimately, we answered the question of how much do grocery stores throw away. Running a successful grocery store requires wearing a lot of hats. After all, you are balancing customer service, merchandising, employee relations, and trying to stay profitable so you can pay everyone.

Learn more about grocery store profit margins, including why some grocery stores only earn 2% while others make 10% or more, in a recent article, where I explain it all.

link to Types of Wine Chart (Sweetness, Body, and Flavor)

Drinking a glass of wine is one of life’s most refreshing pleasures. But picking up the right bottle of wine can be daunting. So here’s an easy-to-understand types of wine chart. And we’ll...

Continue Reading
link to How Can You Tell if a Steak is Bad or Spoiled?

There’s nothing like a great steak perfectly cooked. But sometimes we buy meat 1 or more days ahead of time. And occasionally, it may look darker or have an off smell when we go to cook it. So, how...