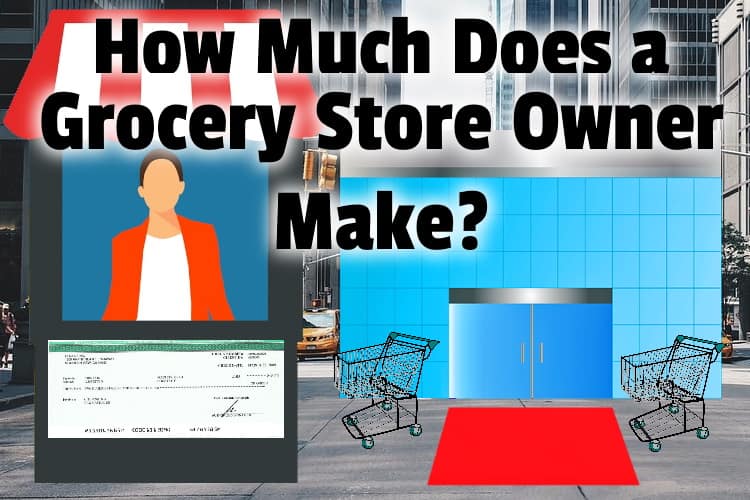 Grocery store owners make anywhere from $60,000 up to around $300,000 or more. Location, size of store & whether it’s a franchise affect the pay range the most. While grocery store owners on the top end, do earn more than a grocery store manager for a company, that is not the case on the low end of the range.

But there’s a lot more to get into about grocery store owners and their salaries.

Lastly, we’ll see how much you could earn as a grocery store owner compared to owning other types of retail stores. Let’s get going!

More of this, please.👍🏻 pic.twitter.com/rLnsh48dpv

What is the typical grocery store owner’s salary?

A grocery store owner literally owns their business, or are at least franchising it from someone like Grocery Outlet.

So right out of the gate, we know there’s a lot more pressure on them than if they worked for someone like Safeway, Kroger, or Whole Foods Market, where I spent 2+ decades of my life.

So does all that extra responsibility add up to extra dollars? Let’s see!

On average, grocery store owners make around $62,419/year according to Indeed.com. But there’s a lot that factors into that, such as:

Some grocery store owners, like a small specialty shop on the streets of NYC, for instance, might clear multiple 6 figures. By comparison, a Grocery Outlet store in a neighborhood that’s heavily reliant on food stamps might only earn $60,000/year.

Bear in mind too, it’s hard to get exact numbers from independent grocery stores that aren’t publically traded. There are no financial reporting requirements, nor are grocery store owner salaries listed on sites like GlassDoor.

A franchise like the one offered by Grocery Outlet Bargain Market or Save-a-Lot can be a great way to own your own business (sort of) and can pay really well too.

It also gives owner-operators the freedom and flexibility to run their stores how they wish (sort of) and keeps a nice chunk of the profits while at the same time, also giving them a certain level of corporate security and systemization.

I have a recent article that breaks down the Grocery Outlet Franchise program and whether or not it’s worth it. I get into everything from earnings potential and how they split profits, including the 1 thing that would probably prevent me from doing it.

But they do have some owner-operators making $300k/year. So for many, it’s a great opportunity. Just click the link to read it on my site.

From working at his uncle’s store as a young boy to opening his own in 1997, the grocery store business is a family tradition. pic.twitter.com/THvJ8XNeQ7

“He’s done [things] for people I’ll never know about, but that’s just the kind of person he is.” Mark Presley, a grocery store manager, is going above and beyond to serve customers during the pandemic. Meet him in a couple minutes at 6AM @NC5 pic.twitter.com/9Eyu8sYmuM

How much do grocery store managers make a year?

I was a GM for Whole Foods Market for well over half of my 20+ year career. Whole Foods calls their GMs Store Team Leaders.

During that time, I ran 4 stores and was an Associate Store Team Leader (assistant GM) in 4 other stores.

On average, and bear in mind the last time I did this was in 2013, so it’s been a little while, I made in the low 6 figures. While I knew some store managers who made around $150,000 a year (salary plus bonuses), I never got that high.

Officially on their website today, Whole Foods lists the starting salary for their GMs as $99,000/year.

But while I’m sure things have changed since Amazon bought them, that’s most likely without bonuses. The bonus structure for Whole Foods Market store managers provided a quarterly bonus on top of their salary. The bonus was based on a somewhat complicated profitability calculation.

So while in a store that wasn’t doing well, that bonus could be nothing, I also knew store managers who bought brand new Jaguars with just 1 of them.

But outside of Whole Foods, here are how store manager salaries stack up in other grocery stores, according to GlassDoor.

The interesting takeaway here is how wide the range is for essentially the same job.

On the low end, we have Piggly Wiggly and then The Fresh Market, and on the high end, we have Publix. Of course, I can see why a Publix GM would make more than Piggly Wiggly. Publix stores are much larger, with more moving parts (like a pharmacy), and do a lot more sales volume.

By definition, larger sales volume means more employees and more customers, all of which take up the time of a GM.

I was a little surprised Wegmans was so relatively low given they are somewhat similar to Whole Foods, just exclusively on the east coast.

It was also interesting to see a difference between Safeway and Albertsons given they are the same company and their stores are similar.

How much does a Walmart store manager make?

While people love to make fun of Walmart (or at least their customers), Walmart store managers do quite well, on average.

Going back to GlassDoor for my research, Walmart GMs make between $100k/year up to $141k/year.

But there’s also no doubt that a Walmart GM probably deals with a lot more crazy stuff than I did with Whole Foods, not even counting the multiple instances of shootings that have happened there.

Obviously, if you’re running a large, newer Walmart in a large urban city, you’re going to make more than someone running an old 1980’s looking Walmart in rural West Texas.

But since the Walmart store manager gets a base salary on top of various bonuses. Let’s take a look at those:

Yes, is the short answer. At least compared against retail store owner salaries on average.

As I mentioned above in the Walmart example, the location of your store will make a huge difference in pay. It’s also very true that running a Wine shop in Manhattan is very different than running a convenience store outside of Memphis, so it is a little hard to compare apples to apples.

As a sole owner of a large retail store in a decent-sized city, there’s no corporation to back you up.

If your store isn’t profitable for 1 or more months, there aren’t dozens or hundreds of other stores making a profit to balance that out like there would be if you were simply a GM for a large company.

Done right though, your earning potential could be multiple hundreds of thousands of dollars per year; maybe as high as $300,000/year.

But many of these retail store owners will be franchise owners.

That not only means they don’t quite have the same freedom as a true independent store owner, but it also likely means they paid a lot of money upfront to join that franchise. After all, most franchise companies require an initial cash investment of anywhere from $10,000 to over $100,000.

On average, though, franchise owners can expect to make a cash investment of $20k-$35k.

If they then turn around, work like a dog only to earn $49k/year, that doesn’t exactly sound like paradise to me. Now it is true that if you are part of a franchise there is less risk and less start-up cash needed than if you truly opened your own business.

After all, a Subway franchise owner has the entire Subway marketing, distribution, and operations team behind them to help them succeed. A true independent owner has themselves and their employees.

Grocery store profit margins have a lot to do with how much the owner’s earning potential is.

I have an article that breaks down everything you need to know about grocery store profit margins, including how small changes could mean the difference between a 5 figure salary and a mid 6 figure salary.

Did I cover everything you wanted to know about grocery store owners and how much they make?

In this article, we took an in-depth look into the world of grocery store owners and how much they make in a year.

We examined not only their salaries but how they stack up against other retail industries. And we compared those salaries against what grocery store managers who work for a chain store might earn.

Ultimately, we answered the question of how much does a grocery store owner make?

If you’ve ever wondered whether owning your very own grocery store is worth it, it can be! I have a recent article that breaks down just how profitable it can be to own your own grocery store. I even cover start-up costs and everything you need to know to get going.