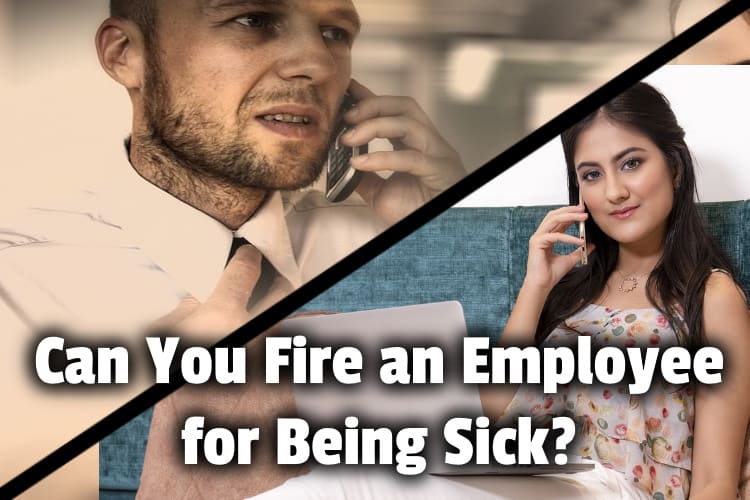 As a GM for 2+ decades, employees calling out sick was just a way of life. But many new managers wonder can you fire an employee for being sick.

Here’s what I learned after many years:

No. You cannot fire an employee for being sick. But most employers have an attendance policy and instead would document unexcused absences over a period of time, and eventually fire them for excessive absenteeism, after a series of warnings.

But there’s a lot more to know about employees calling out sick and how you can legally discipline them for that.

So here, we’re getting into absenteeism and what constitutes excessive absenteeism. But we’ll also examine whether an employee can get fired for that and if so if there should be some sort of due process leading up to that.

And what if you are sick a lot and have to use PTO? Can they fire you even if you use PTO?

Click here to read my complete guide to PTO laws and the 1 way they could actually fire you for using it even if you are legitimately sick or on vacation.

As a leader for Whole Foods Market for over 2 decades, I learned a lot, saw a lot, made a number of mistakes, and learned from them too. I also, unfortunately, had to fire a lot of employees, many for excessive absenteeism.

So this is familiar territory. Let’s dive in!

Do you wish to link #pay to #attendance to discourage excessive absenteeism? #greytHRhttps://t.co/cqrmXHQAQG pic.twitter.com/VkUWxfVJ9w

What is excessive absenteeism?

But first, we need to understand what exactly is “excessive”.

This isn’t middle or high school and a doctor’s note doesn’t necessarily excuse an absence. It’s also important to understand that while an employer may be subject to state or federal laws, in many cases, it’s up to the employer to decide.

This is especially true in an “at-will” state.

An at-will state is a state in the US that basically allows employers to fire anyone for any reason at any time.

I go into a lot more details about what an at-will state is, including a state-by-state guide, in a recent article geared towards how to fire an employee with a bad attitude.

Now, having said that, I firmly believe that employers have a moral obligation to be firm, fair, and consistent. And an obligation to make expectations and consequences crystal clear.

If you fire an employee and they are genuinely surprised, you failed as a leader.

First, you need to have a company policy guidebook in place which spells out all your company policies, including your attendance policy.

This should include what the correct procedure is for calling out sick as well as how many sick calls in a set period of time constitute excessive absenteeism.

Excessive absenteeism can be costly for any business in terms of both replacement costs and lost productivity.

When I was a leader for Whole Foods, we defined excessive absenteeism as the following:

The national average for sick days is currently 9 per employee per year, so just under what Whole Foods would have found unacceptable.

But whatever policy you set for your company, have it apply to everyone (including yourself) and enforce it evenly and consistently. Double standards and hypocrites rarely make for successful businesses long-term.

If a boss does go to fire you, can they do that by phone or email?

Click here to read my complete guide to how terminations are supposed to happen and if phone or email is a legitimate way to do it, what happens if they break the law in doing it, and what your rights are as an employee.

Do you wish to link #pay to #attendance to discourage excessive absenteeism? #greytHRhttps://t.co/prSBAm5Amm pic.twitter.com/FkjDlZPfjk

How do you handle an employee with excessive absences?

I’m a firm believer in following a 3-step process for virtually all offenses except violence, harassment, and theft. Here are the 3 steps in handling an employee who is excessively absent:

Next, have a monitoring system in place for everyone from the top down.

Ideally, don’t put this place in response to an employee problem; just have this tracking system in place as soon as possible; ideally from the beginning.

You can use a calendar, an Excel spreadsheet, or some sort of online program or app. Then have a tab for each employee and every time they are not at work when they normally would be, note which of the following categories that absence falls into:

Every time someone is absent, you record that absence. Then perhaps monthly, you review the logs of everyone and see if anyone has exceeded the attendance policy for your company for unexcused absences.

Can I terminate an employee for excessive absenteeism?

Yes. Employees who are excessively absent can be terminated. But have a set system for monitoring, documenting, and communicating about excessive absences, and ensure all employees, including yourself, follow the same rules.

After all, if you have 1 employee who calls out all the time, and the rest are rock solid, it’s putting a huge burden on those other great employees. So you have an obligation to deal with the absent employee, even if their reasons for constantly calling out seem “reasonable”.

Now, if they are a single mom I don’t want you to be heartless.

So stick with being firm, fair, consistent while also being compassionate.

Ultimately, if you have a fair attendance policy and it’s made clear to everyone when you hire them, then if they aren’t meeting that policy and you’re communicating clearly when there are infractions, it’s 100% on them if you later have to fire them.

Just make sure that everyone on the team (yourself included) is held to the same standard.

Can you get fired for being sick with a doctor’s note?

Most employers would not fire an employee for being sick but instead would fire them for being excessively absent. A doctor’s note would not be a factor unless the employer was legally obligated to offer the employee a medical-related leave of absence.

In an at-will state, you can be fired at any time for any reason, although reputable employers will go through some sort of due process with performance issues.

Now if you have an ongoing medical issue, you may be able to request an FMLA leave (Family Medical Leave Act). However, in order to be eligible and request an FMLA leave, the employer has to be what’s called a “covered employer”, which basically means they have 50 or more employees.

Then, you as the employee have to meet certain criteria such as:

So if you just started or work for a small company with a handful of employees, the employer is NOT obligated to grant you an FMLA leave. That doesn’t mean they won’t grant you leave, and doesn’t mean they may not have options spelled out in their attendance policy.

But they aren’t Federally mandated to offer you a leave.

Wrongful Termination is one of the worst employee-related issues an HR department or an entire company can get involved in primarily because it involves tedious processes and investigations, not to mention a lawsuit.⁠ ✔️⁠ pic.twitter.com/5SmwbctIkN

Can I sue my employer if I’m fired for being sick?

In the US at least, unfortunately, anyone can sue anyone for pretty much any reason.

That doesn’t mean you’ll win or that your case has merit. But people file lawsuits every day. Ultimately, you’re not likely to be fired just for being sick. If you work for a reputable employer they may fire you for excessive absenteeism.

But ultimately you’re being fired for being unreliable and being a burden to your fellow employees; not because you’re sick.

And if the employer has done a proper job of creating an attendance policy, is consistent with all employees in enforcing that, and there is a clear written paper trail documenting your infractions, you will most likely lose the case.

This is even truer if you live in an at-will state.

In short, filing a lawsuit will cost you time and money and you’d be far better off putting that time, energy and money into finding a new job and owning your role in losing the previous one and learning the lessons from that experience.

Stress, depression & anxiety account for the highest number of sick days according to the LFS 2017/18 Surveyhttps://t.co/zu1PaCQKLw #wellbeing #wellness #wellbeingintheworkplace pic.twitter.com/L8FMPaPSNc

How many sick days are reasonable?

So, as you can see, somewhere between 7 and 9 sick days a year probably going to be considered reasonable by most employers.

“Reasonable” will be very different depending on the type of work. But also how many employees there are and how easy it is to get someone to cover your shift.

At Whole Foods, all the stores I worked in and ran had hundreds of employees. That made it easier to cover people who called out sick. A store with 4 employees would have a much harder time dealing with that.

What if you sometimes miss work because you work a 2nd job?

After all, in today’s economy, many of us work 2 or more jobs. And every once in a while schedule conflicts crop up. Click here to read my complete guide on having a 2nd job, whether an employer can fire you for having one, and whether you should lie about it or not.

Did I cover everything you wanted to know about whether you can fire an employee for being sick?

In this article, we took a look at the world of employee absences.

So today we explored the definition of excessive absenteeism and the right way for an employer to handle that. But we also explored how doctor’s notes might factor in and what’s reasonable on both sides.

Ultimately, we answered the question can you fire an employee for being sick?