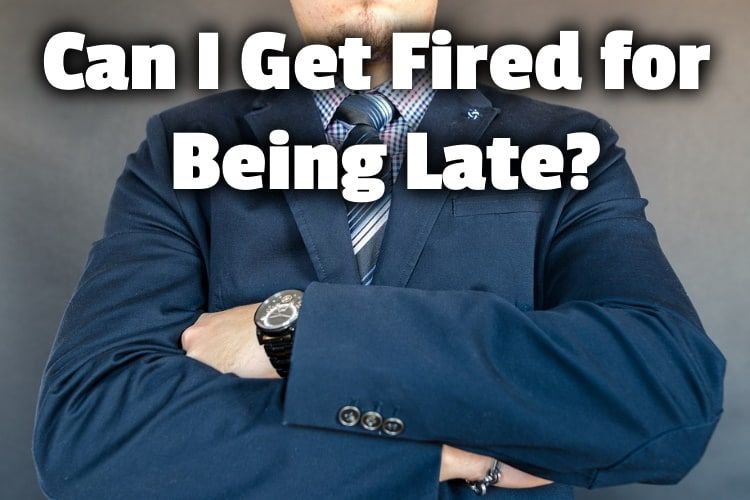 Everyone is late to work sometimes. Things happen. Traffic accidents en route, you forget something and have to turn around, or you just wake up late. But those new to the job market often wonder can I get fired for being late?

Here’s what I know from decades of hiring and firing:

But there’s a lot more to know about lateness, including which states are at-will, and how late is too late for most employers. So let’s keep going!

Lateness. It happens to everyone occasionally.

Keep reading to find out!

How To Get Ready Faster In The Morning So You Don’t Get Fired For Excessive Lateness https://t.co/QUurFPJzKZ pic.twitter.com/8z6jmXTGHL

Can you get fired for being 5 minutes late?

It is perfectly legal for an employer to fire you for the sole reason that you are a few minutes late.

Just click that link to read more on my site. After all, while there are lots of things you could be fired for, that doesn’t mean it’s likely.

In fact, you can get fired for anything that’s not protected by the Equal Employment Opportunity Commission (think gender, race, pregnancy, and disability), particularly if you are an at-will employee.

There are some exceptions to at-will employment.

If you work in the public sector, if you are a union worker, or if you are refusing to violate public policy, you cannot be fired for no discernible reason.

You should be aware of whether or not you are an at-will employee and chances are, that you are an “at-will” employee, as all states recognize at-will employment, with a few states that have limitations in place, in addition to federal law.

If you are a citizen of one of the states listed below, you should refer to those laws and regulations as it relates to employee’s rights. These states have various limitations and restrictions as it pertains to at-will employment.

Here are all of the at-will states:

How many minutes can you be late to work?

This really depends on the policy in place at your job.

There is a saying that if you aren’t fifteen minutes early, then you are late. This is generally a good rule to live by.

People at your job depend on you to be there on time.

Coworkers may depend on you to relieve them from their shift. If you are just one minute late, you are the reason they aren’t getting off on time. By being late at shift change, you are sending the message that your time is more important than your coworker’s time.

If you work in an office with set opening hours, you’re letting your boss down and potentially causing her to lose clients.

For example, let’s say you work at a law firm that is supposed to open at 9:00 a.m. If a potential client calls the office at 9:05 and no one answers the phone, they are going to call a different lawyer.

By being five minutes late to work, you’ve just cost your boss potentially thousands of dollars.

Do you find that you are often just a few minutes late because you work two jobs?

In this recent article, I talk about how you could get fired for working a second job if it presents a conflict of interest.

Principal who was fired for excessive lateness files lawsuit to get… https://t.co/539H8T7C68 #US #US #Law #Police pic.twitter.com/a1LrHblV43

How many times do you have to be late to get fired?

The short answer is it depends on the company you work for and what their policies are on attendance and punctuality.

Think of it this way – employers are investing in their employees, and they want them to be on their A-game.

This means coming to work on time.

However, there should be some relatively clear guidelines in the employee handbook that address the number of allowed times you can be late.

Some companies may give verbal warnings followed up by a written warning for being late too many times. If you are late after the written warning, you may then be fired.

The best rule of thumb, however, is to show up on time or at least a few minutes early.

Guess who’s really late for work, but has her #starbucksxtaylorswift pic.twitter.com/5MTThbgtvK

What is the grace period for being late to work?

This is another one to check your handbook on.

I ran stores for Whole Foods Market for decades, and in that time hired thousands, and, unfortunately, had to fire a few people too.

With that company specifically, their policy on time and attendance generally allowed a 5 minute grace period. There were more concerned with excessive absenteeism and excessive tardiness than a 1-time issue. Tardiness of greater than 30 minutes, however, was counted as an absence.

People are counting on you to be on time. Coworkers, bosses, customers, sometimes even vendors.

If you are going to be late, make sure that you have several phone numbers for employees and managers.

As soon as you think you are going to be late, call them to make sure they know. Be honest. If you overslept, tell them and give them an ETA.

If you were going to be early, but you hit an accident on your way into work, call and let someone know.

Communication is important. It shows that you are responsible and value everyone else’s time as much as your own. It also makes being late not so stressful.

If you come in late without letting people know, they are going to be stressed out, too.

On the other hand, if you communicate with them, they will be able to make any necessary arrangements because they know what to expect from you.

Is one minute considered late?

Probably not, but yes, technically.

If you get to work one minute late, you’re going to be frazzled and not entirely ready to start work.

There’s always what I like to call a settling in period before starting work. You’ve got to clock in, talk to other team members, and remember where you left off when you left work last.

If you are coming in late, you’re not going to be ready to work, even if it’s just a minute. And if you’re relieving someone of their shift, they are going to be annoyed. That’s just going to add to your already high-stress level.

Many jobs have meetings first thing in the shift. If you are one minute late, you are making people wait for you to get started.

If they’ve already started, then you are interrupting and causing people to stop for you to grace them with your appearance.

Grace Period | How does Grace Period work with Examples?https://t.co/v59ieoMPdx#GracePeriod pic.twitter.com/hbo1V2IkRw

Can I get a written warning for being late?

Many employers won’t fire you the first or even second time you are late.

They understand that you have a life outside of work and that things happen. They may, however, give you a verbal or written warning for being late.

If you are late because you are looking for another job, you may not get fired solely for job hunting. But you may get fired if you are consistently late or calling out as a result of your job search.

To learn more about that and what can legally happen when you are job hunting on the side, read this recent article on my blog.

Did I cover everything you wanted to know about whether you can get fired for being late?

Chances are that you won’t get fired for being late once or twice. It happens to the best of us.

However, if you are consistently late, it shows that you don’t really value the time of your coworkers, managers, or customers.

A good rule of thumb is to be 15 minutes early for every shift every time. This shows that you value everyone’s time.

It also gives you a chance to settle into work mode so that you are ready and able to bring your A-game to the office.