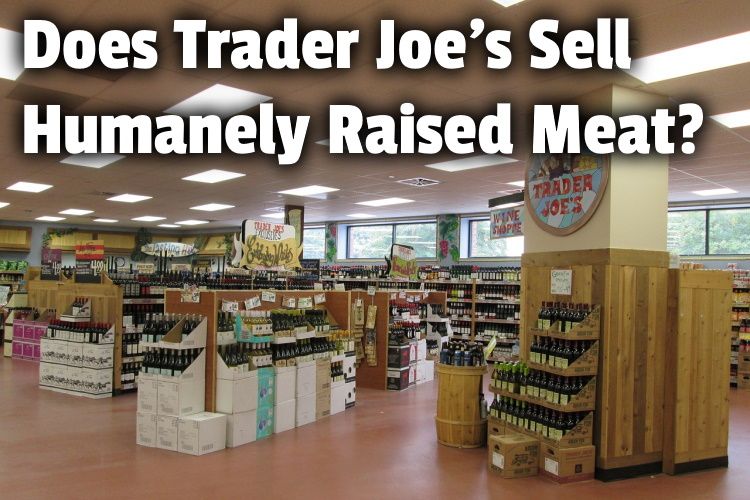 Trader Joe is known for a lot of quality groceries at great prices. But they don’t have a full-service meat department, so does Trader Joe’s sell humanely raised meat?

In this article, we’ll find out whether Trader Joe’s carries pasture-raised chicken and where it sources its meat.

We’ll check out whether it has meat quality standards. And we’ll also look at what humanely raised actually means. The answer might surprise you!

Does the phrase humanely-raised really mean anything?

The phrase humanely raised, as stickered on meat products, does not have any legal definition. Therefore, it does not really mean anything. However, many producers do use this to infer that their meat and poultry are free-range or pasture-raised, and therefore more humane than large commercial meat processors.

So don’t expect it to mean anything specific.

Now having said that, if that phrase is also accompanied by free-range or pasture-raised, we can at least feel fairly sure those practices are happening.

What other phrases don’t mean much or don’t have any actual legal definition?

I know many of us look for hormone and antibiotic-free when we buy our chicken.

Unfortunately, in many cases, it simply means they weren’t given those things within 3 months of slaughter. It does not necessarily mean they have NEVER been given those.

Whole Foods Market’s meat standards, however, specifically state their meat and poultry are NEVER given those things at any point in the animal’s life.

Other than that, the only real guarantee is to buy organically grown meat and poultry.

Beyond that, there is an organization called CertifiedHumane that certifies certain producers that meet certain standards. And if you see their sticker on meat or poultry products, that means:

“that the food products have come from operations that meet precise, objective standards for farm animal treatment.” (source).

A beautiful meal made by F12 People’s Kitchen for people facing unsheltered homelessness in our community. Made with green beans, delicata squash, and butternut squash that NCFA purchased from Kilimo Minnesota farmers, plus chicken donated to us by Trader Joe’s. #foodshare pic.twitter.com/5v9vxdvxwO

Trader Joe’s all-natural Heirloom chicken brand is pasture-raised. They are slow-growth chickens that do not contain antibiotics, and hormones have not been added to them.

What are heritage chickens? I am glad you asked. Heritage chickens are sired from eggs hatched by an American Poultry Association Standard breed prior to the mid-20th century.

These are chickens that are naturally mated, have had a long productive life outdoors, and are slow-growing. They’re usually not as big as their more modern cousins, but they are juicier and more flavorful.

They tend to be a tad more expensive too.

Because of the circumstances under which heritage chickens are raised, they are believed to be healthier and happier. After all, this is the kind of environment mother nature wanted for them.

Going by the above, we can infer that some of the meat products on offer at TJ’s have been humanely raised and are consequently of good quality.

Where does Trader Joe’s source their meat?

Like most Trader Joe’s products, their meat is bought from other companies under a “private label” arrangement and is repackaged as its own. Some of those meat companies include Kayem Foods, Teva, and Empire.

In addition to this, it also sells meat branded from other companies.

It’s common knowledge that Trader Joe’s is secretive about its sourcing. So, we may not always know where it gets its meat.

And their sources probably change from time to time.

But it disclosed on its website that it takes great effort to make available non-GMO and organic products available. And in addition, they revealed that some of the meat are conventional —- they have been raised with antibiotics.

Leaving TJ’s for a while, between Sam’s and Costco, which store would you say has better meat?

In a couple short years an @NHLSeattle_ sweater will accompany the jerseys displayed above the meat aisle at the Queen Anne Trader Joe’s 🏒 pic.twitter.com/pcSfAwMBt0

Trader Joe’s has general meat quality standards. Those standards include no artificial ingredients or preservatives, no MSG, no GMOs on their private label, and their commitment to offering some meat and poultry that is free of artificial growth hormones and antibiotics.

But compared to the extensive standards of competitors like Whole Foods Market, Trader Joe’s standards are fairly vague. (source) and (source)

For example, on whether it offers antibiotic-free meat and poultry, it states that it doesn’t presume to make decisions for its clients but rather provides products it thinks fit its customers’ needs, covering a wide range of considerations.

Basically, a wishy-washy cop-out way of saying they do have some products with those things.

It reveals that their meat and poultry are from both conventional and non-conventional sources. The former are those where it’s likely that antibiotics are used, while the latter are sources that can be described as organic, all-natural, or that are explicitly described as antibiotic-free (ABF).

It further states that following customer feedback, it goes to great length to ensure that the latter variety of meat and poultry is consistently available. But it was unable to confirm if the animal products it sells were from animals raised with GMO feed.

So, on the whole, its selection is a mix of organic and inorganic products, and the standards are not very developed. But TJ’s forthright about the nature of what it sells.

Have you ever wondered where Aldi gets its meat from?

Are they really from China? Well, that’s what I explored in a recent article. In it, I looked at the kind of meat that Aldi sells and whether its meat actually comes from China. But I also revealed the truth about Aldi’s meat quality. I even spoke about whether Aldi sells USDA beef.

How does Trader Joe’s meat compare to Whole Foods?

In other words, while both offer all-natural meat and poultry, TJ’s also offer some that are not any different than what you’d find at Safeway or Kroger.

And to be honest, Whole Foods has an elaborate and codified set of standards regarding meat that is acceptable. There is a 5-step certification for meat quality. The welfare of the animals that are slaughtered is prioritized.

The information on meat quality at Trader Joe’s is sketchy, and there are no dedicated butchers in its stores. Whole Foods have butchers that have undergone intensive training in all its stores.

So, one can ask them for more information about the meat on offer.

Truth be told, meat is not Trader Joe’s strong suit, and its meat is prepackaged. That makes things handy, but what if you’d rather buy something fresh?

Now, if you’re a lover of steak, you know that one of the most important steps is to ensure that you get started with high-quality steak, right?

So, is Prime steak worth it?

That’s what I explored in a recent article of mine. I looked at whether Choice or Prime beef is better and whether Angus is better than Prime. But I also revealed what percentage of steak is prime. I even spoke about whether Costco’s Prime beef is really Prime.

Where does Trader Joe’s source their chicken?

Trader Joe’s chicken is sourced in the U.S.A. However, they do not reveal the poultry farms that provide their chicken.

There are 3 categories of chicken at Trader Joe’s:

Butcher Shop (with a red label)

All Natural (with a green and brown label)

You’ve probably wondered at one point or another about which grocery store has the best steak. Well, I’ve got you covered because in a recent article I revealed the top contenders.

In it, I shared a graphic that shows a steer and the parts of it that steak comes from and I outlined what makes one steak better than the other.

But I also revealed which supermarket has the best quality meat. I even explained whether organic grass-fed beef is better, and what it even means.

In the article, we found out whether Trader Joe’s carries pasture-raised chicken and where it sources its meat.

But we also checked out whether it has meat quality standards. Then, we looked at how its meat compares with Whole Foods.

Lastly, we looked at where Trader Joe’s gets its chicken from.

Image by conversationswithval from Pixabay

link to Is Sprouts Better Than Trader Joe's? (No. Here's why)

Both Sprouts Farmers Markets and Trader Joe's are known for mostly selling all-natural foods at low prices. But is one different or cheaper than the other? More specifically, is Sprouts better...

Grocery stores order a lot of meat from suppliers. But if they order too much, they have to throw a lot away. Too little and they run out. So when ordering, cutting, and packaging the meat, how do...