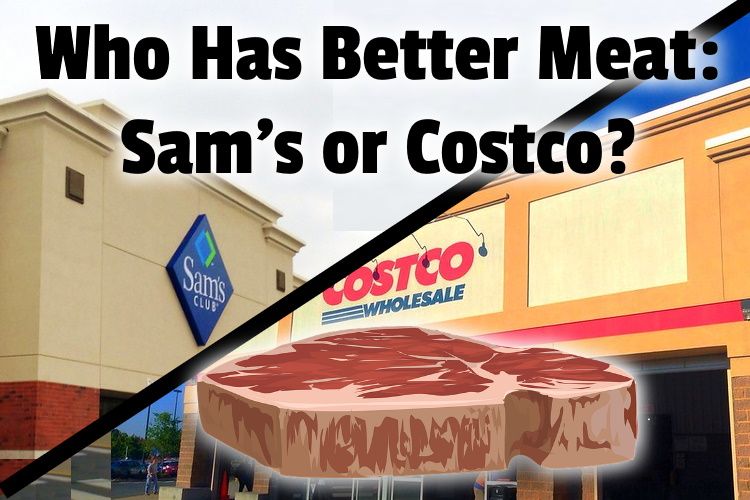 Most grocery stores sell meat, but meat quality varies from store to store. Sam’s and Costco are two big competitors but who has better meat: Sam’s or Costco?

Here’s what I learned in trying both:

Sam’s Club has better prices on Meat compared to Costco, but Costco has fresher meat. Both Sam’s Club and Costco offer USDA Prime meat in addition to Choice.

So ultimately, I lean towards Costco.

And that’s not a big surprise considering Sam’s Club is part of the Walmart family who is known more for low prices than quality products.

In the following paragraphs, we’ll get into detail on meat from both places and also the criteria for selecting quality meat. So you can always select the tastiest. Prior to becoming a consultant, I worked as a general manager for 20 years at Whole Foods.

Sam’s Club offers quality meat that is USDA-graded meat in Choice and Prime categories primarily. It also offers meat and poultry free of hormones and antibiotics.

The selection includes an array of popular cuts such as whole briskets, ribeye, striploin, sirloin, and tenderloin.

It’s vital to note that meat quality is not a subjective value. The USDA “rating” is the standard you can always count on.

But, statistics show that about only 48% of those surveyed believe they understand the basics. What does the USDA standard entail? I’ll touch on it briefly.

There are eight different grades. But the first three are the most vital. The following are the grades:

Of course, most grocery stores only deal with the top 3 of those categories.

Marbling, the maturity of the beef, and the color and texture are the major criteria. The key criterion used in the grading is the marbling.

This is what makes it flavorful and tender. It’s the spread of the intramuscular fat in the beef. Naturally, it depends on the cut. The cut between the 12th and 13th rib is of the highest grade. That’s Prime.

Sam Club’s offerings meet the expected standard, they are labeled as such, and they come highly rated. So, yes, their meat quality is good.

But how is Costco’s better?

Never miss out on another Sam’s Club deal. Add the Slickdeals browser extension to shop and save at checkout. 👇 https://t.co/eVdLjC9Vk0 pic.twitter.com/EvLzfgo0iU

Costco meat is considered high quality, and better than many grocery chains including Sam’s Club. While both chains offer similar offerings, Costco meat is generally regarded as fresher.

As we’ve seen above, meat quality is not a subjective value. So both Sam’s Club and Costco offer prime quality meat (pun intended). It’s hard to say which one’s better. In fact, some believe you could flip a coin and simply choose.

The issue of where one can get the best quality steaks is one that I’ve invested some quality time in.

I shared my findings in a recent article of mine. In it, I shared, amongst other things, the different types of steaks there are and how to tell what makes one better than the other. As you’d expect, I also revealed the supermarket with the best steak.

Sam’s Club’s meat is not from China. Its meat is sourced in the United States. Nebraska beef, National Beef, Excel, Swift, IBP, John Morrell, and Farmland are examples of such meat processors Sam’s Club gets its meat from.

You know that the club is owned by Walmart, right? So, there’s actually a policy in place around how it sources its products, meat included.

Walmart (and, by extension, Sam’s Club) is one of the leaders in the promotion of sustainable supply chains. They’re out to help people live better and preserve the planet.

Their sustainability efforts also concern how animals are treated prior to being killed for sale.

They work with packers who breed, kill, and cut up different animals for sale. They have standards that meat suppliers have to meet. “We have a corporate policy on animal welfare as well as ethical standards that suppliers are expected to comply with,” says Gripe.

At the time of writing, Brian Gripe is the meat buyer for Sam’s Club.

Like most grocery stores and restaurants, the club gets its meat from US-based professional packers who have a huge processing capacity to supply beef and pork at scale.

Statistics show that most buyers are highly-sensitive about meat and other fresh products they buy. In fact, it’s one category that’s not responding very well to e-commerce sales because buyers want to see and feel the meat.

Stores are naturally sensitive to this fact and also to how some buyers tend to be wary of fresh food items from China. This is even more delicate in this era where the pandemic is still exerting its hold on most countries.

Now that we know Sam’s Club gets its meat right here, let’s check out who has the better brisket.

Costco vs. Sam’s club brisket – which is better?

Most people prefer the brisket at Costco, although both are very similar and high quality. Costco’s brisket is perceived to have slightly better flavor and texture.

To decide which club has the better brisket, we’d have to get started knowing two things: what’s termed “brisket” and how to tell which one is better. Brisket is the Holy Grail of meat.

The name brisket derives from old Norse, and it means cartilage. It’s cut from the breast or lower chest of veal or beef. It’s the pectoral muscle and weighs between 12-20 pounds. You can see that it can be large.

This is why it’s usually cut into two pieces: the flat and the deckle point.

The first is leaner and cuts easily, while the second is marbled. The flat is carried by most grocery stores. Both are called “packer” briskets and offer you greater value if you can afford it.

Go for Select grade if you’re on a budget.

But Prime is ideal. Go for one whose flat is at least 1 inch thick at the end. Flat or point? You always want meat that’s marbled.

But, if you don’t want a lot of fat, flat is better. Costco or Sam’s club? Taste is subjective. But, many experts give it to Costco. Here is an example of a test.

Costco vs. Sam’s meat prices – which is cheaper?

Although if we’re looking at the average cost of products across the whole store, Costco offers cheaper prices, while you’ll get a better selection at Sam’s Club. Naturally, the prices may be cheaper or pricey while looking at specific meat products and grades.

Sam’s Club has more stores in the US than Costco.

This could also be a factor, because if there’s a store not too far from where you live, overall, that could bring your total cost down. So, when it comes to meat, and you want something that won’t require a king’s ransom, Sam’s Club is better.

Have you ever wondered how grocery stores keep their meat fresh?

That’s what I explored in a recent article of mine. In it, I looked at how long meat can be kept fresh before it goes bad, and whether meat from the grocery store is just as good as meat from a butcher.

In the preceding paragraphs, we explored which membership club (Sam’s or Costco) has better meat.

We checked out the USDA criteria for grading meat. We learned of 8 different grades. Of course, only three are typically sold in grocery stores.

We found out whether Sam’s Club’s meat is imported from China, and we looked at which Club has better brisket, and we wrapped it up by looking at which one has better meat prices. If you prefer brand-name products, go to Sam’s Club. Costco sells more private label products.

Costco has better quality meat, but at a slightly higher price, than Sam’s Club.

Costco and Sam’s Club by Mike Mozart are licensed under CC2.0 and were cropped and edited together with a graphic and text overlay

link to What is the Least Chewy Steak?

Steak is one of life’s rare pleasures. But if it’s not cooked right, it can be tough and chewy. So, for the home cook, it can be a hard skill to master, so what is the least chewy...

Continue Reading
link to Is DoorDash and Grubhub the Same Company?

Food delivery apps are all the rage now, and for a good reason. They make food ordering and delivery super-convenient. But, telling them apart can be challenging. You've probably wondered, is...

Hi! I'm Jeff Campbell. I was a leader for Whole Foods Market for over 2 decades. I worked in 9 stores in 4 states, not counting the hundred-plus stores I've assisted in other ways. I was a Global All-Star, a Gold Pen Winner, and won Top-10 Store (company-wide) 3 times in addition to Best New Store (company-wide). These days, when I'm not spending time with my wife & 3 daughters, I can usually be found practicing martial arts, consulting for others in the industry, and blogging on my other blogs over at KitchenApplianceHQ.com and Middle Class Dad.

The Grocery Guy is owned and operated by Jeff Campbell/Middle Class Dad. Middle Class Dad is a participant in the Amazon Services LLC Associates Program, an affiliate advertising program designed to provide a means for sites to earn advertising fees by advertising and linking to Amazon.com. Middle Class Dad also participates in affiliate programs with Siteground, Clickbank, CJ, BuyerZone, ShareASale, and other sites. Middle Class Dad is compensated for referring traffic and business to these companies, but in no way increases the cost to you if you opt to make a purchase from my links. *Please note that I am not liable for quotes, products, claims or any work performed through BuyerZone or its suppliers.


Book a Consultation with Me!