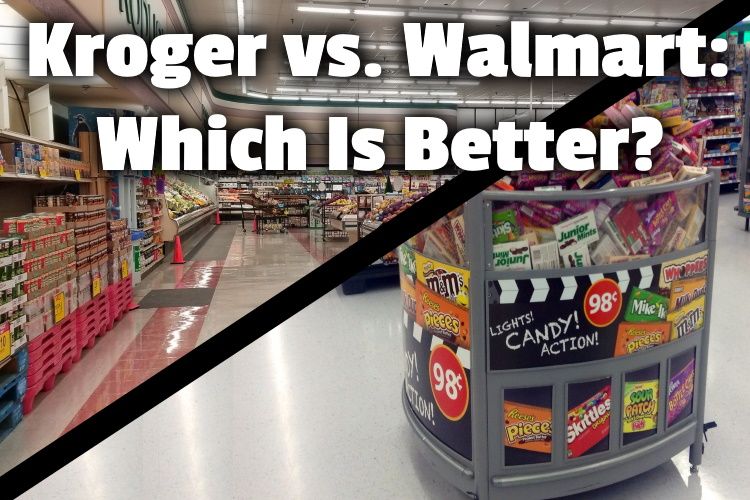 Kroger is the second-largest grocery store in the US after Walmart. But many Kroger shoppers wonder if it’s really worth paying more money for groceries than if they shopped at Walmart. So today, we’re looking at Kroger vs. Walmart.

Kroger vs Walmart: They are 2 of the largest grocers in the US. You can save money shopping at Walmart, but Walmart picks inventory based on low price more than quality. At Kroger, you’ll get better quality meat & produce, and Kroger’s Simple Truth private label lines mean low priced natural & organic food items too.

But there is much more to know to find out if Kroger is better than Walmart, and how.

We’ll compare their prices and produce quality. We will also discuss if being unionized has any effect on the working, produce quality, or prices of a grocery store.

No matter which you prefer, skip the lines and hassles, and order from Walmart or Kroger through Instacart.

Just CLICK HERE to learn more and get your groceries on their way!

Kroger’s had Kahn’s hot dogs back in stock. It’s been a long wait this summer. #Kahns #HotDogs #Kroger pic.twitter.com/aCGmqhnMvC

Is produce cheaper at Walmart or Kroger?

Overall, grocery prices at Walmart are about 4% less than they are at Kroger. However, Kroger is cheaper than Walmart when it comes to proteins, dairy, and overall produce. (source)

Kroger offers steep discounts on a few of the most purchased items, like apples, green grapes, baby carrots, and bell peppers. However, most of the remaining produce, like bananas, spinach, pre-cut produce, and organic produce are more expensive at Kroger.

Kroger is also one of the largest organic-food sellers in the country. They sell more seasonal products and work with startups to make their produce last longer.

The price of produce is important, but the freshness is key. If the produce isn’t fresh, shoppers won’t want to shop at the store.

Another important factor is meat. Walmart may have cheaper produce, but their meat quality is lacking.

The best meat, especially steaks, can be found at Whole Foods. Check out this recent article about what makes a good steak and why Whole Foods is the best place to buy them.

dang Kroger got the goods pic.twitter.com/JUhgBNCjHa

Is Kroger higher priced than Walmart?

Walmart and Kroger have been in a price war for quite a while.

According to Business Insider, Walmart’s groceries are about 4% cheaper than Kroger’s. Besides, the most expensive groceries on Kroger’s shelves are nonperishable and frozen items.

Kroger is 3.3% cheaper in the “fresh” category for things like proteins, dairy, and vegetables. But that’s mostly because of steep discounts on staple items like eggs, green grapes, baby carrots, and chicken breasts.

Without those items, Kroger’s “fresh” items were 15% more expensive than Walmart’s.

Even though Kroger has been aggressively reducing prices to better compete with Walmart, they just can’t seem to get at Walmart’s price point.

Even though they both sell groceries, Kroger and Walmart are considered “supermarkets.”

While the terms grocery store and supermarket are often used interchangeably, grocery stores are usually more focused on a specific category of food or targeted demographic.

Supermarkets have lots of choices, counters with butchers, and fresh seafood. To read more about the differences between grocery stores and supermarkets, read this recent article.

I’m at the Walmart Drive-In and they give you a free bag with a bunch of snacks and drinks and this is so cute 🥺 pic.twitter.com/3crAW1IHSM

How does Kroger vs. Walmart quality compare?

When it comes to fresh items, like meat and produce, Walmart’s quality is not as good as Kroger’s. In fact, most grocery stores will have better quality meat and produce than Walmart.

I’ve found that Walmart’s produce tends to go bad quicker than Kroger. And their meat is not very good.

While Walmart is still cheaper, Kroger has a better variety of processed foods. For example, if there is a certain brand of cereal bar that you like, and Walmart sells it, it will likely be cheaper at Walmart. But if you want more choices to pick from, Kroger will be the better option.

Kroger also carries more and better name brands than Walmart. Many times Walmart will only have one or two brands to choose from.

Therefore, if the price is your most important factor, Walmart is a better choice. You’ll save more money at Walmart. But if quality and variety are important, Kroger will be your better option.

Is Kroger bigger than Walmart?

Walmart is the largest grocer in the US, with more than 5,000 locations nationwide.

Stores under the Walmart umbrella include supercenters, discount stores, Neighborhood Markets, Sam’s Clubs, and small-format stores. And they can be found just about everywhere. In fact, they are in 49 of our 50 states here in the US (Hawaii is the lone exception).

According to Forbes, Walmart exceeds $500 billion in sales every year. And it’s really no surprise.

Their prices are low. They are constantly making it easier for customers to make purchases. Shoppers shop online for groceries or for retail items.

Customers can then have their groceries delivered to them, or they can pick them up without ever having to go to the store.

As far as retail items, Walmart has again made it easy to pick up purchases at Pickup Towers. This makes it super convenient to purchase what you want without spending time roaming the store and waiting in long lines at checkout.

As the second-largest retailer, Kroger has 2,764 stores.

Though Walmart may have more stores, Kroger covers more ground. However, Kroger’s sales are significantly less than Walmart’s, which has about $121 billion in sales every year.

Also, Kroger’s chicken is likely better than Walmart’s chicken, which is known for low prices, but not quality.

To read about what grocery stores have the best meat, check out this recent article.

Let @Walmart help you take care of the dessert(s) next week for Christmas dinner. #ad Create a dessert bar by picking up all of these goodies utilizing Walmart’s Grocery Pickup service. https://t.co/e3A0eKlh2t #WalmartHolidayRead #drinkresponsibly pic.twitter.com/O1J4QRB0QO

Are Kroger or Walmart Unionized, and does it make a difference?

Walmart is not unionized, but Kroger is.

People complain a lot about how Walmart treats their employees, but having a union doesn’t necessarily mean you’ll be treated better as an employee or have better working conditions.

Take a look at Publix. Publix has never been unionized but has been on Fortune’s 100 Best Companies to Work For for 23 years in a row. They’ve made it on the list every year since the list started in 1998.

And you’ll see similar positive results from Whole Foods Market, my former employer, which (for the most part) has remained steadfastly non-union since starting in 1981.

From what I could find, Kroger, despite being unionized, has never been on the list.

Labor unions were initially started to ensure that employees were paid a fair wage, received benefits, and had safe working conditions.

These days, however, those protections are covered under state and federal labor laws that didn’t exist when unions were needed.

Union membership is steadily declining, too.

There are many reasons for the drop in membership, but modern labor laws are one factor. That, and most (but certainly not all) businesses understand they have to treat employees decently in order to retain them.

As a GM at Whole Foods for many years, I hired probably hundreds, if not thousands, of former union grocery workers from other stores.

I’d estimate that over 90% were very happy to be working non-union, and overall felt they had a better work environment, pay, and benefits.

As far as cost to the consumer, it doesn’t really have any effect.

So in the big picture, being unionized doesn’t really matter. Unions played an important role in protecting workers, especially in the early to mid-1900s. But in many regards, the protections they offer are no longer worth the dues to workers.

I’m sure there are exceptions, especially in other industries, but that’s how I see it in this day and age.

Did I cover all you wanted to know about Kroger vs. Walmart?

Kroger and Walmart are two of the largest supermarkets in the United States.

In this article, I compared prices between Kroger and Walmart. We learned how Walmart is bigger than Kroger in size and sales. Besides, Walmart has limited variety, but better prices. On the other hand, Kroger has a better quality of fresh foods, more variety of processed foods, but higher prices.

I also talked about whether Kroger and Walmart are unionized and whether it makes a difference to you, the consumer.

So, which supermarket do you prefer?

No matter which you prefer, skip the lines and hassles, and order from Walmart or Kroger through Instacart.

Just CLICK HERE to learn more and get your groceries on their way!

Kroger Cahokia, IL 5 by Mike Kalasnik and Walmart by Mike Mozart are licensed under CC2.0

The sight and aroma of a freshly grilled steak can automatically activate one’s taste buds. But now and then, you happen on a tough one that’s chewy and not very appetizing. It makes you wonder...