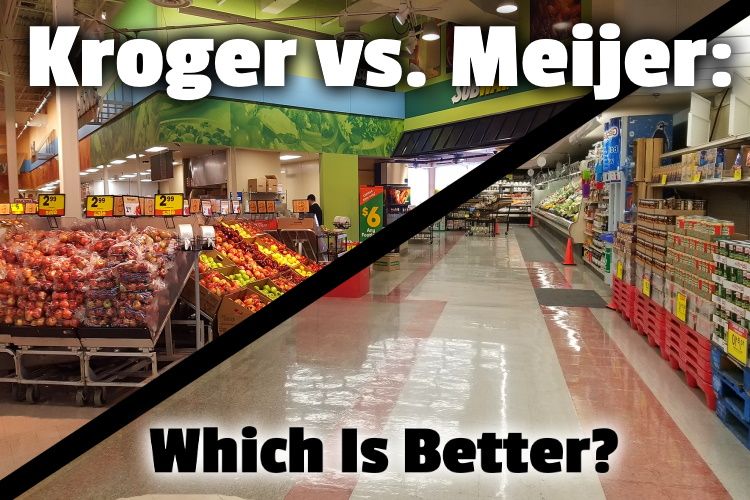 As a Kroger shopper, I know that I am paying a little bit more for my groceries. But I’ve been hearing a lot about Meijer, too. So it got me wondering which is better, Kroger vs. Meijer?

I decided to do some research, and here’s what I found out:

Kroger has 10 times as many stores as Meijer, and while Meijer’s prices are excellent, and they have great produce, Kroger is the better choice for fresh meat and fast checkout lines.

But there’s more to know about which one is the better supermarket.

So in this article, we’re diving in deep on both grocery chains. We’ll look at how many locations each has, what states those are in, and why you might want to shop at one over the other.

Who is cheaper: Kroger or Meijer?

Generally, Kroger is cheaper than Meijer. This is primarily due to the increased purchasing power Kroger has with purchasing for well over 2,000 stores compared to the 240 stores Meijer currently has.

Meijer is also more like a Walmart than a grocery store.

So while they sell groceries, but they also sell everything else you could want. They sell clothes, have an automotive department, home goods, and outdoor stuff.

They are the one-stop-shop of the Midwest.

Kroger is just a supermarket. They are going to have a wider variety of brands on their groceries. But they don’t sell things like clothes or outdoor items.

While Meijer may be cheaper on a few select items, Kroger wins overall as being the most affordable of the two stores.

Whole Foods is more expensive than both of them.

But there are some things that are worth the higher price. One of those things is chicken, both fresh and rotesserie. For ingredient and additive quality standards and animal welfare policies, no grocery chain beats Whole Foods.

To read more about which grocery chain has the best chicken and what makes chicken the best, check out this recent article.

Does Kroger own Meijer?

No. Kroger does not own Meijer. Meijer is one of the largest privately-owned grocery chains in America. Kroger, by comparison, is the largest grocery chain in the US and the 2nd largest retailer aside from Walmart.

Meijer is based out of Grand Rapids, MI, and operates more than 240 supercenters and grocery stores in:

Founded in 1934, Meijer is credited with pioneering the modern supercenter concept in 1962.

According to Forbes, Meijer is one of the largest privately-owned companies in America. And even though they have less than 300 regional stores, they were the 26th largest retailer in the United States in 2015. source

Kroger is based out of Cincinnati, OH, and has more than 2,800 stores across the United States. They are the second-largest supermarket, only behind Walmart.

But it’s understandable that someone would think that Kroger owns Meijer. That’s because Kroger does own a lot of other stores, one of them being Fred Meyer.

In fact, they have more than a dozen stores under that name. Most of them are grocery stores, but they also have standalone pharmacies, e-commerce, and jewelers. And while Meyer and Meijer are pronounced the same, they are unrelated companies.

Kroger and Meijer are both considered supermarkets.

Americans do most of their shopping in supermarkets, even though we usually call them grocery stores in everyday speech. Grocery stores are typically smaller and more specialized.

Supermarkets are bigger and have a much wider selection.

Is Meijer a good grocery store?

Yes, Meijer is a good grocery store and originator of the supercenter concept, selling groceries and home goods in an average store size of 200,000 square feet. This makes their stores significantly larger than Kroger and Target and somewhat larger than Walmart as well.

Meijer sells a wide variety of groceries alongside other products. They are a staple of the Midwest with more than 240 stores in Michigan, Illinois, Indiana, Kentucky, Ohio, and Wisconsin.

They sell groceries, clothes, and gas. Some stores even have restaurants, barbershops, and nail salons! They have fully functioning pharmacies, which provide free antibiotics and prenatal vitamins.

They have excellent produce. They have a wide selection, so you can find all kinds of unique fruits and veggies.

They also have their own organic line that is affordable and delicious, too. The Meijer Organics brand is certified USDA organic.

It makes everyday organic staples cheaper than their big-name organic counterparts. They also have the Meijer Naturals brand. It’s not certified organic, but every Meijer Naturals product is non-GMO.

So while their brands may not be certified organic, they won’t contain a bunch of ingredients you can’t pronounce.

They are open almost every day of the year, closing on Christmas Eve and reopening the day after Christmas bright and early.

They also have mPerks, the digital discount program that can help you save money on food, produce, meat, and dairy. Because discounts come straight to your phone, you can use coupons without the hassle of actually clipping them.

The best part about Meijer is Sandy. Sandy is the mechanical horse that can be found at every store. It’s only a penny to ride!

Meijer has no plans to close any stores. However, we’re suspending service at our meat counters and deli salads so that our team members can prepare those items for sale in our self-refrigerated cases. Our teams are working hard to ensure customers have the products they need. pic.twitter.com/wSG52P2pIs

Is Kroger produce better than Meijer?

Both Kroger and Meijer have high-quality fresh produce. However, while Meijer produce departments look more like a farmers market, Kroger is better for sourcing from small local farms.

Meijer has excellent produce. Meijer has a very wide selection, and you can find all kinds of unique types of fruits and veggies, including a large organic selection.

The produce selection from local sources during in-season times can feel just like a farmers market. In fact, sometimes, it can even be priced similarly, too. Oftentimes, even less than the local farmers market.

It’s a win-win situation. You can still support your local farmers but at less of a hit to your wallet.

In the wintertime in the Midwest, aside from greens and squash, there isn’t anything grown or offered as far as local produce goes. But Meijer consistently has a wide selection of produce to choose from. It may not be local, but it will be fresh and delicious.

Some produce like grapes and carrots can be cheaper at Kroger.

But things like apples, spinach, and bananas are cheaper at Meijer or even Costco. And the organic selection is going to be more expensive at Kroger.

But this doesn’t mean Kroger doesn’t have good produce.

In fact, Kroger is one of the largest organic-food sellers in the country. They sell more seasonal products and work with startups to make their produce last longer.

They are continually working on expanding their produce department. They know that shoppers will purchase groceries where the produce is the freshest. source

So whether you purchase your produce from Meijer or Kroger, you can’t go wrong. Both stores know how important it is to have an abundance of fresh produce.

Does Meijer have good meat & how does it compare to Kroger?

Meat sold at Meijer has excellent quality overall, but Kroger also has high-quality fresh meat. However, while all Meijer stores have 3-4 in-house butchers, not all Kroger locations feature the ability to have meat cut to order.

But they have both organic and traditional cuts, and their meat sales often beat out Aldi and Walmart’s prices.

Another factor in the quality of meat is whether the cow is given growth hormones or antibiotics. Animals fed right and treated humanely are not just for marketing. They make better tasting, healthier meat.

Meat sold at Whole Foods has over 100 animal welfare standards it must meet before it is sold in the stores.

Did I cover all you wanted to know about Kroger vs. Meijer?

Kroger and Meijer are both popular, separately owned stores in the Midwest.

Meijer has an excellent selection of not just groceries but other items like clothes and electronics.

Kroger has more standard groceries and better meat than Meijer. Their prices are generally higher.

They are both great grocery stores for their own reasons. If you like the variety of items and prefer more of a one-stop shopping experience, Meijer is for you. But if you prefer to shop for just groceries, Kroger is going to be the better fit.

link to Types of Wine Chart (Sweetness, Body, and Flavor)

Drinking a glass of wine is one of life’s most refreshing pleasures. But picking up the right bottle of wine can be daunting. So here’s an easy-to-understand types of wine chart. And we’ll...

Continue Reading
link to How Can You Tell if a Steak is Bad or Spoiled?

There’s nothing like a great steak perfectly cooked. But sometimes we buy meat 1 or more days ahead of time. And occasionally, it may look darker or have an off smell when we go to cook it. So, how...