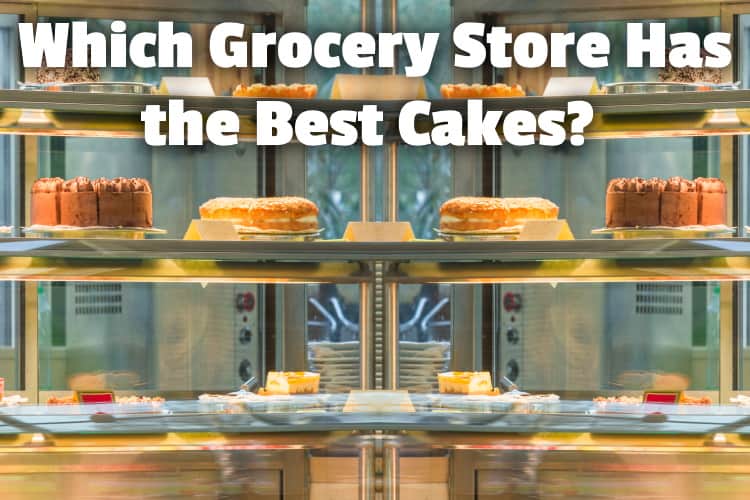 Almost every person on the planet has to get a cake from the grocery store, at least a few times a year. But with so many options, I started to wonder which grocery store has the best cakes.

Here’s what I discovered on my tasting journey:

Which grocery store has the best cakes? For a child’s 1st birthday, the free smash cake option at Walmart is great. Costco is great for large gatherings & small budgets. Target has a lot of character-licensed cakes that are perfect for ages 5-10. But Whole Foods Market wins for overall quality, flavor & ingredients.

But that’s just a quick snapshot. Some people only care about flavor or texture. Others want a vegan cake, or a cake that’s non-GMO, or even all organic.

So “best” can be a little subjective.

Birthdays, Bah Mitzvahs, graduations, weddings. What do all of these celebrations have in common? It’s sweet, it’s moist, and it’s delicious.

But sometimes, especially if you are in charge of planning the celebration, you might not have time to make a cake. You still want your celebration to be special, though and there are some grocery stores out there that make an excellent cake.

So which supermarket has the best cake? Just keep reading to find out!

It’s time to share this classic Cake Wrecks’ grocery store cakes gone wrong photo.
One must be very careful while writing on cakes that are intended to be enjoyed at a Super Bowl party.
😳🥴 pic.twitter.com/xBqvKGIsJo

Which supermarket does the best birthday cakes?

While we all know that homemade cake is the best, sometimes it’s just not feasible.

But again, “best” is subjective and it depends on who the cake is for.

As we’ll get more into below, a child’s first birthday is about the parents having fun; not the quality of the cake. For that, Walmart wins as they’ll give you a smash cake for free if you’re spending at least $15 bucks.

Target wins for kids ages 5-10 as they do a lot of licensed character cakes (who doesn’t want to hear a bunch of kids screaming “Let it Go”?). But not all locations have a bakery.

For a very large group (say a work party), it’s hard to beat Costco for the size and price.

But if what you’re wanting is a really high-quality cake made from quality ingredients, it’s almost impossible to beat Whole Foods Market.

If you are planning a kids’ birthday party, Walmart is definitely the one-stop-shop.

You can purchase your presents, party supplies, decorations, and yes, even your cake at Walmart.

But how good are their cakes? “Good” is really subjective, but for clarity, I’m assuming we can agree that moist cakes are better than dry cakes. Let’s also assume that frosting that hurts your teeth is too sweet.

Walmart does not have a terribly wide selection of cake flavors. The following are available at most stores:

Most enormous slices of cake at this grocery store pic.twitter.com/z9LsDu1CUw

I found several reviews of Walmart cakes that have similar themes. Reviewers say they do not have a wide selection of cakes, and they sometimes don’t look like they are supposed to. (source)

Generally speaking, I find the frosting is too sweet, but the cake itself is moist and tasty. As an added bonus, Walmart’s cakes are very affordable. Just like pretty much everything else at Walmart.

So if you aren’t looking for anything fancy, and just want inexpensive cake, Walmart is probably a good option.

If this is your child’s first birthday, they’ll even give you a free “smash” cake with a cake purchase of at least $15.

A smash cake is a cake specifically for the birthday boy or girl to smash and play in without getting their kid germs all over the big cake.

It’s actually pretty fun to watch your new 1-year-old dig into their very own cake! (source)

Does Walmart bake their own cakes?

Walmart’s sheet cakes come in frozen from Pillsbury. Their round cakes come from Best Brands based in Minnesota. (source)

They’ll also do their best to customize it how you want it, and they’ll write pretty much anything on it, as long as it’s not offensive.

But don’t get too fancy. Walmart is all about cheap products and low labor costs. You’re not likely going to find a talented cake decorator on staff.

What kind of cakes does Costco have?

Costco only has two flavors of cake – white or chocolate. The white cake comes with a cheesecake mousse filling. The chocolate cake is filled with chocolate mousse.

They have very few options when it comes to decorations. They have several floral selections, a few sports themes, and a few generic kids’ themes.

Of course, they’ll write on it for you, too.

The thing to keep in mind, though, is value. Costco cakes are huge and very affordable. At less than $20, their half sheet cake weighs a whopping nine and a half pounds and serves 48 people! (source)

In fact, in this recent article, Costco won out for best rotisserie chickens, based on price and flavor.

There I talk about not only who has the best chicken, but the best brands of chicken to purchase, too. And if additives, hormones, and antibiotics are important for you too, I factor that in also in the rankings.

Thanks for the birthday wishes everyone! pic.twitter.com/qaJKScv4y4

The light mousse frosting on Costco cakes won’t end in a stomach ache after one or even two pieces.

So Costco fares pretty well in that area too. But like Walmart, it doesn’t work for me personally due to the low ingredient standards.

Most of Costco’s cakes are from the company David’s.

Among other ingredients, you’ll likely find:

Call me crazy, but I just don’t think all of that stuff (and some of the other dozens of ingredients) are necessary for a good cake.

I’m not going to get into the health concerns over some of that, but you can check out the following published studies for further info:

Target does a lot of things really well.

They seem to have this spell on people that somehow encourages people to spend more money than they intended.

Not all Targets sell cakes, but the ones that do are generally well-received. Target has a lot of options when it comes to flavor combinations. they can make customized cakes to fit in with your celebration theme, too.

Admittedly, when my 2 older daughters were younger, they loved walking by the Target bakery case and looking at all the cakes.

But this was all based on appearance. Target uses a lot of what I could call props (plastic decorations) to enhance the appearance of their cakes. They also do a lot of character licensing. By that I mean they pay companies like Disney to be able to use an official picture of Elsa on a cake, etc.

But they do also have more normal cakes too.

It’s not right for me since they have the same ingredient issues that Costco & Walmart. But like with those cakes, you are likely to find the texture and flavor good. And if you’re planning a themed kid’s birthday party, I would opt for Target over the others too.

Just make sure your Target has a bakery as not all Target stores do.

Does Whole Foods have good cakes?

Whole Foods has delicious cakes. And I say that with some bias since I worked there for more than 20 years.

It’s “Bettercreme,” which is made of chemicals. Yuck. Bettercreme is a whipped, dairy-free topping that tastes like sweet cool whip.

Whole Foods has a policy not to sell items with artificial sweaters in any of the products sold in their aisles. This is a good thing.

Whole Foods has a ton of options when it comes to cakes. They even have vegan options!

All of their cakes can be decorated and customized to your liking. The best part is that they have a distinctly homemade taste and are relatively reasonably priced.

Every Whole Foods Market location has a “real” bakery with bakers and cake decorators on staff (or at least that was the case when I worked there which was up through 2013).

If your celebration includes grilling, you should definitely get steaks from Whole Foods, too.

Whole Foods won’t sell meat that has been treated with antibiotics, has added growth hormones, or animal by-products. They also ensure that animals are raised, transported, and slaughtered humanely.

To read more about where to purchase the best steaks, read this recent article.

@holliesmiles Heres a hamburger cake Whole Foods Market makes in their bakery! Gave to my son a few years back. pic.twitter.com/NdfrGUVvDs

Whole Foods prides itself on excellent customer service. Cakes are no exception.

As I mentioned, they have bakers and cake decorators on staff and can make just about anything. Want a red velvet cake (with no artificial color, but still red)? They got you covered!

To order your cake, just call your store to order or visit the store. Many stores offer online ordering as well.

They also offer catering. If you don’t want just one cake, but maybe you want a tray of sweet things, cheese, or other party platters, they’ll bring it to you!

If you aren’t sure what you want, many Whole Foods have an in-store concierge to answer all of your event-related questions.

Did I answer everything you wanted to know about what grocery store has the best cakes?

There really are some amazing options for cakes for celebrations in a range of sizes.

Your son’s first birthday may be great with a cake from Walmart and a matching smash cake. If you want something a little more grown-up, or a little more sophisticated, Whole Foods is your best bet.

And if you like to avoid artificial ingredients and preservatives as I do, Whole Foods (and other similar stores) is most certainly the way to go.

What are you celebrating?

link to Which Grocery Store Has the Best Chicken? (Rotisserie too!)

Chicken. It’s lean, healthy, and versatile. Millions of people eat it every day. It’s sold in grocery stores all over the world. But which grocery store has the best chicken? Here's what I...

Lots of people love steak. But let's face it, not all meat is created equal. So many steak lovers have wondered which grocery store has the best steaks? Having sold thousands of steaks over the...