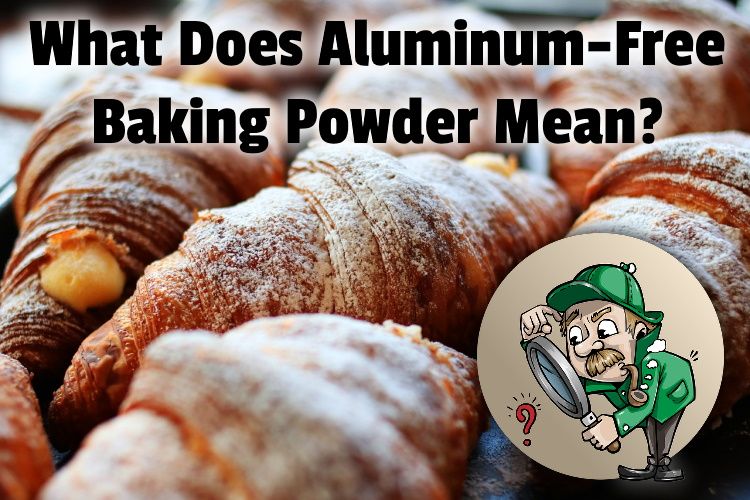 Aluminum-free baking powder is simply baking powder that does not contain aluminum as one of its ingredients. Aluminum is used in baking powder to make it heat-activated; an effect triggered once the dough comes in contact with heat and not from moisture, which is how non-aluminum baking powders work.

But the above is the tip of the iceberg.

But we’ll also look at why some people don’t want aluminum in their baking powder.

I just found “aluminum-free” baking powder from 2013. Is that normal for that era or a premium upgrade?

Did we pay extra to not bake metal into our food? pic.twitter.com/T3ZVfD129N

The reality is that regular baking powder (with aluminum) leaves a bitter, metallic taste. A taste that’s obviously off-putting.

To understand the difference, it’s important to understand what baking powder is made up of. It’s a mix of baking soda, acid (cream of tartar), and cornstarch.

Aluminum-free baking powders react with liquid. As such, they are referred to as fast-acting.

To understand the difference further, check out a recent article where I spoke about whether all brands of baking powder are aluminum-free.

Regular baking powder with aluminum, on the other hand, is slow-acting.

They react with heat. You don’t need to hurry, seeing as most of their action is delayed until the batter is in the oven. This speaks to the fact that aluminum-free baking powders are a tad delicate.

This is because if you take too long between mixing the dough and putting it in the oven, the intended chemical reaction may have occurred and even petered out, and you may not get as good a rise as you’d like.

Now, of course, the FDA reveals that unless aluminum is consumed in significant quantities, it does not pose any health risk. But we’re also talking about the same regulatory government agency that once said cigarettes were not dangerous. (source)

But that being said, there are also MANY studies that show links between aluminum and health issues such as Alzheimer’s.

You can see just a few of those many studies here:

And it’s also worth mentioning that other studies like this one have found that aluminum has been “shown to cause encephalopathy, anemia, and bone disease in dialyzed patients.”

But there are other studies that oppose these views, so the facts are far from clear.

Now let’s look at some of the best-known brands and see which ones are aluminum-free:

Yes, Kraft magic baking powder is aluminum-free. It’s a double-acting baking powder which means that it will react and create gas bubbles twice, once when it is added to liquid and when it is exposed to heat.

It is fast-rising and does not contain sugar.

It’s the gas that makes your cakes rise. It’s imported from Canada.

Yes, Fleischmann’s Baking Powder is aluminum-free. It’s a double-acting baking powder which means that it will react and create gas bubbles twice, once when it is added to liquid and when it is exposed to heat.

It is fast-rising and vegan-friendly, kosher, and does not contain sugar. It contains sodium bicarbonate and is imported from Canada.

i just told my mom i need laura mercier baking powder and she goes oh why arm and hammer is so much better….sos pic.twitter.com/jqKLtrKNa4

Arm and Hammer only make baking soda and not baking powder, and their baking soda is aluminum-free.

Baking powder or baking soda? It can be confusing, right?

Both are used for the same purpose, to increase the volume and lighten the texture of your baked goods. They are leavening agents.

But a one-to-one substitution is not always feasible. It’s very easy to confuse both agents. After all, they are both white and in powder form and have similar-sounding names. Let’s find out a bit more about both agents.

It’s a white crystalline powder that is naturally base or alkaline. It becomes activated when combined with an acidic ingredient and a liquid. And when it’s activated, it releases carbon dioxide, which makes baked goods fluffy and light.

Baking powder, on the other hand, is a complete leavening agent in that it contains sodium bicarbonate and an acidic ingredient. It also contains cornstarch which is meant to prevent the base and the acid from activating while they are still being stored.

When in contact with liquid, the acid reacts with sodium bicarbonate to produce carbon dioxide, which causes the baked goods to rise. There are single-acting and double-acting baking powders.

The former is for food manufacturers and not for household use. So, double-acting baking powders are the type of baking powder you would use.

But what does double-acting mean?

It means that the baking powder would react and create gas bubbles twice: once when it’s added to liquid and again when it’s exposed to heat.

I’ve never had a soda bread poof up like this. That Bob’s Red Mill baking soda must be some powerful stuff. pic.twitter.com/09u0N3os6v

Baking soda, as made by Bob’s Red Mill and other companies, does not contain aluminum. It’s pure baking soda made from mineralized sodium bicarbonate. It’s extracted using a water process that does not involve chemicals.

It is produced in the company’s gluten-free facility, where it is subjected to testing to ensure its purity.

If combined with acidic products such as molasses, cocoa, buttermilk, or yogurt, it can be used as a leavening agent. This triggers the release of carbon dioxide and causes batter or dough to rise. It can also be used as an odor absorber or household cleanser.

You can even use it for brushing your teeth.

FYI I just checked and it appears baking powder contains aluminum ions. So is it the basic nature of the baking powder, the aluminum ions in it, or both that causes the color change with pancakes? 🤔 pic.twitter.com/6zpVnZziNR

But Edmonds is a New Zealand brand and the labeling laws are different there than in the US where I’m from.

Edmonds baking powder is gluten-free and provides a double-raising action — that’s to say, it activates as soon as you add moisture to it, and this is sustained in the early cooking.

It appears that we may have found some NKC baking soda – NOT Kosher-Certified (thanks to follower input)! It’s Baker’s Corner – an Aldi product. We could not find any clear kosher seal nor did it pop up as kosher-certified in our normal QA databases. https://t.co/RSyIIEp0wV 🐷 pic.twitter.com/DSlqGRFyOT

Does Baker’s Corner baking soda have aluminum in it?

All baking soda, including the Baker’s Corner brand, does not contain aluminum in it.

Many baking powders, on the other hand, contain aluminum.

Baker’s Corner baking soda, like other baking sodas, is 100% pure sodium bicarbonate. It’s great for baking, for use as an odor absorber, for household cleaners, and for use as a DIY teeth-cleaning agent.

When I see “Argo” baking powder I think man…the CIA really built a great cover to get those hostages out of Iran pic.twitter.com/bXiIVTH2Y9

Yes, Argo Baking Powder is aluminum-free. It’s a double-acting baking powder which means that it will react and create gas bubbles twice, once when it is added to liquid and when it is exposed to heat.

It is fast-rising and kosher.

It does not contain sugar. Its ingredients are sodium acid pyrophosphate, sodium bicarbonate, corn starch, and monocalcium phosphate.

How do you easily navigate the different sections of a grocery store?

link to Are All Brands of Baking Powder Aluminum-free?

It has been an ongoing debate on whether aluminum is harmful or not, and baking powder is one ingredient that sometimes contains aluminum. The good news is that some brands of baking powder are...

Continue Reading
link to Is Sprouts Better Than Whole Foods? (No. Here's why)

If you’re a Whole Foods shopper, you probably love natural, healthy foods. But you also know that they can be a bit pricey. You’ve heard about Sprouts and have heard that they may be cheaper. So...