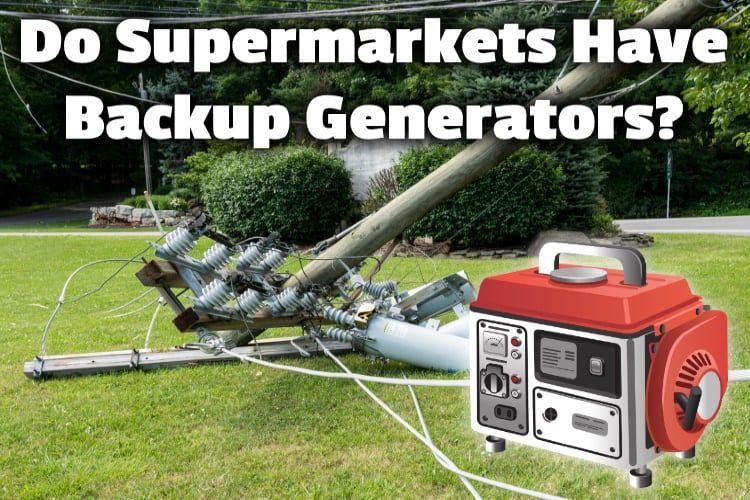 Having worked for 2 decades in that industry, here’s what I know:

Most larger supermarkets and grocery stores have backup generators to operate basic systems, cash registers & emergency lighting. They are usually not capable of running large refrigeration equipment. In most cases, the low risk of long-term power outages outweighs the high cost of a large generator.

But it’s not quite that simple. Grocery stores use a LOT of power, and a generator large enough to power the whole store indefinitely would be HUGE!

I answer all of those questions and more in this article. Just keep reading to find out!

Power outage at grocery store, on backup generator. Normally not a big deal, but does feel a bit surreal today… pic.twitter.com/USoHPqJMSF

What do grocery stores do when the power goes out?

Selling groceries is a low-profit margin business, and backup generators are very costly to purchase initially and to maintain.

Luckily, power outages are relatively rare. And when they do happen, it is for short amounts of time. If the time is short enough, they don’t have to worry about waste.

However, if the power is out for longer periods of time, like 30 minutes or more, most stores have procedures in place. These procedures not only deal with product waste but customer safety as well.

If the store has a generator, it’s likely to provide just enough power to ensure the emergency lighting, cash registers, and computer servers are working. Cash registers also often have battery backups at each station too.

The store employees will most likely start ushering the customers out of the store and use caution tape to ensure that the freezer and cooler doors aren’t opened. Open refrigerated cases typically have pull-down vinyl curtains that can be closed to help keep the cold inside the case.

Prepared hot food items will be thrown out once they can no longer be kept at a safe temperature.

Grocery stores hate throwing away merchandise. They have very low-profit margins. However, to keep customers safe, they will throw it out. Nobody wants sick customers just because the power went out.

Just how little do grocery stores typically make in profit? Head over to this recent article to find out. Many only make 1-2% net profit which makes them one of the least profitable businesses.

But don’t feel sorry for Target or Walmart. In this article, I also uncover some of the tricks used to maximize their profits and get you to buy more.

Can a business stay open without power?

They can, but not for very long.

If you’ve ever been in a grocery store with the lights turned off, you know it gets very very dark.

It can be very dangerous when it’s that dark. Especially for elderly people. People can’t see each other and can’t see merchandise that may be in front of them. If someone runs into an elderly person, they could fall, potentially injuring themselves and the person they run into.

Even with a backup generator powering the cash registers and some lighting, shoppers are encouraged to leave and come back when the power comes back on. Oftentimes, the registers are kept open to get the customers out that were in mid-order at the time of the power outage.

But without power, there’s likely no internet, making it risky to take credit cards as there might be no way to know for sure the card is good.

Again, even backup generators don’t provide power to cold and hot food. This means that if the power is out for too long, that merchandise will have to be thrown out.

And, I’d be remiss if I didn’t mention the theft potential.

When the power goes out, people with buggies full of food can just walk out the door and load up their car. There’s always a certain amount of surprise and chaos when the power goes out. When that happens, initially, store employees aren’t paying attention to customers.

Instead, they are focusing on safety procedures and getting the power back on. Eventually, stores will post someone at the exit to prevent theft, but if there is an opportunity, there is a chance someone will take it.

So, while stores can stay open briefly, it’s in their best interest to close at least temporarily. Not just to prevent product loss, but for the safety of their customers.

Power outage at grocery store leads to thousands of dollars’ worth of food to the needy: https://t.co/yoAuTEceAl pic.twitter.com/rM9W8PcZCf

How long does it take for food to spoil when the power goes out?

Grocery stores will always follow USDA guidelines when it comes to food.

Hot items get thrown out within thirty minutes.

Cold food can be kept cold for several hours if the store has bags of ice on hand. They will either have them in frozen storage in the stockroom as well as in ice displays on the sales floor.

Stores always have refrigerated and frozen walk-in coolers and freezers in the back.

As needed, items can be moved there (quickly as to minimize the number of times doors get opened) to extend their lifespan. Loading products into shopping carts make this process go quickly.

Employees will ice down the cold items like meat, temperature-sensitive produce, fine cheese, and packaged lunch meats. Essentially anything that is not behind closed cooler doors. Just like ice, closed doors can keep cold items cold for several hours.

Cold food can be kept like this for about two to four hours, however, frozen items may have to be thrown out after this point.

Large chain stores may have nearby warehouses with refrigerated and frozen trucks. Those trucks are driven to the store and then the employees move the cold items onto them.  This helps minimize how much has to be thrown away.

But it’s also a lot of work.

When your grocery store doesn’t have generators 😳 pic.twitter.com/zSjFYVakh9

Does a generator produce enough power to run a grocery store?

However, it may take multiple generators, depending on the square footage and exactly what the grocery store wants to power. In most cases, they do NOT produce enough power to run the complex refrigeration systems of a full-sized grocery store.

If you’re interested in geeking out on all of the numbers, check out this GENERATOR SIZING GUIDE by Generac. Generac shows us how much square footage their generators cover and how much power gets produced.

Power outages are pretty infrequent. Infrequent enough that the cost of purchasing, maintaining, and testing generators outweigh the benefit of having it.

If the power goes out for long periods of time, as I mentioned, grocery stores will have refrigerated trucks they can load the cold stuff into.

If all else fails, grocers can take count of the groceries they have to throw out and file a claim with their insurance. They can also write it off as a loss at tax time.

Having a plan in place to deal with power outages is one part of running a successful grocery store.

To read more about how grocery stores are run successfully, read this recent article. I share with you all the best tips I learned in running several of Whole Foods Market’s top stores over a long period of time.

How much power does a grocery store use?

On average, supermarkets in the United States use 50 kilowatt-hours of electricity per square foot, each and every year. That equates to more than $200,000 per year in energy costs for a 50,000 square foot store! (source)

But grocery store owners can do quite a bit to save on energy usage and costs. And a lot is going on behind the scenes that you may not notice.

Grocery store owners and managers may have meetings and energy audits.

These meetings may result in procedures to conserve energy. Things like motion sensors to turn lights on and off, automatic thermostats, and natural lighting can all save money and reduce energy usage.

Having skylights and natural daylight sources, they can reduce lighting during daylight hours. They can adjust thermostats in the evenings and during seasonal changes.

They can also make sure that electrical components are properly maintained. And replacing old, less energy-efficient equipment is also a great way to improve energy costs.

Have you ever noticed the lights are off in the refrigerated section, but they turn on when you get in front of the door? That’s because the store has implemented at least some energy-saving methods.

Because grocery stores have very low profit-margins, saving money on electricity is an important part of keeping costs low.

Did I answer everything you want to know about supermarkets having backup generators?

Most grocery stores do not have backup generators. They are very costly, both in initial cost and maintenance.

While grocery stores can stay open for short periods of time, it’s probably in everyone’s best interest if they close for long power outages.