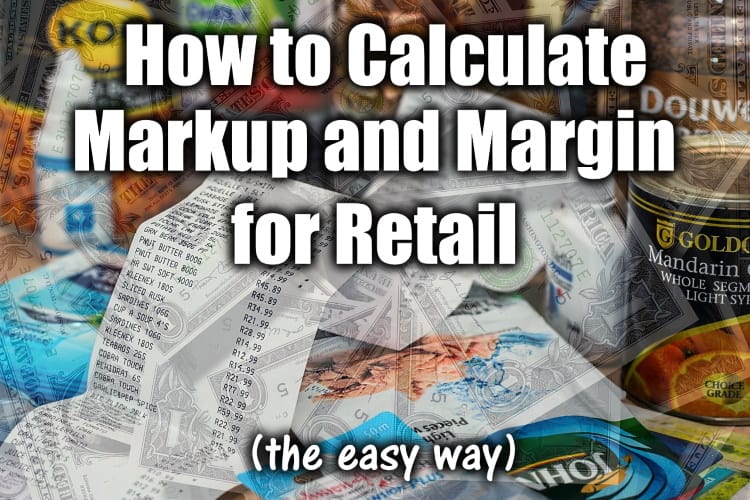 Trying to figure out how much to price a product and how much profit you can make when you sell it is tricky. But after 20+ years in retail grocery, here’s what I’ve learned about how to calculate markup and margin for retail:

But there’s a lot more to know about markups and margin. You’ll want an easy way to calculate both on the fly, and you’ll want to understand both the difference, but also how they relate to each other.

So in this article, we’re taking the mystery out of it. We’re also steering clear of talking like your accountant. That way you can understand in plain English exactly what you need to do; simply and easily.

The products and services that were found to have the highest price markup! #retail #retailers #amazon #ecommerce #sales pic.twitter.com/BAKaRIGfnJ

What is a retail markup?

Let’s say you buy a product from a warehouse for $1.00. That’s called your wholesale cost.

Whatever price you decide to sell it at is called your retail price. How much more your retail price is compared to your cost is considered your markup. Usually, this is shown as a percentage.

So markup, broken down as simply as I can state it, is what percentage of the profit your cost is. If something costs a buck and you sell it for 2 bucks then you have 1 dollar of profit. Since both your cost and your profit are 1 dollar, that’s a 100% markup.

In other words, you simply doubled your cost to come up with your retail sales price.

What is a retail margin?

Margin, while similar and related to markup, is altogether different.

Let me explain. No, there is no time. Let me sum up. (sorry, old guy Princess Bride reference).

Most retailers would LOVE to make a 50% margin, so just know that I used simple numbers to make the math easier.

In many cases in a grocery store or other retail environment, you’re likely not seeing margins that high.

What’s the difference between markup and margin

As I just explained above, markup is what percentage of your cost the profit is.

By comparison, margin is what percentage of the sales price your profit is. So they are related and are all based on the same set of numbers. But they are both different (but important).

Here’s a handy chart to help explain the difference and show some examples:

Some people say “sales cure all”.

What they mean by that is if you can find ways to drive an increase in sales, a lot of your problems go away. Where that saying falls a little short or perhaps is naive, is that you have to be driving those sales on a solid financial foundation of systems for setting, tracking, and monitoring things like sales, costs, and shrink.

Otherwise, you’re likely going to find you grow your problems too.

Did you know the average grocery store has a markup of 15% on their products? Grocery coupons really add up. Even if they are for few bucks off! 🛒 https://t.co/oFc6YaY2wZ #discounts #grocerylist pic.twitter.com/ADp7h3R2lQ

How do you calculate retail markup?

That $1.50 we made on top of our cost is called the gross profit.

It’s called “gross” profit because there are expenses involved in running a store that gets subtracted before you know the bottom line. The bottom line profit, after expenses are deducted is called the net profit (more on that below).

So to calculate the percentage we want to see the profit divided by the cost.

To make it really simple, using our examples, we’ll divide the gross profit ($1.50) by the cost ($1.00). Doing that simple math, we get 1.5%. To look at that math backward, you would simply multiply 1.5 times your cost to figure out what you want to sell the item for.

So if your retail store is pretty consistent, in what you buy and sell and you mostly sell a lot of the same kinds of items, you can decide what markup might make sense for you, and just use that every time you price your items.

Where it gets more complicated is when your store sells a wide variety of items, such as a deli section, fresh meat or seafood, or vitamins.

Those categories typically have very different markups both because stores have to be competitive on price with other stores, but also due to what’s called spoilage. Spoilage is when you buy something and it goes bad before you can sell it. Generally, the more perishable an item (like meat, seafood, produce), the higher the spoilage.

So often the markup takes a certain amount of spoilage into account to ensure the store isn’t losing money.

Golden corral in McAllen off the expresswayis selling these packs at a good price. Grocery shopping without the headache 🙌🏼 pic.twitter.com/zjKgZ1yL9z

How do you calculate the selling price and margin?

As noted author Stephen Covey says, “Begin with the end in mind”.

In other words, let’s figure out how much money we need to keep the store running, and then work backward. A typical large grocery store might want a gross profit of about 40%. But also bear in mind that the higher the sales, the lower the profit percentage can be.

By that I mean if your store sells $80,000 in products each week, and you have 25 employees, you could probably sell $100,000 in 1 week before you have to hire additional people. In other words, there isn’t a 1 to 1 correlation between expenses, sales, and profits.

But if we want a 40% gross margin, that means, as we explained above, the margin is what percentage of the retail price is the profit. If we know our product cost (let’s stick with the $1.00 example) and we know we want the profit to be 40% of the selling price,

So now we know the why behind how to figure out what margin to set prices at. Let’s do the math.

Let’s say we know we want our small grocery store to hit a gross profit margin of 40% (which is not uncommon).

That means we want the cost of the products we are buying to not be more than 60% of what we are selling it for.  So if we know we want to sell a product at $2.00 because that’s what the competitors sell it for, then we know we want our cost to be at or under $1.20.

If you can hit those numbers, your gross margin will be at or better than 40%. But let’s look at it in reverse. Let’s say we know it costs 1 dollar.

Want a different margin? Do the exact same math substituting your target margin where I used the 40.

What’s the difference between gross profit and net profit margin?

Gross profit is simply what you sold something for minus what it costs.

Going back to our 1 dollar example, if we buy for 1 dollar and sell it for 2 bucks, the gross profit is $1.00. Net profit, however, takes other expenses into account. Sometimes people call this “bottom line”.

In other words, if you’re running a small grocery store, you not only have to pay for the product, but you also have other expenses like:

You might think you’re doing great marking something up 25%, but when you get done subtracting all your costs at the end of the month, you might find that your net profit is a negative number.

While we, as retailers don’t want to be greedy and we do want to sell our products at a competitive price, if we can’t keep the doors open, we are ultimately failing not only ourselves but also our employees and the community we serve.

That’s why we have to balance all the needs and come up with a fair price for our products. That’s also why an average grocery store might shoot for a gross margin (gross profit) store-wide, of 40%.

Because once you’re done subtracting all the expenses, you’ll be lucky if that leaves you 6% net profit.

Did I cover everything you wanted to know about how to calculate both margin and markup for retail?

In this article, we took a look at the world of profit margin and retail markup.

We explored how the 2 relate, but also what the difference is and how to calculate each one. We examined how the price you set effects the margin. And we broke it all down in plain English; no accounting degree needed!

Ultimately, we answered the question of how to calculate markup and margin for retail.

Continue Reading
link to Is Owning a Grocery Store Profitable? (Not always Here's why)

As a store manager for years, I someday dreamed of opening my own store. But I always wondered, is owning a grocery store profitable? Here's what I discovered: Conventional grocery stores make...