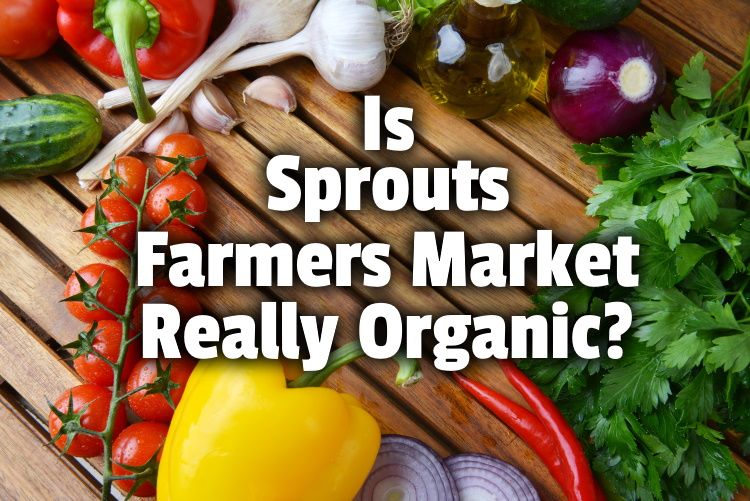 Here’s what I know from my 20+ year career in natural foods:

Sprouts Farmers Market sells many products that are not organically-grown. In fact, unlike their main competitors, they even have some products with artificial colors, flavors, and/or preservatives.

So as you can probably tell, I’m not a big fan of Sprouts.

As I mentioned, they intentionally made the look and feel of their stores mirror what most Whole Foods stores looked like in 1992. But while they do certainly have a lot of all-natural products, and some organically-grown products, their style is more marketing gimmick than a core value.

Look around the store, especially the bulk foods, and you’ll see lots of candies with artificial colors, and other products elsewhere around the store that you wouldn’t ever see at a Whole Foods Market.

It is important to us that we provide healthy and nutritious options for our clients. We could not achieve that goal without our retail partners. In 2018 Sprouts Farmers Market donated 16,845 meals back to their community. Thank you for helping us fight hunger…feed hope pic.twitter.com/KxdtlATZi6

Is Sprouts an organic brand?

No, Sprouts is NOT an organic brand. While their stores and their private label products do have many items that are organically-grown, they also sell a lot of products that are not organic, and even some that aren’t even all-natural.

The company, which operates 340 stores in 22 states, has a mission to encourage people to eat well, even those from low-income backgrounds. Its motto is “healthy food for less.”

And it’s true. You can find lots of fairly healthy products in their stores, some for less than you would find on the shelves at Whole Foods Market.

But they are far from all-organic (granted neither is Whole Foods or most grocery stores). In fact, Sprouts Farmers Market claim that “About 90 percent of the products we carry are natural or organic.” But they don’t break down the percentage between natural and organic.

In my experience in shopping their stores, I tend to see the organic items at the entry to Produce and other departments, as well as rock-bottom prices. Then as you make your way through the departments, I often find most products are not organically-grown.

Well, that’s what I explored in a recent article of mine. I did a detailed comparison of the 2, including which one is actually cheaper (hint: it’s not the one you think).

What kind of store is Sprouts?

Sprouts Farmers Market is a supermarket chain, headquarters in Phoenix, Arizona that focuses mostly on natural and organic foods at lower prices than some of its competitors. They do also sell vitamins, and supplements, beer & wine, and a few products that have artificial ingredients.

A typical store is about 30,000 square feet, and it has a workforce of approximately 35,000 employees. And, it’s on the list of Forbes 100 Most Admired Companies.

It reminds you of how Whole Foods looked like around the early 90s.

Both are into healthy grocery, and they have a similar selection. It’s a publically-owned company that’s traded on the stock market under the ticker SFM. It’s been described as “Whole Foods Lite.”

The CEO explained in an interview that the company had noticed a significant shift towards organic products, grass-fed beef, and specialist chicken. Sprouts’ target markets are innovation seekers and those who are health conscious.

It has its produce section, butcher shop, dairy section, bakery shelves, full-service deli counter, frozen food section, bulk section, health and body care section, vitamin department, and even a beer and wine section. An impressive selection, if you ask me.

On the whole, it’s a good store.

But, the prices are not the lowest in town. Aldi offers the lowest prices, and it’s vital to stress that it’s not true that their products are 100% organic. It has products that, contrary to how it presents itself, still contain artifical colors, flavors, and/or preservatives.

I am not suggesting that they are dishonest, but I do think it’s a little misleading as most people probably assume they don’t sell those things.

Where does Sprouts get their chicken and meat?

Sprouts’ chicken and other meat are sourced from the US and grass-fed beef from Uruguay. It also offers USDA Choice Natural Beef that’s been fed with grain and corn.

Its chicken is described as “farm-fresh,” whatever that means.

Fortunately, they offer an organic alternative but, their pork and lamb are simply described as “natural.” which has no legal definition.

Sprouts offerings in the other parts of its store are impressive, but its chicken and meat are not exactly compelling.

This might lead one to speculate about which grocery store has the best chicken.

But there’s no need for speculations. I took the time to research and write the answer in a recent article of mine. In the article, I looked at the major grocery stores and their offerings, which has the best chicken brand and which grocery store has the best rotisserie chicken.

I also included tips on buying chicken from the grocery stores and if there are chicken brands to avoid. I even shared a nugget about steak and prime.

Does Sprouts only sell organic produce?

Of course, the organically grown items will often be front and center of the store and department.

This can give the impression that everything is organic when that’s just not the case. If you’re preferring organic, you will see a lot, and you may see both organic and non-organic varieties of the same thing.

Not everything not organically grown has a ton of pesticides though. Here’s a handy list of what’s called the Dirty Dozen – the 12 items that are the most sprayed with pesticides. If you have to choose, opt to buy these organic when possible:

You might be wondering if Sprouts have a curbside pickup?

I explored that in a recent article of mine. In the article, I looked at how curbside pickup works at Sprouts, the cost, how to order groceries from the store, whether it’s expensive, and I even mentioned something about getting alcohol delivered to you.

I am at Sprouts Farmers Market do u guys want anything ? pic.twitter.com/CGqwWQw31N

Why is Sprouts so expensive?

So, it’s ultimately a question of either quality or how much of any 1 item they can purchase compared to their competitors.

Specifically, against its biggest competitor, Whole Foods Market, Sprouts has 340 stores compared to Whole Foods 500 stores. And that’s to say nothing of the 20% price drop that happened at Whole Foods when they got bought by Amazon in 2017.

Sprouts, ultimately, just can’t compete with the buying power. As a result, many of their products will be priced higher.

Speaking of the best quality, which store has the best steak?

I also took the time to research and write-up my findings in a recent article of mine. I get into whether USDA prime is worth the money, which supermarket has the best quality meat, and even how to pick the best steak at a grocery store.

In this article, we explored what kind of store Sprouts is.

Specifically, whether it’s really an organic brand, and how much of their products are actually organically grown or all-natural.

In truth, while they do sell some items that are made with artificial ingredients, they do mostly sell natural and organic items. And they place their stores in lower-income areas you’re less likely to find stores like Whole Foods Market, helping them live up to their mission statement.