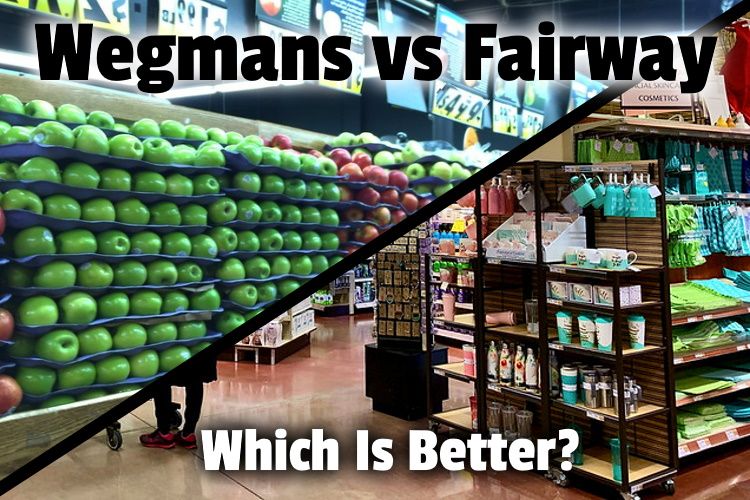 Here’s what I know from comparing the two:

Wegmans and Fairway are hugely competitive with each other on price and quality. Fairway has more affordable pricing while Wegmans have better quality produce and meat. But with Wegmans having over 100 stores, Fairway simply can’t compete following their bankruptcy in 2020.

But that’s just a quick snapshot.

And that doesn’t even go deeply into Fairway’s somewhat recent bankruptcy and restructuring. That led to a number of stores closing, and several being bought by different companies including Amazon.

I’ll let you into more of my extensive research and settle this debate.

Is Fairway Cheaper than Wegmans?

We all know Whole Foods is dubbed “a whole paycheck” for a reason. But that’s changed a lot since they got bought by Amazon in 2017.

They have a cult-like fan base, the friendliest employees, and excellent quality for a reasonable price. But just how much more expensive is Wegmans than Whole Foods?

Here’s my recent article on Whole Foods versus Wegmans. I’ll compare Wegmans to both the cheapest and most expensive grocery stores. This is a must-read!

With over a hundred stores, their own distribution channel, and their own terrific brand, Wegmans seems to be the cheapest of the two.

However, it also depends on what you’re looking for. Let’s take a closer look below.

Fairway is more of a specialty grocery store with a vast selection of produce, meat, and specialty items like Kosher and Halal chicken.

They offer a solution to those hard to find items on your grocery list that are not in a traditional grocery store. Though not as insanely expensive as Whole Foods, Fairways prices are actually not that far from Wegmans.

They are offering things that few other grocery stores will, so of course, it will cost a little extra to shop there.

Fairway is the place to buy gourmet cheeses, organic and natural products, store roasted coffee, and imported products at a reasonable price.

If you prefer national brands, buying them on sale and with a coupon from Fairway will actually save you money compared to Wegmans. Fairway has a much larger selection of national brands.

Wegmans is more of a one-stop-shop. They both have excellent service and products, but I needed to take a more in-depth look at which one is better.

The majority of Wegmans house-brand products are affordable, but it can be costly to purchase national brands.

Staple items such as canned foods and paper products are easily cheaper at Wegmans because most of their items are private label and not national brands.

Meat and produce at Wegmans are of good quality, and they not only own their own distribution but grow most of their produce themselves. This allows them to keep their prices low and remain competitive in the market.

You could overall save a lot more at Wegmans if you sign up for their rewards program, Shoppers Club. You’ll get exclusive member-only deals and points on every purchase.

Does Wegmans have better produce than Fairway?

Both Wegmans and Fairway have excellent produce, sourced from local farms, but Wegmans’ quality is superior. Wegmans also puts a greater emphasis on organically-grown produce.

But let’s take a closer look at the produce quality of both grocers.

Wegmans source their produce from small family-owned farms that are only a few miles from their stores. These farms are certified organic and must follow strict guidelines for their produce.

While Wegmans doesn’t list all 400 partnering farms’ names, there are many mentions of their suppliers. Many of the family-owned farms have been with Wegmans for more than a decade.

Like Wegmans, you can find beautifully arranged produce at Fairway.

They offer a wide selection of both international and locally grown produce. And by wide, I mean at least five different types of chili at any given time. They also have a wide selection of imported exotic fruits and vegetables. Here’s the downside, Fairway’s produce is not among the cheapest in the industry.

Whole Foods and Fairway are both more than traditional grocery stores. Here’s my recent article on Whole Foods versus Fairway. I cover significant comparisons between the two and conclude which is better.

Since its retail debut, the @ImpossibleFoods Burger has remained the #1 packaged item sold at Gelson’s stores and the top single item sold in Fairway’s meat department at two New York City locations. But will this early enthusiasm be sustained? https://t.co/RvTfaWfoQq pic.twitter.com/324Ab9TqDP

Does Fairway have better meat than Wegmans?

So basically, I’m saying both have great meat departments but tend to specialize in different ways.

If you know your meat like I do, you know an “organic” label will not guarantee that you are getting good meat. Wegmans has organic offerings, but the best part is that their cattle are grass-fed. Wegmans’ suppliers grow the majority of their forage, pasturage, corn, and hay.

Grass-fed beef is definitely the best option, and Wegmans offers it at affordable prices.

Wegmans’ sources Humane Association Certified pork from Lowell Sensenig, a 14th generation farmer. Poultry at Wegmans is hormone and antibiotic-free, and they also offer wild caught bluefish, monkfish, tuna, and many others.

Fairway also has some good meat.

They use USDA Prime to make their Dry-Aged Prime steaks. Fairway has great sausages too, which are made from corn-fed pigs.

You should definitely try their ground beef for both burgers and meatloaves! Their beef is only ground once. If you’re looking for specialty cuts like boneless chuck flap tail or those from Kosher meat, then Fairway is the store to shop.

Want to know which grocery store has the best steak?

Here’s my recent article where I compare the meat quality of top grocers. You’ll be surprised what you didn’t know about steaks.

Click that link to read it on my site!

How many stores does Fairway Market have compared to Wegmans?

Fairway, at its peak, had 15 stores. Wegmans has a total of 104 stores. This makes Wegmans almost 600% larger.

Wegmans stores are spread out in the states of New York, New Jersey, and Connecticut.

There are 48 in New York alone. That’s more than twice the stores Fairway operated in the tri-state area. There are 18 in Pennsylvania, 13 in Virginia, 8 in Maryland, 6 in Massachusetts, 2 in North Carolina, and 9 in New Jersey.

I mentioned Fairway only had 15 stores at its “peak”?

What do I mean? Unfortunately, the company has had many financial struggles and a few changes in ownership, leading to bankruptcy.

More on that in the next section.

Fairway Market Files for Bankruptcy After All, Selling Some Stores in $70M Deal https://t.co/hwRJbUdSjp pic.twitter.com/Pr886Ab1Zl

Are all the Fairway stores closing?

Not all Fairway stores are closing. Fairway was sold in 2016 due to financial struggles but then filed Chapter 11 in January of 2020, and different stores were sold to different companies. Some will re-brand, but at least 5 will continue to operate under the Fairway name.

So despite starting in the 1930s, Fairway hasn’t done very well in recent years.

It didn’t help that competitors like Whole Foods and Wegmans moved in next to the New York locations. They were more widespread and had solid reputations of being top grocers.

As I mentioned, Fairway filed for Chapter 11 bankruptcy in January 2020.

Wakefern Food Corporation, the parent company of ShopRite and many others, purchased five of Fairway’s Manhattan stores and the production and distribution center. Amazon purchased two of Fairway’s locations as well. The remaining stores will be auctioned in a court-supervised process.

But if you go to the official Fairway website, it’s run by the Wakefern company.

ShopRite is the world’s largest supermarket cooperative, and it shows no signs of leaving the grocery industry anytime soon.

With a heavy emphasis on promotions, plus low pricing and quality products, ShopRite remains one of the biggest competitors in the grocery industry.

ShopRite, as I mentioned, is also owned by the company that bought 5 of the Fairway stores. But how does ShopRite compare to Wegmans?

My recent article on ShopRite versus Wegmans is a must-read if you want to know which of the grocers is better. I’ll cover which is cheaper, why ShopRite is so insanely popular and who has the best meat.

All that and so much more is revealed, so click that link to read it on my site!

Did I cover all you wanted to know about Wegmans vs. Fairway?

In this article, I covered a comparison with Wegmans and Fairway Market.

You learned that Wegmans is a little more expensive than Fairway, but the prices are reasonable for the great quality they provide. I also talked about their meat selection and produce.

You learned that even though Fairway is a beloved grocery chain, they are actually selling all stores due to bankruptcy.

link to How to Shop at Wegmans and Save Money: 11 Simple Tips

Wegmans is a regional grocery store chain with 103 locations. It has had the reputation of being one of America's best grocery stores for a very long time. But while great, Wegmans isn't cheap. So...

Continue Reading
link to Whole Foods vs. Fairway: Which Is Better?

Fairway Market is known to attract shoppers seeking fresh baked goods, cheeses, and specialty foods. Since the opening of its first store in 1933, it now has a treasured presence in the area of New...