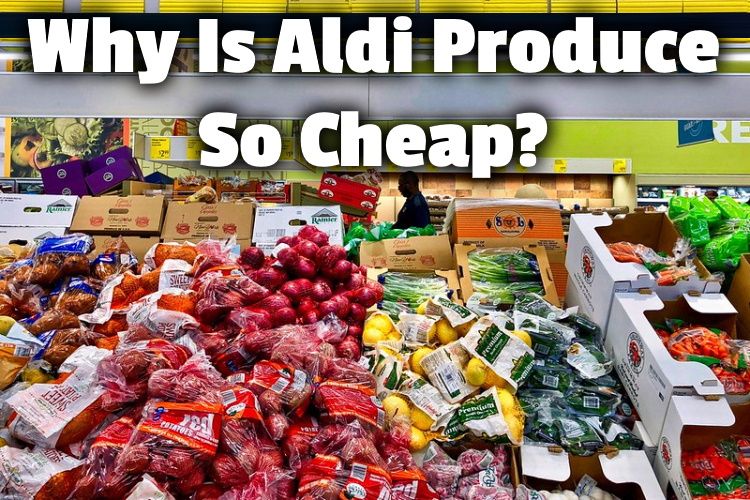 Many love to do their grocery shopping at Aldi, and it’s easy to see why. They have a great selection and amazingly low prices. But anytime we see something that seems too good to be true, it can cause concern. So why is Aldi produce so cheap?

I decided to look into it and here’s what I learned:

Aldi keeps produce prices low by buying locally, saving on transportation costs, and only selling pre-packaged items eliminating the need for scales, and cutting back on needing employees to regularly cull produce for bruised items.

Aldi produce, as with most of their store is designed to be the best price in town.

And there are actually other things they do to keep prices low aside from just eliminating the scales. So in this article, we’ll look at where they get their produce, and other steps they take to keep prices down.

But we’ll also look at whether that compromises quality.

So, let’s get started.

Is produce good at Aldi?

Produce at Aldi is of acceptable quality, and they have a variety of basic produce items available including some organically-grown items. However, freshness is not always at its peak, and because everything is pre-packaged, you cannot buy just 1 of something.

You can buy a variety of fruits at the store.

There are organic ones, too. The problem is that, at times, some of the fruits may not be as fresh as one would like, and you may discover, to your chagrin, that a few days after you’ve bought them, they’re already going bad!

Produce at the store is pre-packaged, and they’re in bulk-sizes, which might not be ideal if you just want a few. The bulk-sized packages are okay for families but not necessarily cool for singles.

But, I am not trying to generalize nor give you a wrong impression.

So, let’s look at some produce you can buy from the store and those you shouldn’t.

Pineapple, mango, kiwi, and their veggies are good, but their bananas, tomatoes, and garlic leave a lot to be desired.

There are times the produce section seems to be a meeting ground for fruit flies!

The key problem seems to be how to keep the produce fresh. Aldi’s produce section is often near the entrance. This could be affecting the produce because the temperature changes, as folks come and go — they have to open the doors.

And interestingly, fruit flies, while maybe common at Aldi, and in many of our homes, isn’t usually a problem in most grocery stores.

And the reason most grocery stores don’t have fruit fly issues blew my mind! I detail the reasons in a recent article. So click the link to read it on my site.

Fortunately, Aldi is addressing the problem, starting with its new stores.

The produce section’s size will be increased, and it’d also be located in a more central part of the store. It’d feature huge refrigeration sections for salad greens and fruits that need cooler temperatures.

If the Aldi store where you shop or intend to shop hasn’t introduced the new changes, I’ll suggest you get produce elsewhere. At least if quality is more important to you than price.

How is Aldi so cheap?

Aldi, like its sister store, Trader Joe’s keeps prices low by operating on a low-expense business model. They primarily sell their own private label items, don’t offer employee discounts and have minimal design and decor in their stores.

Aldi differs from most of the other stores.

It’s known for efficiency, which is reflected in how they manage and operate their stores. The following are some of the differences which enable the chain to offer really low prices.

But let’s expand in greater detail on what I just said above:

1. 95% of what they sell is under their own private label

Virtually all its products are manufactured under its own brand names. So, it can control the costs and pass on the savings to consumers. Contrast this to what happens in most other stores.

They have to buy and stock brand name products, which are almost always more expensive.

2. Their selection is smaller

It doesn’t offer consumers an array of choices, seeing it has its own stock and does not carry many name brands. While other stores often order about 40,000 types of products.

Aldi orders 2000, and because it’s ordering from a limited number of suppliers, it gets huge discounts, which leads to lower prices.

3. They don’t have fancy megastores

Aldi’s stores are a no-frills affair. They’re not about aesthetics; they’re practically functional and minimalist. Naturally, they cost less, and on the whole, contribute to the store’s relatively lower overhead.

The products arrive in the store in shelf-ready packaging, so they go directly to the shelves.

Other stores usually unload theirs first, and then their staff stacks them on the shelves. It’s evident that Aldi has a time and labor advantage here.

5. There are no staff discounts

Some stores offer about 20%-30% discount to their staff.

This affects their cost structure. So, they tend to charge higher prices. But, Aldi doesn’t offer discounts to staff. Its prices are already very cheap.

However, Aldi provides some other benefits to its staff to compensate for the lack of discounts for their own employees.

Shoppers keen to pick up a bargain at the discount food store will be able to visit seven days a week. https://t.co/VbeUA16sUV pic.twitter.com/ibNPbk3DdK

Is produce cheaper at Aldi or Walmart?

Aldi’s produce is cheaper than Walmart’s. Aldi’s overhead is much lower than Walmart’s due to its smaller store size and a much more limited selection, so it can afford to pass the savings to consumers.

Grocery buying is one of those small things that could have a huge impact on your finances when you take a long-term perspective.

This is one of the reasons to comparison-shop. Ultimately you can save a lot of money. Fortunately, for us all, the internet and the availability of some apps have made things easier.

In the preceding subheading, I shared some of the reasons why the store’s prices are one of the lowest in the industry.

So, it follows that it’d be able to offer produce at a low cost, relative to its competitors, right? In a nutshell, Based on my research on produce sold by grocery stores, Aldi almost always becomes cheaper.

Besides knowing which store is cheaper, one other thing you might be interested in is how do grocery stores keep their fruits fresh, right?

I took the time to share the process in a recent article of mine. It has a lot of interesting info that’s only known to folks who work in the industry.

Just click the link to read it on my page.

Stopped in at @AldiUSA today and picked up some items. Love their organic section. #Aldi #aldiusa #organic #fruits pic.twitter.com/t6EEOUCrLm

Yes, Aldi does have low-priced organically-grown produce. Aldi has their own “Simply Nature” organic label, under which it sells a variety of produce.

As with all organic items, these are non-GMO and are also without additives and preservatives.

I thought it’s nice that I also share a list of most of the cheap organic produce you’ll find at the store.

Most people would love cheap produce, so Aldi is a great choice. But I figured some folks might be interested in who produces the best quality and knows that we get what we pay for.

Whole Foods is an excellent choice if you’re not overly concerned about savings.

It’s known by many that you’ll need to spend quite a bit more at Whole Foods. But why? That’s what I took on in a recent article of mine.

In the article, I wrote about how much Whole Foods cost, price comparisons, accusations of overpricing, and whether it’s more expensive than Walmart, Trader Joe’s, or Sprouts.

Is Whole Foods cheaper than Amazon Prime? Is it cheaper now that it’s been bought by Amazon? What is its pricing strategy, and what makes it better or different?

All these are answered by simply clicking the link to read it on my site.

Where is Aldi produce from?

It’s known that some of Aldi’s products are from China.

So that makes people wonder if its produce is from China too, or if they get some supplies from there. First off, it’s natural that we’d like to know where the produce we eat comes from.

It’s a smart and responsible thing to do. After all, there are potential health implications. Luckily, no; Aldi does not get any of their produce from China.

Does it really buy meat from China? You’re in luck because, in a recent article of mine, I gave the low down.

In it, I shared info such as what kind of meat Aldi sells, whether it buys its meat from China, the quality of the meat, why its meat is so cheap, if it sells USDA beef, and there was a video on why grocery stores change their layout. The article is packed full of exciting stuff. Be sure to check it out.

Ultimately, Aldi is never going to have the largest or freshest selection of produce in town.

But then, that was never their goal.

Aldi does, however, have decent produce at rock bottom prices that usually even beat Walmart. And unlike Walmart, you can get in and out quickly.

The biggest downside with their produce is not where it’s from, but rather that it’s all pre-packaged so you can’t just buy 1 of something.

See you in the aisles!