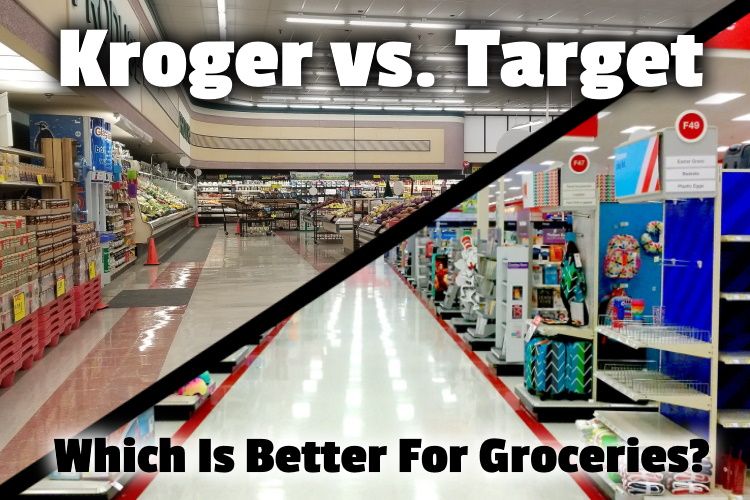 Sometimes you love your grocery store. But sometimes, you aren’t sure if another store is cheaper or better. So today, let’s examine which is better for groceries: Kroger vs. Target.

So I did some research, and here is what I found out:

Kroger is better for groceries compared to Target. Kroger is not always the cheaper choice, but they have the best quality and selection, especially with perishable foods such as Produce, Meat, and Seafood.

But that’s not all there is to know.

After all, some Target locations are better than others while others simply crammed a grocery store off to the side. But Kroger, unlike Target, isn’t in every major city and State. So there’s more to examine.

Starting to understand why my dad did grocery and other shopping early in the morning.

First pick on all the items you need, no lines, and bonuses.

Is Kroger cheaper than Target?

No. Kroger’s groceries are more expensive than Target’s groceries. However, this is mostly true of Target’s canned & boxed goods more than their perishable items such as meat, seafood, and produce.

But as I mentioned above, Kroger’s quality is far superior to Target’s.

They also have a lot more to choose from! Selling groceries simply doesn’t benefit Target. People love Target, but they don’t really have any regular shoppers like traditional grocery stores.

As a result, Target doesn’t focus on its grocery department.

So, shoppers who happen to be at Target already may pick up a gallon of milk. But few shoppers are actually going to seek out Target for their weekly groceries.

The exception would be at what is called Super Targets.

Super Targets (currently only 58 of them), are much larger and many of them were built with a grocery section in mind as opposed to older Targets that remodeled and squeezed a food section in among the clothes.

While you may think that Kroger is a big grocery store because they sell groceries, they are technically a supermarket.

The term supermarket and grocery store are used interchangeably.

Supermarkets have lots of choices, in-house butchers, and fresh seafood.

But grocery stores are usually more focused on a specific category or food or targeted demographic. I get into all the details in this recent article. What really surprised me was which category Walmart falls into.

Is Kroger meat better than Target?

Yes. Kroger’s meat is better than Target’s. Target doesn’t sell as much meat as typical grocery stores. Because they don’t sell a lot of it or have in-house butchers, meat at Target is going to be more expensive and lower quality.

Kroger has great prices on quality meat. They have both organic and traditional cuts, and their meat sales often beat out Aldi and Walmart’s prices.

Another factor in the quality of meat is whether the cow is given growth hormones or antibiotics. Animals fed right and treated humanely are not just for marketing. They make better tasting, healthier meat.

Meat sold at Whole Foods has over 100 animal welfare standards it must meet before selling it in the stores.

But which grocery store has the best steaks?

Check out this recent article to read more about which grocery store has the best steaks. Just click the link to read it on my site.

You can get groceries at #Target as well. #Ottawa pic.twitter.com/Oj3cmTLUj9

Can you buy all your groceries at Target?

Yes. You can get all your groceries at Target, as long as you don’t require any specialty items or need a lot of options. They have all the major categories you would find in any grocery store.

Target has a small produce department, some meat, and most of the staples you’ll need.

Overall, their grocery department is small and does not have a lot of choices. That’s especially true if you are comparing it to other grocery stores. If you want variety, good meat, and a large selection of produce, Kroger will be the better choice.

If you are shopping for chicken, Whole Foods is going to be the best choice.

For ingredient and additive quality standards and animal welfare policies, no grocery chain beats Whole Foods Market. No antibiotics are ever administered in the life of the chicken. They also offer organically grown chickens, which, by definition, are also free-range.

But is the chicken at Whole Foods Market really the best?

There’s so much more to know about chicken and grocery stores than that! Just check out this recent article to learn more. I even get into who has the best rotisserie chickens too.

#CyberpunkisNow: Kroger, the largest grocery chain in the US stepped into the driverless delivery market yesterday. For $5.95, a customer can order their groceries online & have them delivered to their home by the vehicle in the image (which lacks a steering wheel or seats) pic.twitter.com/tjmaiwBYYk

Is Target or Kroger better for delivery?

Target & Kroger are equally great for grocery delivery. Kroger uses Instacart whereas Target uses Shipt who Target purchased in 2017. Both charge a fee of around $10, allow substitutions to be ordered if items are out of stock, and promise delivery at your set time, in some cases within an hour.

When placing an order for delivery, you can have them delivered on the same day. Just pick a time when you want your order delivered to you

One of Target delivery’s nice features is that when they are out of an item, you can choose to have the store text you, automatically choose a substitution for you, or not substitute an item at all.

This is a lot nicer than some other stores, like Walmart, that will just pick a substitution for you. Sometimes Walmart’s substitutions are really off the wall – like the time I ordered Scooby Snacks, and they substituted spicy Cheez-Itz.

Once you have placed your order, Target will deliver your items within the delivery window specified.

Groceries ordered online for delivery from Kroger are delivered via Instacart. You can access Instacart through their website or by downloading the app.

You can input personal information, such as your zip code, to show which stores are available in your area. Instacart doesn’t work for every store; only the select amount shows up on the app or website for your zip code.

In most cases, you can have groceries delivered to you within an hour.

Instacart is also unique because they make sure to get food with the best expiration dates, no damage whatsoever, and the top deals around. You won’t have to worry about receiving cracked eggs or stale chips!

They’ll even properly package and carry flowers and other delicate items.

Ready to place your delivery order with Kroger?

If there’s 1 pic that can fully describe @target‘s produce section, it’s this one. The only lime they had. #sadlime pic.twitter.com/FYgsMUsSFh

Does Target have a produce section?

Yes. Target does have a produce section. However, produce isn’t a focus of Target, so your options are going to be very limited. You won’t find a complete array of products and may just find 1 type of each category of items.

Target sells more staple produce items – like apples, grapes, and bananas. But they don’t have a lot of organic options. They also don’t sell a lot of niche items such as fresh ginger, a variety of peppers, or different types of beets.

Target just doesn’t focus on their produce department. They don’t really focus on their groceries at all.
Target is great at a lot of things. Unfortunately, produce isn’t one of them.

They have a wide selection of fresh, seasonal fruits and vegetables. In fact, Kroger is one of the largest organic-food sellers in the country. They sell more seasonal products and work with startups to make their produce last longer.

They are constantly working on expanding their produce department. They know that shoppers will purchase groceries where the product is the freshest.

So if you just need a few staple produce items, like apples and grapes, Target will get the job done, especially if you are in a hurry or already at Target.

But if you want good, quality produce, you are better off making the trip to Kroger.

Did I cover all you wanted to know about Kroger vs. Target?

Kroger and Target are both popular stores for very different reasons.

Target shoppers love Target. Not really for their groceries, but their everyday retail items.

Most Target stores don’t have a ton of groceries. They mostly have items like clothes, home goods, and electronics. Those are the things they do best.

Kroger has more standard groceries and better meat than Target. Their prices are generally higher.

They are both great stores for their own reasons. If you like the variety of items and prefer more of a one-stop shopping experience, Target is for you. But if you prefer to shop for just groceries, Kroger is going to be the better fit.

Kroger Cahokia, IL 5 by Mike Kalasnik and Target by Mike Mozart are licensed under CC2.0