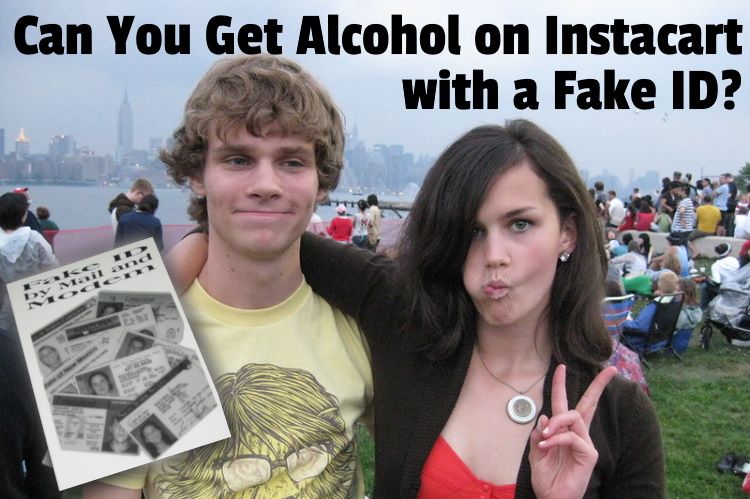 Delivery apps are all the rage and with good reason. From the comfort of your home or office, you can have your favorite food or drinks delivered. But can you get alcohol on Instacart with a fake ID?

It is possible but unlikely, to buy alcohol on Instacart with a fake ID as Instacart Shoppers are supposed to scan the front and back of a government-issued photo ID to verify they are legitimate, and most fake IDs would not pass this test.

Or in some cases, the details would be manually entered by the delivery person.

There are other checks they are required to perform. Some people try to game the system. So, it’s not impossible, but it’s highly unlikely that you would successfully use a fake ID to get alcohol via Instacart.

In this article, we’ll find out if Instacart actually checks IDs and how an Instacart driver would know that an ID is fake. But we’ll also explore if it’s possible for you to use someone else’s ID to get alcohol.

My instacart delivery came and bruh was really like the police when checking my ID 😭 pic.twitter.com/lEP32aNxsx

Yes, Instacart checks IDs to confirm alcohol recipients are at least 21. Instacart takes this step seriously as both the driver and the company Could be liable if they sold alcohol to a minor.

Before physically handing over the alcohol to you, the Instacart delivery person is required to check that you’re indeed the owner of the ID, it’s a valid government-approved ID and has not expired.

So, you have to be present.

You can’t ask them to simply leave it by your door. They also have to check that you’re not intoxicated. So, it’s not enough that you’re present and have a valid ID; you can’t be inebriated. If you are, the delivery person won’t hand over the order.

But can Instacart deliver any kind of alcohol from any place that sells it?

Not to worry, I’ve got you covered in a recent article. In it, I explored whether Instacart delivers alcohol in every state and where from. But I also shared Instacart’s alcohol delivery rules, including the 1 rule that could stop them from delivering to you even if you’re over 21.

Tap below to discover how Instacart and Valora have already done the same. https://t.co/FUeSfIkSjF pic.twitter.com/ZvXkne0Rml

How would an Instacart driver know if it’s a fake ID?

An Instacart driver would know that an ID is fake if it fails to scan. In some cases, the expiration date and the edges may give the ID away. Valid IDs have smooth edges, while fake ones have rougher edges and may be coming apart. Glue lines and bumpy or uneven surfaces are other possible signs.

But if it’s a real ID belonging to someone else, then they might be able to tell just from comparing the photo to your face.

First off, the Shopper is guided by instructions from Instacart. The following are the IDs that are accepted for alcohol deliveries:

But note that Instacart doesn’t accept green cards for orders in California, Washington, Missouri, and Minnesota or for Costco or Walmart orders nationwide.

Instacart Shoppers familiarize themselves with the genuine forms of these IDs so that it’s easier for them to spot fakes.

Why would they do this, you ask?

They could go to jail and pay a hefty fine if they sell to minors or grown-ups who are intoxicated. Delivering alcohol is a big deal!

The Shopper looks at the ID from various angles and sides, and then they feel it in their hands. There’s often something off when one is examining a fake document, ID, or item. It requires a bit of patience, and in a lot of cases, the Shopper can sense that something isn’t right.

The above is a piece of cake if the Shopper has a similar category of ID.

Physical cues are something seasoned Shoppers also rely on when checking an ID they suspect is fake. The customer’s body language can give them away.

The Shopper could check the following:

Lastly, the Shopper could ask some questions.

When a person is lying, at times, their responses become highly inconsistent. A customer who is using a fake ID may not be able to recall all the details on the ID.

So, asking the customer simple questions, such as their date of birth or the expiration date of their ID, may give them away.

happy twenty-fun to me! I made my first alcohol purchase this morning (for someone else via instacart). Cheers! 🍻 pic.twitter.com/mDA1GUGTUl

Can I use someone else’s license for getting alcohol on Instacart?

Unless you can pass for the person in the photo on another person’s ID, it is unlikely that an Instacart driver would accept that ID for delivering alcohol.

But let’s be honest. In most cases, you probably don’t look like the person pictured on someone else’s ID. If you do, and you try it and get caught, you’re also putting yourself and your friend at risk.

You’re probably curious about DoorDash. Can you use it to also get alcohol delivered?

This is what I explored in a recent article of mine. In it, I showed how to order alcohol from DoorDash, and I shared info that shows which one is cheaper: Instacart or DoorDash. But I also revealed if DoorDash would scan your ID for alcohol.

What would Instacart do if you don’t have an ID?

If the recipient for an alcohol purchase from Instacart does not have a photo ID or their ID is expired but they are clearly and visibly over age 35, the Shopper can choose to make the delivery without a valid ID. This applies in all states except New York and California.

And if you’re 65 or older, regardless of state or date of expiration, you can always get alcohol through Instacart.

But in all other cases, Instacart won’t sell alcohol to you if you’re unable to provide a valid and current means of identification.

i lost my fake id u lost the motel key @katyperry waking up in vegas in 4 days 😎 pic.twitter.com/ou3OihrGHb

Which states’ fake IDs are the best?

The states with fake IDs that are the best, according to comments from forums are Connecticut, California, Texas, New Jersey, Delaware, Maine, New Hampshire, Pennsylvania, and Rhode Island.

The United States is a huge country with 50 states.

The fact is that some states’ IDs are not as sophisticated as others — they are easier to fake. The information provided here is drawn from the public domain, and it is in no way meant to encourage the use of fake IDs. It’s strictly for information only.

The following are states whose IDs are also faked a lot. Of course, not as much as the aforementioned.

Now, should you tip Instacart Shoppers?

This is the theme of a recent article where I looked at Instacart, how it works, and it’s delivery fee. I revealed whether the Shoppers could see the tip you’re offering. But I also spoke about whether you can tip in cash.

In the article, we found out if Instacart actually checks IDs and how an Instacart driver would know that an ID is fake.

But we also explored if it’s possible for you to use someone else’s ID to get alcohol. Then, we looked at what Instacart would do if you don’t have an ID.

Lastly, we wrapped things up by looking at which states’ fake IDs are the best.

Fake ID by Mail and Modem by earthlightbooks and Kai and Anika by Nick Gray is licensed under CC2.0 and were cropped, edited, merged, and had a text overlay added.

link to Does DoorDash Deliver Alcohol?

These days, it seems like almost anything can be delivered directly to your house. But recently I saw a restaurant say they could deliver margaritas! So I wondered if they do that on their own, or...

Continue Reading
link to Does Instacart Deliver Cigarettes? (No, but one service does!)

Online grocery delivery has taken the world by storm. Even in the remotest of locations, a lot of things can be ordered from the comfort of one's home. But what about things like cigarettes? Does...