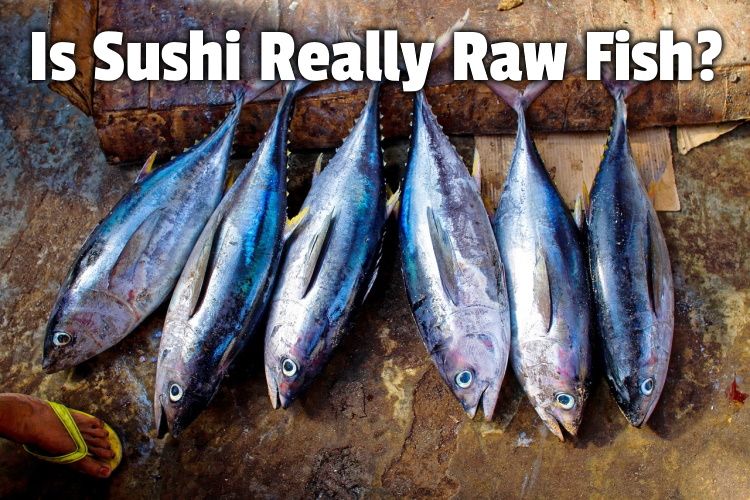 Sushi is one of the Japanese delicacies we all crave now and then. But there are certain things about it that some folks are not really sure about. For instance, is sushi really raw fish?

But there’s a lot more to know, and that’s what we’ll do in this article.

We’ll explore when sushi is made of raw fish and if that raw fish is somehow cured or treated. But we’ll also find out if vegetarian sushi has fish in it or is likely to have come into contact with raw (or cooked) fish.

Why is sushi made of raw fish?

But sushi is not always raw fish.

Sushi evolved hundreds of years ago in Japan as a way to preserve raw fish. In times past, the rice was thrown away while the preserved fish was eaten. It was much later that the rice became a part of the meal.

Raw fish is one of the most popular ingredients because of this tradition. Like most cuisines, sushi has evolved, and there are tons of recipes that do not entail using fish.

But can you make sushi with grocery store fish?

You’re in luck because this is what I explored in a recent article. I addressed the issue of what makes fish sushi-grade and whether one can use any fish to make sushi. I also spoke to whether it’s okay to use store-bought salmon for sushi. And I revealed the most common fish that is used in making sushi.

In most cases, sushi, and specifically the raw fish sometimes used in it, is not cured. Curing is actually a preservation method that was commonly employed in the pre-refrigeration era. The objective was to preserve the fish in a safe and flavorful manner.

So, it is not necessary to cure sushi.

In fact, most fish in sushi is served raw. But curing can affect the flavor positively. And if the fish was caught and flash-frozen according to FDA guidelines and handled in a responsible manner, curing is unnecessary from a food-safety standpoint.

The main thing is to ensure that the fish being used is safe to be eaten raw.

Safe to be eaten raw. That’s the touchstone, and it leads us to an important question: What’s the difference between sushi-grade fish and regular fish?

That’s the theme of a recent article where I explained what kind of fish is sushi-grade and whether it’s cool to use frozen fish for sushi.

I went further to explain if there’s indeed a difference between sushi-grade salmon and regular salmon. But I also revealed if you have to cure salmon for sushi.

Does vegetarian sushi have fish in it?

Vegetarian sushi does not have fish in it. Typically these types of sushi rolls contain vinegar, rice, and seaweed, in addition to vegetables such as cucumber and/or avocado. However, there could be cross-contamination occurring in restaurants that also make sushi with fish.

So if you’re a staunch vegetarian, or want to completely avoid fish, ask your favorite restaurant if they prepare the vegetarian sushi at the same station where regular sushi is made.

And aside from cucumber and avocado, there’s also sushi rice packed into a pouch of marinated, deep-fried tofu.

And there’s Nigiri sushi — vegetables pressed into rectangular blocks of rice. Black rice sushi is another delicious one. It’s made with pickled beet or carrots, jicama, and thinly sliced red or yellow round pepper.

If you’re not a vegetarian, can you eat raw ahi tuna from Trader Joe’s?

Check out a recent article of mine, where I shared some info about whether Trader Joe’s sells sushi-grade fish and if frozen ahi tuna fish is good for sushi.

And I looked at whether ahi tuna fish is the best fish you can get from Trader Joe’s if you’re planning to make your own sushi. But I also revealed if you need sushi-grade tuna for seared tuna.

Yes! Proud to support my industry by enjoying this awesome BC farmed salmon in my sushi tonight. @BCSalmonFarmers @CDNaquaculture pic.twitter.com/D7eHJOhQDq

What kind of salmon is used for sushi?

“Farmed Atlantic Salmon” or “Farmed Alaskan Salmon” are some of the most often used for sushi. The farmed variety is preferred over wild salmon because the latter is susceptible to parasites. Farmed salmon, on the other hand, is raised with feed pellets that are parasites-free.

Salmon used for sushi has been flash-frozen in accordance with FDA guidelines. Wild salmon tastes better, of course, but for sushi, we make an exception as safety has to top taste in this instance.

Interestingly, salmon wasn’t a traditional part of the sushi recipe.

It was introduced to Japan, for sushi, by Norway. Norway was producing a lot, so much so they had excess capacity. Seeing as Japan is a fish-loving nation, a delegation was sent to Japan. And as they say, the rest is history.

And it doesn’t hurt that farmed salmon is almost unlikely to show an incidence of parasitic infection. Sockeye, steelhead, and king salmon are commonly used.

But can you eat salmon raw if you got it from the grocery store?

This is what I explored in a recent article. In it, I looked at whether salmon bought in a grocery store can be eaten raw and what happens if you eat raw salmon. And I looked at whether it’s safe to eat Costco or Walmart salmon raw. But I also revealed if freezing kills parasites in salmon.

OUTBREAK: 13 people sick with Salmonella in 7 states. Ask if your sushi is made with recalled tuna from Jensen Tuna. Do not eat it if you can’t tell where the tuna is from. This includes spicy tuna. https://t.co/wZnK6wnMBh pic.twitter.com/MhRrgCXkcq

What are the chances of getting sick from sushi?

The chance of getting sick from eating the raw fish in sushi is 1 in 2,000,000. However, parasite-related illness from sushi has increased 287% over the last 40 years.

According to the Food and Drug Administration, raw fish can harbor bacteria, viruses, and parasites.

Anisakiasis and Listeria are some of the common diseases associated with eating raw or underdone fish. The former is not common, but a study showed that it’s becoming prevalent in the United States.

But it’s important to remind ourselves, as we learned earlier, that sushi does not necessarily involve raw fish. However, if you suspect that the raw fish in your sushi may not have been handled with the utmost care, it’s wise to be a little concerned.

Seafood processors and sushi chefs are good at spotting and removing these worms before they reach customers in grocery stores. So, one needs to be careful while buying sushi or raw fish to prepare sushi.

But on the whole, the health risks are low for humans.

In the article, we explored why sushi is made of raw fish and whether sushi is cured.

But we also found out if vegetarian sushi has fish. We also considered the kind of salmon that is used for sushi. Lastly, we wrapped things up by finding out the chances of getting sick from sushi.

Image by Kevin Phillips from Pixabay

link to Should I Trust Supermarket Sushi?

Let’s face it. For those of us who love sushi, we can’t always make it to a good sushi restaurant. And we see the big sushi case at the grocery store and wonder, should I trust supermarket...