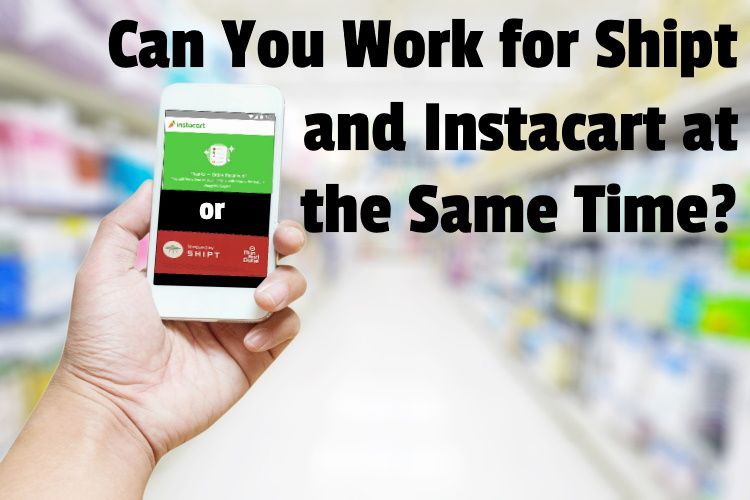 Everyone thinks of Instacart when you think of grocery delivery jobs. But some people prefer to work for Shipt. However, having more than 1 job is often needed these days, so can you work for Shipt and Instacart at the same time?

At the risk of stating the obvious, working for two delivery platforms might just be a great way to increase your income.

And even if you are an actual employee of Instacart, as opposed to an independent contractor, you still can work a 2nd job. After all, Instacart employees, called in-store Shoppers, are part-time. And no company in their right mind would tell a part-time employee they can’t work a 2nd job.

So, let’s cut to the chase…

Ready to get started as a Shopper with Instacart?

Who pays more, Shipt or Instacart?

Shipt pays slightly more than Instacart, averaging $22/hr compared to $17/hr for Instacart. They are both based on the perceived effort of shopping & delivering the order, at an average of $17-$20 per hour on average. Both companies allow Shoppers to keep 100% of their tips.

The bulk of a shoppers’ income comes from tips.

So, even though the rate per hour is not so different, you can probably make more money with Shipt if you make sure all your interactions with customers are awesome.

The longer you stay, the more you also have the opportunity to get multiple orders.

A lot of people appreciate excellent service and seeing as tipping is a part of our culture, you’d do okay if you get a lot of tips.

During holidays and for some heavy packages, Instacart offers extra income, and it’s present in a lot more locations than Shipt.

So, can you make a full-time income from Instacart?

That’s what I explored in a recent article of mine, where I shared the average income and showed that while it’s good to consider it because of flexibility, it’s got its minuses.

Is Shipt considered a direct competitor to Instacart?

Shipt is considered a direct competitor to Instacart because it provides the same service at similar rates. The major advantages Instacart has over Shipt are coverage, size, and sophistication of its app. But if one has access to Shipt in one’s location, the service is as good as Instacart’s.

Instacart is a bigger delivery company that’s owned by Maplebear Inc, while Shipt is owned by Target.

The main advantages Instacart has over Shipt is that it is older, bigger, in more places, and its app offers a smoother experience.

While you’ll find Shipt in 270 cities, you’ll find Instacart in 5,500. The implication is that even if you were to leave the city you’re used to, it’s safe to assume that you’d still be able to use Instacart.

Instacart has partnerships with more grocery stores than Shipt.

Compared to Instacart, Shipt is a small company, but it’s a direct competitor because, in the cities where it operates, it offers the same level of service and comparable rates.

In other words, both delivery platforms are offering the same thing at the same or similar prices. But to put our comparison in context, Shipt is a hummingbird, while Instacart is the Golden Eagle.

To use figures to further illustrate the difference: Shipt was acquired by Target in 2017 for $550 million, while Instacart is currently valued at $39 billion.

It is the largest grocery delivery platform in the nation.

Ready to make more money than with Instacart or Shipt? Consider DoorDash!

I feel like this was @taylorswift13 giving me a tip for a #Shipt order…. TAY IS THAT YOU? 😍 1️⃣3️⃣ pic.twitter.com/7fjQ16Ncoy

Should I work for Instacart or Shipt?

As a general rule, if both are available in a city, Shipt offers more potential earnings than Instacart. However, Instacart currently operates in 5230 more cities than Shipt and is much better known and utilized by customers.

The per delivery rates most delivery platforms offer is not fantastic. Both Shipt and Instacart drivers earn about $15-$20 on average.

Shipt might be a better deal because Shipt’s shoppers get tipped at 15%, while Instacart shoppers have a baseline of 5%. And, since most of your income would come from tips, it might be better to work for Shipt.

But, because Instacart is present in a lot more places than Shipt, you might get more orders on Instacart.

As far as I can tell, there’s no penalty for rejecting orders on Instacart. But, you could be queried if you reject too many orders on Shipt.

How do the rules differ for Instacart employees vs. independent contractors?

Instacart employees are part-time and paid an hourly wage, while independent contractors are paid per job. The latter has the flexibility to accept or reject orders and choose when they work, as opposed to working scheduled shifts. Both are eligible to work a 2nd job.

Instacart employees can work in different roles. It could be in management, customer service, operations, software, or work as in-store shoppers.

Each section would have slightly different rules, but on the whole, employees have predefined tasks and hours they must work each week before they can be paid a salary.

In-store shoppers are employees who work at least 15 to 20 hours per week, which must include a Sunday or Monday.

They do not need cars for their roles. They select and pack groceries in dedicated stores.

Independent contractors, on the other hand, are their “own bosses.” They have no safety net, seeing as they only get paid when they deliver orders. Their payment is a mix of earnings per delivery plus tips. They can deliver as many batches as they can handle.

They do not get any benefits. In fact, they have to bear costs like gas and the repairs and maintenance of the vehicles.

Can Instacart shoppers skip lines if they’re in a rush?

Find out in a recent article of mine. I explained that they could and that some stores even allow them to come in earlier and leave later. They are also provided with dedicated cards for making payments.

How would Shipt know if I take a 2nd job?

There’s no way for Shipt to know if a Shopper takes a 2nd job unless Shipt was called for a job reference. Shoppers are not employees but independent contractors. Therefore, they have the freedom to decide when they work and if they want to take a 2nd job.

It would probably be challenging trying to combine a gig with Shipt with another one, but some people do.

Having said that, if you wore Instacart’s T-shirt to a store where your fellow Shipt shoppers are shopping, the word may get around.

Even though you are a contractor, it’s best not to advertise the fact that you are working for more than one company.

It’s not illegal or anything, but it might make some people question your capacity to do well at your primary gig.

If you were to have some challenges, say at Shipt, they might not be as understanding as they’d be if you were only working for their company.

So, we are back to a simple suggestion I shared at the beginning.

You’ve got to make sure you devise a way to offer excellent service for customers of both platforms. As long as you’re doing that, you’ve got nothing to worry about.

If a person starts doing Instacart, would it affect their unemployment benefits?

That’s the theme of a recent article of mine where I showed that you would have to report your income and that your benefits may be reduced.

Did I cover all you wanted to know about Instacart and whether it’s a good full-time job?

I hope I covered all the info you’d like to know about Instacart, Shipt and how feasible it is to work for both.

We compared both and saw that there wasn’t much difference in the work and the potential earnings. But because Shipt offers higher tips, it could end up paying more.

We compared both as delivery platforms and realized that they essentially offer similar services at similar rates, but in terms of scale, Instacart is huge, while Shipt is small fry.

We also looked into the difference between being an employee or an independent contractor at Instacart. And, we wrapped up by checking out the possibility that Shift could know if you were to take up a second gig.

Ready to get started as a Shopper with Instacart?

Target Same Day Delivery with Shipt by Mike Mozart and Instacart_PwG_anim_02 by 姿穎 呂 are licensed under CC2.0 and Public Domain respectively and were cropped, edited, merged onto a 3rd image, and had a text overlay added.

link to Will Working for Instacart Affect Unemployment Benefits?

The so-called gig-economy is booming, and side hustles are becoming more common. However, if you were let go and are receiving unemployment benefits, it's natural to wonder will working for Instacart...

Continue Reading
link to When Does Instacart Pay Me? (A Contracted Employee's Guide)