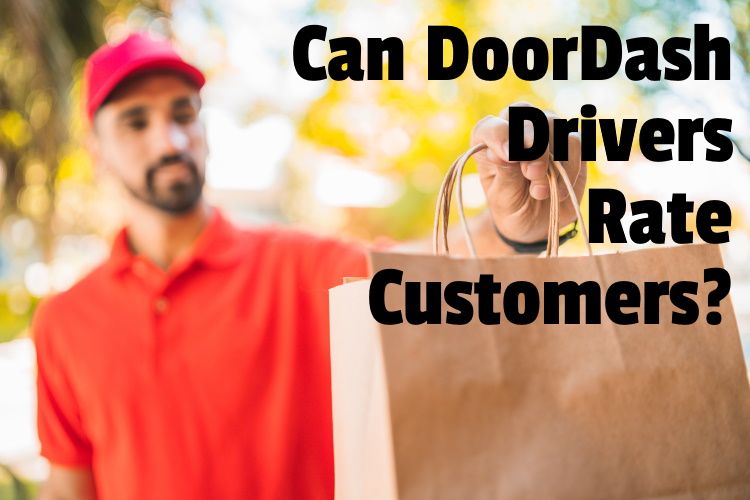 To make the most you can as a DoorDash Dasher, you need high ratings from customers. But while it’s easy for customers to rate drivers, can DoorDash drivers rate customers?

In this article, we’ll explore what a Dasher can do if they get a rude customer, whether they can refuse to deliver if they know the customer is rude, and if they can see tips before deliveries are made.

We’ll also compare Instacart’s customers to DoorDash’s to find out which are nicer. And, we’ll call it a day by considering whether dashers (DoorDash’s drivers) can rate restaurants.

Ready to get started working for DoorDash?

hey can you let customers know that drivers can’t make special requests for food and that it’s rude and wrong to threaten a one star rating for something you should be contacting the restaurant for? Customers shouldn’t be allowed to ruin your rating because of the food. pic.twitter.com/HGySEHOL5I

What can a Dasher do if they get a rude customer?

Dashers are not expected to put up with rude customers. Dashers can choose to not deliver the order, but in most cases, the rudeness would be at the time of delivery, in which case contacting Dasher support after the fact is the best option.

But of course, never retaliate or get into an altercation with a customer. Chances are, that would end your contract with DoorDash.

Having said that, each situation is different. So, the devil is in the details. A Dasher would have to use their good judgment to decide if the rudeness is mild or serious.

If it’s mild, they could go ahead and be professional about the delivery without having to suck up. They could deliver and leave. And let DoorDash support know what happened. It’s possible that it’s not the first time the customer is doing it.

It’s good to still report to customer support that you don’t “feel safe” delivering to the rude customer. Perhaps citing a previous incident.

The vital thing, as I hinted at above, is actually to use your discretion.

At times, it’s okay to simply ignore rudeness. There are cases where a rude person feels embarrassed when they meet someone who’s not retaliating.

Someone who’s showing they’re mature. And, there are times when you’ve got to stick to your guns by not encouraging such behavior. After all, you’re an independent contractor.

@DoorDash_Help just want to report this very rude customer that I feel is threatening me bc at first I thought the restaurant forgot ketchup but then I noticed he actually texted me after I had already left the restaurant. I would have got the ketchup if i got the text earlier pic.twitter.com/SJ4zmMLQNV

Can a Dasher refuse to deliver orders if they know the customer is rude?

Dashers can refuse to deliver DoorDash orders if they know the customer is rude. Dashers decide what orders to accept or what to decline, and they can also cancel orders.

When an order is declined for whatever reason, it would be offered to another dasher. So, the customer would still be served.

The vital thing to note is that Dashers are not employees. They are independent contractors. So, they decide when not to work. Dashers can even have people in the car with them on deliveries. If a customer is rude, they are free to refuse to deliver to them.

Of course, it’s a loss in earnings because they won’t be paid.

But, that’s a cost some people are more than willing to bear. Truth be told, it’s not as if the pay per delivery is fantastic because dashers are using their cars and have to bear the cost of gas and maintenance, and also pay taxes.

A dasher may refuse because they don’t see the point in being insulted on a delivery that’s not offering them big bucks.

I want to say thank you to this kind lady right here. She personally tipped me $10 because I’ve been dealing with extremely rude customers and door dash drivers for weeks now. She saw first hand what I go through and this really means a lot to me😭😭😭😭 pic.twitter.com/xE075ES5ny

Can DoorDash drivers see your tip before the delivery?

DoorDash drivers can see the tip before accepting the order. However, customers can edit the tip later for extra good or less than satisfactory service. So what Dashers see upfront is not necessarily final.

Doordash pays a base pay to drivers.

So, when the amount shown on the app is above the base pay, it’s easy to infer that the difference is the tip if you offered a tip upfront. But, if you don’t, they’ll only see the base pay and naturally won’t know that you plan to offer a tip after delivery.

Of course, you’re free not to disclose the tip you want to pay upfront.

Though that might mean that your order won’t get many takers, as it were. If you’d prefer to indicate and pay the tip later, most Dashers would prefer something a bit substantial and that you pay it in cash. After all, they’re not exactly making money hand over fist.

So tipping beforehand is the way to go if you want your order to be quickly picked up and delivered.

Who pays better: DoorDash or Instacart?

In a recent article of mine, I showed that DoorDash pays better. Their base rate is similar. But, DoorDash’s base rate for tips is higher. And, tips represent about 50% of delivery drivers’ earnings.

After like 8 months i am now over 1500 deliveries for doordash. And i can say i have only had 1 rude customer. pic.twitter.com/PPOx6QYnNT

DoorDash customers would not be any nicer than Instacart customers, given that there is considerable overlap in the customer base between the two. So many customers of one platform also use the other.

A CEO of a top delivery app once described customers as promiscuous. In other words, many customers use several apps, and they are not loyal to one.

The implication is that it is difficult to separate DoorDash’s customers as a distinct group from Instacart’s because the person who used the former to get alcohol, for example, might be the same person using Instacart to order groceries.

And even if it were possible to separate the customers, it’s difficult, in the absence of data, to conclude that one company’s customers are nicer.

Is Instacart and DoorDash the same company?

No. Instacart was founded by a former Amazon employee Apoorva Mehta, while DoorDash was founded by Tony Xu, Andy Fang, and Stanley Tang. Check out a recent article of mine where I share a lot more.

The top most rate rates the dasher. The bottom one rates the restaurant. pic.twitter.com/tiUmWWHXzo

As of the time of writing, Dashers cannot rate restaurants. However, restaurants can rate Dashers. DoorDash has a process for ensuring that Dashers are rated by restaurants — a mechanism for merchant feedback and for improving Dasher professionalism.

If it were considered vital, DoorDash would have instituted a process that also allows Dashers to rate restaurants. But it’s not critical. What’s vital is customer satisfaction.

That’s why DoorDash places a premium on feedback/ratings provided by customers and not by Dashers. Customers can rate Dashers and restaurants, but Dashers can’t rate customers or restaurants.

What about Instacart shoppers? Can they rate customers?

This is the theme of a recent article of mine where I explained that as of the time of writing, Instacart has no official system for shoppers to rate customers. But, they get to choose which orders to accept or decline.

In the article, we checked out whether dashers can rate customers.

We learned that they can refuse orders from rude customers because they are not compelled to accept all orders, and they’re independent contractors.

We found out that Dashers can see the tips if customers show them beforehand, and we learned that it would be difficult to say which company has nicer customers because there’s considerable overlap in their customer base and there’s no data to determine the fact of the matter.

We concluded by finding out if Dashers can rate restaurants.

Ready to get started working for DoorDash?

link to Who Pays More Instacart or DoorDash?

Instacart and DoorDash are two of the most popular food delivery companies. Since it’s natural to want to earn as much as possible, many workers of the so-called GIG economy have wondered who pays...

Continue Reading
link to Are DoorDash and Instacart the Same Company?

There are a couple of companies providing online grocery ordering for pickup or delivery. It can be a bit confusing telling them apart. But a lot of people ask me, are DoorDash and Instacart the same...