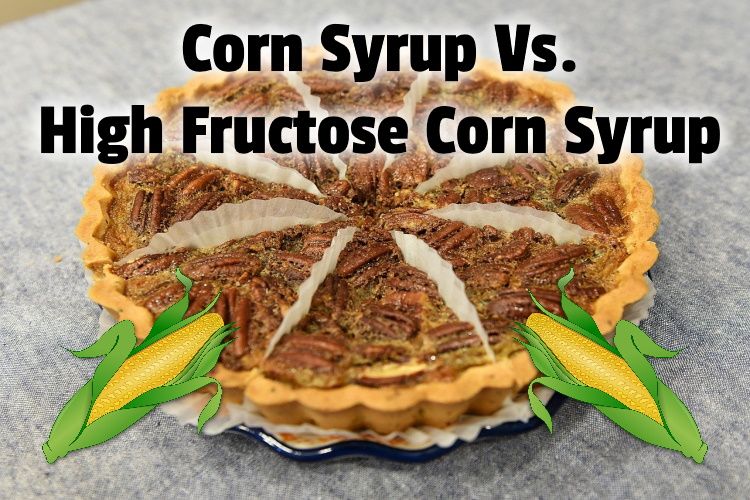 But there’s more to know than just that.

We’ll see how it compares to regular sugar, why food companies use it and what different products are more likely to use one over the other. But we’ll also find out if Karo corn syrup is high fructose or regular.

Is corn syrup as bad as high fructose corn syrup?

So, HFCS is a derivative of corn syrup. However, it undergoes enzyme conversion, making it worse for overall health.

First off, both are different forms of sugar. Now, there are three types of sugar: sucrose (regular table sugar), fructose, and glucose. Glucose is the least sweet of the three and the preferred form that’s easily absorbed by the body.

High fructose corn syrup, on the other hand, is sweeter as it contains pure fructose.

Manufacturers use it as a cost-saving measure because it’s sweeter; as such, one does not need a lot of it. It is made by breaking down the molecules of corn into glucose and then converting them into fructose.

But it’s bad relative to corn syrup because the fructose content, unlike pure glucose, can’t be absorbed directly by the body until it’s converted by the liver. This puts a strain on the liver because of the added work and can lead to liver disease.

Excess fructose intake is also linked to Type 2 diabetes because it could trigger insulin resistance. (source)

In addition to the above, it’s vital to know that glucose sends a signal to the brain when you’re full. Fructose, on the other hand, does not! So, it’s easy to overeat and experience weight gain.

Homemade applesauce. #honeycrisp a little tangy but better for you than applesauce made with high fructose corn syrup. pic.twitter.com/7abYYE6BE7

What is the advantage of high fructose corn syrup over regular corn syrup?

High fructose corn syrup is cheaper, more readily available, and easier to transport for manufacturers compared to regular corn syrup. It also has a longer shelf life, a lower freezing point, and its taste and texture are better.

But it being cheaper is really the primary reason it gets used so much in the US.

OK, so you know to steer clear of corn syrup. What about honey? Is it with the sweeteners? Maybe jams and jelly? Or with the baking products?

Check out a recent article of mine where I shared if you could buy raw honey at Walmart and if honey in grocery stores is real. I also shared where you could buy real honey.

Chocolate lovers, this one is for you! These cookies are perfectly soft and chewy, loaded with chocolate chunks and cherries. Add Karo® Corn Syrup to any of your chocolate chip cookie recipes and make them chewy. #ChewyChocolateChipCookies #BakeBetterCookies #CollectiveBias
#ad pic.twitter.com/x4LQFgYAYN

Karo corn syrup is not high fructose corn syrup. The primary ingredient is regular corn syrup. Light Karo adds vanilla and salt, whereas dark Karo adds additional sweeteners such as “refiners syrup” and caramel color and flavor, in addition to salt and the preservative sodium benzoate.

It can be used to control the crystallization of sugar in candy, balance the sweet and sour flavor profiles, serve as an ideal glaze on baked ham and barbecue meat, and sweeten and thicken relishes and chutneys.

Some of your friends swear by Whole Foods. Just the other day, you were wondering why it’s so popular.

In a recent article, I offered an insider perspective, seeing as I was a general manager there for 20 plus years. In it, I shared when it became popular and whether it’s better and what’s special about it. But I also revealed if it is owned by Jeff Bezos.

Cane sugar is not better than corn syrup. Both are different types of sugar. Cane sugar is sucrose (common table sugar) and is an amalgam of glucose and fructose, while corn syrup is simply glucose, the body’s natural preferred energy source. But either can be unhealthy if consumed in high amounts.

Now, sugars are classified into two types: monosaccharides and disaccharides.

Both are examples of simple sugars. As the names suggest, the latter consists of two of the former. So, disaccharides are made up of two linked monosaccharides that are broken down later during the process of digestion.

One of the vital distinctions between these two groups is that they are digested and absorbed differently.

Monosaccharides are simple sugars, and they don’t need to be broken down further as they are already in such a state that they can be easily absorbed by the body. They are absorbed directly into our bloodstream, in the small intestine.

Disaccharides, on the other hand, have to be broken down before they are absorbed by the body. Cane sugar (sucrose) is a disaccharide, seeing as it’s made up of one glucose molecule and one fructose molecule.

Enzymes in our mouth partially break down sucrose into glucose and fructose, and the process is completed in the small intestine.

Regular corn syrup, on the other hand, is a monosaccharide. It can be absorbed directly.

Glucose raises blood sugar more quickly than other sugars triggering the release of insulin. The body requires insulin for glucose to enter the body. Once it’s in the body, glucose is converted into energy for immediate use or turned into glycogen and stored to be used in the future.

Insulin resistance occurs when insulin’s function of controlling the amount of sugar in the blood is impaired. (source)

For most people, one type of sugar is not necessarily better than the other. (An exception may be those battling diabetes who have to pay more attention to dietary guidelines).

But because corn syrup puts less strain on the body, a case could be made that it’s probably better than cane sugar.

A mixture of sucrose, glucose, and fructose is known as added sugar and the FDA requires that it should be disclosed on the nutrition facts label. It’s a term for identifying sweetened foods.

Sugar beets are another source of sucrose and are second only to sugar cane as the world’s major source of sugar.

What can I use instead of corn syrup?

As a general rule, substitute any of the following in recipes that call for corn syrup: white sugar dissolved in water, honey, molasses, maple-flavored syrup, agave nectar, brown rice syrup, or golden syrup.

Planning to prepare your favorite pecan pie only to find out you ran out of corn syrup? Not to worry, I’ve got you covered. Let’s find out a bit about 3 of the substitutes.

Substitute one cup of granulated sugar dissolved in ¼ cup of warm water for each cup of corn syrup.

If you prefer dark corn syrup, simply use brown sugar measured in the same way. It’s an awesome stand-in for pecan pie. But note that sugar crystallizes, so it won’t work for candy recipes that have to go past the soft-ball stage (235 degrees Fahrenheit).

Honey is an equal replacement for corn syrup, so you can use one cup of honey in place of a cup of corn syrup. It’s similar to sugar in the sense that it doesn’t prevent crystallization. But it’s not ideal for making candy or caramel. It has a distinct flavor that’s going to be detected in what you make. By the way, honey contains 40 percent fructose and 30 percent glucose.

Maple syrup can be used as a one-to-one substitute for corn syrup in most recipes. But like sugar and honey, it won’t work with candy. Remember, it has a strong, earthy flavor.

But we also found out if Karo corn syrup is high fructose.

Then, we explored if cane sugar is better than corn syrup. Lastly, we wrapped things up by considering what you could use instead of corn syrup.

link to Where Is Honey Found in the Grocery Store? (and is it fake?)

Sometimes it's difficult to find honey in grocery stores. Is it a sweetener? A jam? Or syrup? Or maybe even sold in produce? A lot of folks wonder where is honey found in the grocery store? Here's...

Continue Reading
link to Why Do Grocery Stores Change the Layout? (the real reason)

Love it or hate it, we all go grocery shopping. But if you know grocery stores, you know they frequently move stuff around. For most shoppers, these changes are confusing and often leads to the...