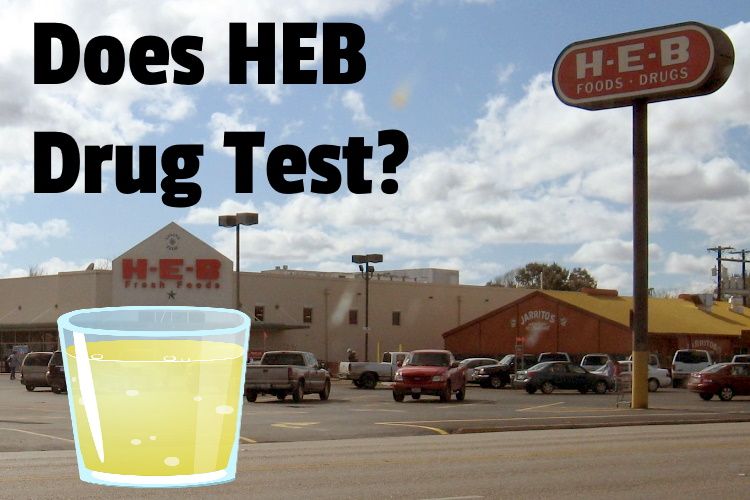 HEB is one of the largest grocery chains in the US, but only in Texas. Since they are over 100 years old, they often do things in an old-fashioned way. But for applicants and existing employees, does HEB drug test?

Here’s what I found out when I applied there a few years ago:

HEB doesn’t require a pre-employment drug test for everyone, but all are required to sign HEB’s Drug-Free Workplace Policy and are subject to random drug screenings. Those in safety-sensitive positions or those injured on the job are the most likely to be tested.

They explicitly state this on the careers page of their website.

So what does that mean for the average employee and how often do these “random drug screenings” really happen? And do they care if it’s just pot?

In this article, I’ll give you the lowdown on HEB’s drug policy. The following are what I know from over two decades of experience working as a general manager at Whole Foods.

Just imagine living your whole life without ever knowing an HEB grocery experience. So sad for those people. pic.twitter.com/TpTyoLAKxY

HEB’s drug testing policy focuses on employees who work in safety-sensitive positions. So, some employees are tested, while some are not tested, depending on the position. Additionally, HEB also conducts drug tests on a random basis each quarter.

In 2010, research by the Society for Human Resources Management revealed that about 57% of companies carry out pre-employment drug tests.

And with HEB, when an employee is being moved from a non-sensitive area to a sensitive area, they are likely to be tested.

What is a “safety-sensitive position”? Well, it could certainly include (but not be limited to) any of the following:

If an employee refuses to take the test, it’s as if they’ve tested positive. An employee may also be tested if they’re suspected of drug use or if they get injured at work.

It’s vital to note that HEB’s drug tests are not discriminatory.

They’re employed to help the company select the best candidates for the positions available. The tests also serve to eliminate or reduce workplace accidents. After all, a person under the influence of a drug is a danger to themselves and others.

The policy is not rigidly adhered to, and it’s often employed at the managers’ discretion.

So, someone could be tested in location A for an overnight stocker position, while someone else at location B, for the same position, may not be tested.

Let’s look at the results of a recent poll of HEB employees and whether or not they have been drug tested:

So you can see that in most cases, the majority probably won’t be tested. But you could be at any time, so if you use drugs, even pot, it’s probably not worth your applying at HEB.

What drugs does HEB test for?

Like other companies’ drug tests, the test that HEB conducts is meant to detect if applicants or employees use:

So yes, even just smoking weed could keep you from getting a job there or could get you fired.

When HEB sends you in for a random drug test. PS, I passed 😅 pic.twitter.com/OipS3HE0YJ

What happens if you fail a drug test at HEB?

If you fail a drug test at HEB and you’re just applying for the job, you won’t be hired. You can reapply six months later. If you’re already employed with HEB, you may lose your job or face disciplinary action.

If you have spoken to one of your managers (that’s if you’re an employee) that you’re having challenges with drug use, prior to being tested, they might be lenient if you have a plan to get help with your addiction.

Of course, if you kept quiet, you’d have to face the music.

If you’re already an employee, in all likelihood, you’ll be fired. But it’s not cut in stone. In fact, in some cases, someone could be given the pink slip, if they are a repeat offender or have other disciplinary issues. But someone else who has been an ideal employee might be given a second chance.

But for most current employees who fail the test, expect to be fired.

In a recent article, I went into great detail on what you need to know about grocery store drug tests. For example, I wrote about all the major grocery stores that conduct tests, what the test entails, whether employees are informed if they passed the test, and if one’s allowed to retake the test in case one failed the first time.

Here’s one from Texas. HEB is a Texas grocery chain which always steps up to help Texans in need. pic.twitter.com/aPENj05dEo

All HEB partners (employees) must sign the HEB Drug-Free Workplace policy, and this includes managers. HEB managers can be chosen for random drug tests, but according to some employees’ reviews, it’s not a requirement for all HEB managers to be tested unless you’re from the Pharmacy department.

In its publication Guidelines of HEB on Drug-Free Workplace, it states that the use of drugs and other controlled substances on or off the job is not aligned with state and federal statutes.

Their use could jeopardize the reputation of the company. And that the company seeks to ensure there’s safety for workers and customers.

It’s also clear that entry-level employees are tested and that this is often done at the discretion of the managers in charge of a particular location.

Tests are usually done on a random basis and for employees in safety-sensitive positions.

Central Market HEB does drug test at the time a candidate accepts employment and if an employee is involved in an accident.

Central Market is HEB’s high-end foodie market designed in the 1990s to compete with rival Whole Foods Market. While related to HEB, and run by Stephen Butt, nephew to Charles Butt who runs the regular HEB chain.

So they don’t do the random drug tests that HEB does.

But as with HEB, the reality, however, is that many employees were not tested when they were employed. And, some have been there for years. Some were tested randomly, and others when they were about to be moved into management positions.

At Central Market, a drug test is usually administered before a person is employed, and on occasions, employees are also tested.

And the test checks for the same drugs HEB tests for including pot.

If the test is negative, the results are usually received in a day, but it could take up to a week if it’s positive, as further screening is done to confirm the result.

Drug or medical tests are a standard procedure when you’re employed in big companies. These tests are not merely to check if a person is a drug user, but to confirm if they’re fit enough for the job.

Employees spend a considerable chunk of their time at work, and some positions are really demanding.

This is why a prospective employer would want to know if the applicant is healthy enough. Of course, if an applicant is discovered to be unfit, it’s smart to know this before they’re hired.

Central Market Houston will close today at 6PM to allow our Partners and customers to safely seek shelter until Hurricane Laura passes through the Houston area. We will reopen to normal operating hours as soon as it is safe for our Partners to return to work. pic.twitter.com/SS8lnWuogV

What do employers check for in a drug test?

Most employers who conduct drug tests look for cocaine, amphetamines, and opiates. Some, but not all, may also look for THC. But typically only in states where THC remains illegal.

They’re trying to ascertain if there are residues of drugs in an applicant’s or employee’s body, even after the effect of the drug has worn off. The process is technically known as Urinalysis.

A urine test is the most common way to ascertain this, and here’s a more comprehensive look at the drugs they check for:

It’s not easy to state whether HEB or Central Market would overlook THC (marijuana) use, seeing as it’s legalized in some states.

The reality is that pot is not yet legalized by the Federal government. So, it’s better to assume that its use will be frowned upon.

The reality is that about 57% percent of companies use drug tests.

So, there are also notable exceptions. Some folks think they’re an invasion of one’s privacy, but the truth is that employers need to be proactive about creating a safe and conducive atmosphere for workers and customers.

In the paragraphs above, we explored HEB and Central market’s drug test policies.

We looked at what happens when someone fails a test if managers are also tested, and we wrapped up by looking at what employers look for in a drug test.

We saw that not all applicants are tested prior to getting the job and that random tests are often conducted. It’s also possible that you’ll be tested when moving into sensitive positions.

HEB by Dave Stone is licensed under CC2.0 and has been cropped, lightened, and had image and text overlays applied.