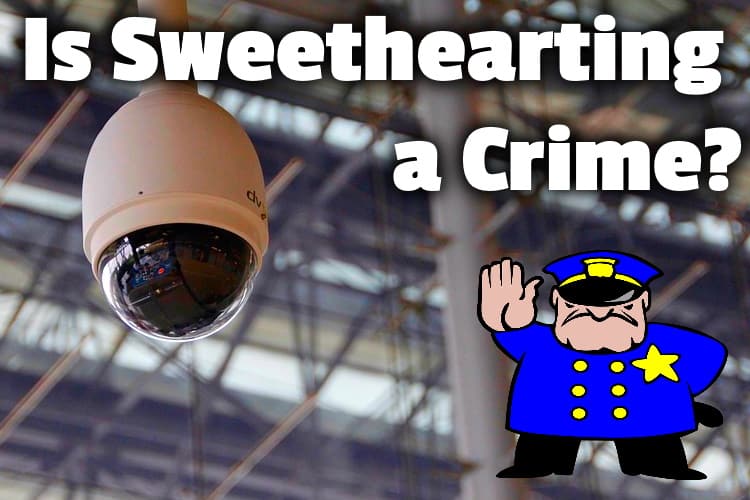 I ran grocery stores for many years. Over time I had to fire many seemingly great employees who never thought to ask is sweethearting a crime?

Here’s what all employees should know:

Yes! Sweethearting is a crime, and it makes up the highest percentage of theft in the US. Small discounts and avoiding ringing up certain items add up to a massive amount of money over time. You should completely avoid sweethearting, as it’s punishable by law and will certainly at least get you fired.

But there’s a lot more to know about sweethearting and where it falls legally.

Sweethearting is actually fairly common in the workplace. Kind customers, paired with a generous employee, can create a situation that might seem harmless. Other times, it’s one employee sweethearting another. Or sometimes friends of the employee come in to shop.

But sweethearting can be terrible for the business. Over time it can cost employers thousands of dollars. Those are dollars that can be passed along as raises, or in lowering prices to drive business.

In the rest of this article, I’ll answer some essential questions related to sweethearting:

Let’s check out the severity of this often-overlooked crime below.

With Valentines Day just around the corner, we thought we’d tell you about #Sweethearting 💓 😍

Did you know 95% of all businesses suffering from employee theft in the workforce and 75% of employees actually admit to stealing at least once from their employer!? pic.twitter.com/sQsoptIIsO

What Does Sweethearting Mean?

Sweethearting is a term that describes the act of an employee assisting a customer by reducing the cost of their total purchase in one way or another.

There are many ways to enable sweethearting, but all are a crime, nonetheless. Employers and even customers can see it as a bad sign for the business.

Here are a few examples of sweethearting:

Again, there are no situations in which any of the listed methods of sweethearting are acceptable.

“Sweethearting” is Theft at The Point of Sale and Not Romantic for Retailers https://t.co/QvEJQsfL2P pic.twitter.com/Spr1N7cHAO

Why Is Sweethearting Considered Bad by Employers?

Sweethearting is considered a bad practice by employers for many reasons.

The most common situation in which this arises is when a friend or family member shops at the store. Certain stores offer a family discount, but the discounts should not extend beyond that.

Sweethearting for anyone, including friends and family, is frowned upon by employers.

Here are just a few of the reasons why:

One of the main reasons that employers don’t like sweethearting is because it is causing the store to lose money. When loss prevention wonders where the excess items went, there’s nothing to show.

Giving away a pack of gum might seem insignificant to an employee. But imagine if every employee gave away a couple of bucks a shift every day they worked. Over time, that could easily add up to hundreds or thousands of dollars.

Plus, in my experience running stores for Whole Foods for many years, it was rarely something that small.

Often it would be $40 of seafood with a sticker for chowder fish (a low priced item). Or maybe 4 filet mignon steaks rung up as 1.

Now some employees might think their company makes bank, and that losing small amounts of money won’t hurt anyone.

Another reason that employers dislike sweethearting is that it shows the customer that their employees are irresponsible.

If a store has employees who give away free items to some people but not everyone, it’s now a matter of favoritism. Customers need to know that the prices are fair and consistent at the store.

And even a customer who appreciates the deal knows that it’s wrong. In fact, some may report the employee despite the employee seemingly doing them a favor.

Employers can view sweethearting as direct theft, especially when done via scan avoidance.

Taking an item without paying for it, or paying less than they are supposed to, is theft. Everything must be paid for unless the label says it’s free.

Employees who process items without scanning them are now an accessory to theft.

3. It affects the manager

Even if the store’s manager isn’t aware of the issue, it can trickle up to district managers, regional VPs, and higher up the chain. Ultimately department and store managers are responsible for profitability.

If sweethearting is rampant enough, that can tank a store or department’s profitability. This outcome can not only be bad for the employee but the manager’s career as well.

LPmag: “This revealing and counterintuitive research #study on #sweethearting is especially important during the #holiday season.” https://t.co/AObOi46TJs pic.twitter.com/OqBoo4UnYH

Do Employers Have You Arrested for Sweethearting?

Sweethearting is undoubtedly a crime, but most employers won’t have you arrested for it.

This lack of arrest happens because most employers don’t see the act as worthy of being arrested. However, they will fire almost any employee who performs sweethearting, even if they only do it once.

There haven’t been many cases in which an employee has been arrested, but it’s not impossible to do.

While even a single act of sweethearting can get you fired, employers usually only call the police when it becomes a serial problem.

Giving away massive amounts of items or a couple of expensive products is likely to get the police involved.

If the employer has evidence, they can press charges against the employee.

Whether the evidence is a video from the store’s cameras, data from the employee’s user access information or another source, sweethearting can make your life much worse.

There are some methods with grey areas, such as the coupon scanning error (or lack thereof), in which case you should always contact your employer.

It only takes a few seconds or minutes, but it can potentially save your job and more. Employers will also see this as a sign of honesty, which will improve your standing in their eyes.

In short, it’s unlikely that you’ll be arrested for sweethearting.

However, you’ll likely be fired, and a phone call to the police isn’t out of line for the employer. Protect yourself by avoiding sweethearting at all costs.

Other reasons for being fired range from being sick too much, to even something like gossipping too much.

It can honestly be surprising what actions or choices can lead to someone being fired. Just click those links to read more detail on my site about either issue.

An employee is  5.4 times  more likely to steal from  their  company  than  a  customer  is.  As a result, employee theft alone costs U.S. businesses  $50 billion annually. Here’s how #retailers can be proactive about preventing employee #theft https://t.co/9ivSUPlOth pic.twitter.com/fNaQ7Vd6cZ

Is Sweethearting as Bad as Stealing?

Yes, is the short answer.

While most employers use a lot of leeway, judgment, and flexibility in working with and disciplining employees, theft is theft. Employers have to look at theft in very black and white terms.

The employee either stole or they didn’t steal.

The reason is that if they fire one employee for sweethearting and not another, they are opening up a huge liability for themselves. After all, discrimination is a huge charge against an employer. And when they don’t discipline the same way across the board, that’s essentially what they are doing.

Some employees might feel as if they’re helping a customer in need without understanding the severity of the situation. These cases usually end in termination of employment, but it doesn’t have the same level of intent as someone giving their buddy $40 of seafood for $5.00.

It’s also possible that some newer and more naive employees might not even realize that what they are doing is theft or is wrong.

On the other hand, employees who use their friends and family to steal through sweethearting are entirely responsible for their actions in every way.

In these cases, sweethearting is considered just as bad as theft. That’s even truer since the employee likely planned the action before it happened.

This scenario is one of the few that warrants handcuffs.

Loss prevention is allowed to handcuff their employees while waiting for the police to arrive in most states and some countries. When an employee is caught in the act, and they’re completely aware of their actions, they have committed a crime.

By definition, this makes them a criminal, which is just as bad as stealing.

The only situations in which sweethearting might be taken less seriously is through manually inputting errors and other accidents that the employee didn’t intentionally perform.

Did I cover all you wanted to know about sweethearting and whether it was a crime?

In this article, I took a look at sweethearting.

We examined what it is and how it differs from actual theft. But we also explored why sweethearting is as bad as stealing. Lastly, we looked at how most employers handle it and what to expect if you are caught doing it.

You should avoid sweethearting at all costs, as it may get you fired or arrested.

Ultimately, we all need a job, and doing something dumb like sweethearting is a great way to lose a great job and jeopardize your future jobs. After all, most new would-be employers will want to talk to your last one.

For me, there was no better job than at a grocery store. If that’s where you are or want to be, check out all my tips on working in a grocery store in a recent article.

What you might find really surprising is just how good the pay and benefits can be. Just click that link to read it on my site.