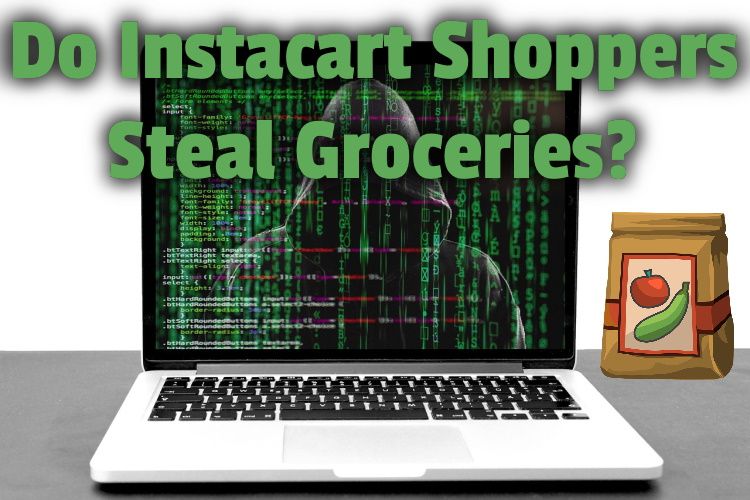 Instacart has become the dominant online grocery delivery service in the nation. But times are tough, and we don’t always inventory our orders or scrutinize our deliveries. So, do Instacart shoppers steal groceries?

As a general rule, Instacart shoppers do not steal groceries, but it has happened. Customers should review the Instacart receipt once the order is delivered and quickly report missing items to Instacart to receive a refund.

But missing items aren’t necessarily proof that the Shopper stole them. Mistakes happen.

Instacart investigates and would offer you credit or a refund, even if it were indeed a question of theft. There’s not much incentive for shoppers to steal groceries.

They could be deactivated from the platform if found, and as customers gave them low ratings, they will get fewer and fewer orders given to them since Instacart gives priority to the highest-rated Shoppers.

In the article, we’ll explore issues around whether Instacart shoppers steal groceries. How often it happens and what you can do if you think it has happened to you.

Let’s get into it…

This is my #InstaCart delivery from Publix. There was no way I was going to push that stack of soda out of the way with the glass storm door. I had to go out through the garage and go around. And then there was an item missing. pic.twitter.com/VTprPJMmTR

Instacart Shoppers do not pay for missing items, as they may not be responsible. When customers report missing items, Instacart investigates, and when it’s confirmed, it offers to refund the customer or credits them. That way, they can either have their money back or order again.

Instacart does not require that its Shoppers pay for missing items when they’re reported as there is no way to prove the Shopper took the item or was negligent.

Instacart takes responsibility for it.

It’s a part of the cost of doing business. In some cases, Shoppers say that cases of missing items are scams perpetrated by unscrupulous customers.

But in some cases, the Shopper may have forgotten. It happens, even though it’s uncommon. No matter what caused it, the Shopper often “pays” for it. Didn’t I just say they don’t pay for missing items? I’ll explain.

Instacart doesn’t charge Shoppers for missing items. But it has a rating system through which customers rate the quality of the service they’re being provided by a Shopper.

It stands to reason that a low rating would be given if one were to find out that items that one needs urgently and has been paid for are missing!

If a shopper gets consistently low ratings, it will affect their ability to get orders to deliver in the future, which would hurt their earnings.

The rating system is a powerful feedback tool for everybody. But have you ever wondered whether Shoppers can rate you?

That’s the theme of a recent article of mine where I revealed whether shoppers also get to rate you. I also explained whether they can choose orders they fulfill. And, the elephant in the room: What happens if a shopper were to complain about you?

@Instacart also just realized I paid $30 dollars for pull ups that I DID NOT RECEIVE. Overcharged on my bill for $70 for NOTHING
No pull ups here#scammed pic.twitter.com/87o6qETSI1

Can you get scammed on Instacart?

It is possible to get scammed on Instacart, but unlikely. Because the platform has a system for rating Shoppers, fraudulent Shoppers can easily be fished out and let go by Instacart. It’s not easy for Shoppers to perpetrate scams, and most Shoppers want long-term income more than a quick scam.

There have been reports of scammers hacking the accounts of genuine Instacart Shoppers. They could buy the groceries, and in some cases, add things you did not order.

Then, they would pretend as if they were on their way to deliver.

A few minutes later, you could see a notification on the app that your order has been delivered, when in fact, it has not been delivered!

If that’s what you experienced, the solution is to quickly report the incident to Instacart.

It would be investigated, and the situation would be remedied. You’ll get a refund or Instacart credit so that you can reorder.

usatoday.com has a report of a woman who claimed that her $351 purchase never arrived, even though it was marked “delivered” immediately after the Shopper started shopping!

The Shopper even pulled up an old picture of her home, which was used as proof that the delivery has been made!

There have also been a few cases where unscrupulous Shoppers added a few items for themselves and charged them to customers’ accounts!

They are hoping that they won’t notice it. But, these scams can be easily detected. Once you do, simply report it to Instacart Care, and it would be resolved.

In some cases, the Shopper must have delivered to the wrong address.

Of course, it would seem like a scam to you. The important thing is to realize that even though you did not get your order when you wanted it, Instacart would ensure you get your money back and, in some cases, would reorder the items.

Most Shoppers are good people, and some provide truly outstanding service every time.

And there are enough of them that some customers would love an option of using the same Shopper again. Is that possible? I answered the question and similar ones in a recent article of mine.

why did these come in my instacart order 😭😭😭 as a lactose intolerant person, I definitely did not order these things pic.twitter.com/qogx5PhBp6

Can Instacart Shoppers add personal items to your bill?

Shoppers can update an order based on your instructions which, with an unscrupulous Shopper, could include adding personal items to the order. Customers should review the Instacart receipt for the delivered order, which makes it easy to detect any products not originally ordered.

So while the occurrences are rare, there are a few reported cases where an unethical Shopper added something for themselves to a customer’s bill, hoping that they won’t notice.

But, it’s extremely unlikely because such a Shopper could be easily found out, terminated, and possibly even have criminal charges filed.

That leads to a relevant question: Why do Shoppers have the ability to update an order in the first place? It’s simple.

Perhaps, a particular item you ordered is not available in the store, and they sought your permission to replace it with another.

Or maybe the quantity they have is not enough, and the Shopper got your permission to make it up with another brand.

There are rare cases where some customers ask Shoppers to add a bottle of soda or a candy bar for themselves.

But unless you specifically instructed a Shopper, they have no right to update your order. But even if they did, it’s nothing to worry about. Simply ensure that you always check your receipt and reach out to Instacart if you noticed anything strange.

It’s not an issue to worry about as most shoppers are honest and hardworking people. Because they’re offering a vital service, it’s natural to wonder if they should be tipped.

Should you tip Instacart drivers?

Check out a recent article of mine where I explained how Instacart works. I looked at its delivery fee and how its grocery pick-up service works. And I also spoke about whether its drivers should be tipped or not.

Do you get a paper receipt with Instacart?

Customers do not get a paper receipt from Instacart. This is because Instacart usually marks up the prices from what the store sells things for. The receipt customers receive is from Instacart and is handled through the app.

Marking up the shelf price is one of the ways Instacart makes its money.

Instacart marks up most of the prices, especially in stores where it’s not a partner. But there’s nothing wrong with markups. They are a normal part of doing business.

After all, Instacart is a business, not a charity. It has arrangements with its partner stores, too. And ultimately, customers are paying more for the convenience of not having to shop themselves.

Luckily, I get into all that in a recent article. I not only say how much more they charge, on average, compared to the store price. But I also share the few stores where they don’t do that.

How does Instacart screen Shoppers?

The process starts after Instacart has extended a conditional offer to an applicant to become one of its Shoppers.

Prospective shoppers have to provide a written consent because the screening process is not performed by Instacart directly but rather by Checkr, Inc.

Applicants can follow the progress of their background check on a dedicated portal owned by Checkr. They can also engage with the company if there are issues in the background check they believe are inaccurate and would like to dispute.

The driving/traffic records of full-service Shoppers are checked to ensure that there are no significant moving violations.

They also require a criminal background check on all applicants.

It says it is performed in line with all applicable local, state, and federal laws and its belief in providing employment opportunities.

In the article, we explored whether Instacart shoppers steal groceries.

We looked at whether you can get scammed on the platform and if Shoppers can add personal items to your bill! We also checked if you get a paper receipt from Instacart. But we also walked you through the crucial process of how to request a refund from Instacart if you feel you are owed one.

Lastly, we wrapped with how it screens its Shoppers.

link to Why Does Instacart Charge More Than the Store? (or do they?)

Instacart is a delivery service that makes shopping much easier for people. But some people have noticed that Instacart charges customers more for items than the store does. So I've wondered why does...

Continue Reading
link to Should You Tip Instacart Drivers? (yes, here's how much)

Instacart operates like ride shares but delivers groceries instead of people. It's similar to ordering a pizza, which usually requires a tip. If it's your first time using Instacart, you might be a...