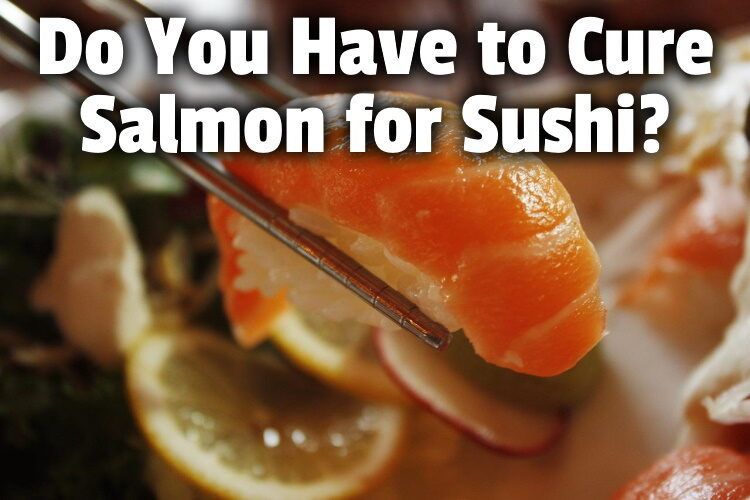 Salmon is one of the types of fish enjoyed the world over. And it’s the 2nd most popular fish for sushi. But do you have to cure salmon for sushi?

As a general rule, salmon does not need to be cured for sushi, and cured salmon would not typically be served in sushi restaurants. But if the fish being used isn’t sushi-grade, curing the salmon can provide additional protection against parasites.

So, you want to ensure that the salmon you use for sushi is pathogen-free by procuring it from high-end fishmongers who would have ensured it was flash-frozen soon after it was caught to curtail the risk of parasitic infection.

But that’s just the tip of the iceberg.

In the next few minutes, we’ll explore whether it’s okay to eat salmon raw if it’s a prerequisite that salmon intended for sushi should be cured. We’ll even find out if curing kills bacteria and removes parasites and a lot more fun facts about using salmon for sushi.

We bring you our FIRE CRACKER MAKI

A sushi roll with raw salmon, tangy apple, crispy onion and spicy sauce, sprinkled with chilli powder and chive
We hope you like it!#glasgow #SPECIAL pic.twitter.com/Z8muI0lpaE

Is it okay to eat raw salmon in sushi?

Yes. It is okay to eat raw salmon in sushi. But ideally, the salmon used would be labeled as sushi-grade or at least be previously frozen farm-raised salmon, which have an almost zero risk of parasites.

That being said, it follows that you run the risk of contracting an infection when you eat raw salmon. To fully eliminate this risk, you’ve got to cook salmon at an internal temperature of 145°F (63°C).

Salmon, like most other animals, is susceptible to the risk of parasitic infection, especially if it is caught in the wild. It may have bacteria, parasites, and other pathogens in it.

This is because of its nutrition, and it may also be triggered if not handled properly. Farmed salmon, on the other hand, is nourished with feed pellets and is less susceptible.

So, it is not only okay to eat raw salmon, but millions of the world overeat it daily.

You simply want to ensure that you buy where you’re sure the fish you’ll be offered is fresh and of the best quality.

With what we’ve explored above, is it okay to eat raw salmon from the grocery store?

This is what I got into in a recent article I published. In it, I looked at whether it’s okay to eat raw fish from a grocery store and what happens if you eat raw salmon. I even shared what’s different about sushi-grade salmon.

Do they ever cure salmon in sushi?

No. Traditionally, salmon is served raw and uncured. However, there are places where they are cured and are still raw. Curing is often done to enhance the texture and flavor by reducing the water content. Depending on how it is cured, salmon can be cured and raw.

But as I said, if the salmon you bought is “sushi-grade”, you may dispense with curing.

But folks who opt to cure salmon are convinced it makes it better. They feel that raw salmon has high water content and is often too moist and soft after it’s been butchered.

In curing, they are not so concerned about how safe the fish is. Rather, they are aiming for fish that is crispier and sweeter.

So, they cure it before it is prepared and served. When cured with kosher salt, for example, a substantial portion of the moisture is leeched off the salmon, consequently improving its texture, flavor, and taste.

Want to know more about what differentiates sushi-grade fish from regular fish?

How do you cure salmon for sushi?

To cure salmon for sushi, coat both sides with kosher salt, refrigerate for 1 hour, place fish in a pan with 1 bottle of rice vinegar and add enough water to cover the fish, and top generously with ice cubes. Refrigerate for 1 hour. Pat dry, wrap tightly and freeze for 48 hours or longer.

Let’s explore what the above entails in some detail.

To cure salmon for sushi, place it on a tray and pat it dry with paper towels. Then apply a generous coating of kosher salt on both sides of the fish.

Some people do a mix of sugar and salt, so add both to taste or just salt.

The goal is to ensure that the salt touches every piece of the salmon. Then, it is refrigerated for 1 hour. After which, you apply rice vinegar in a container that would fit the fish perfectly. For a decent-sized piece (or pieces) of fish, 1 whole bottle of regular rice vinegar (not seasoned) is perfect.

Let it cover about 75% of the fish, then add water, and ice, until it’s fully covered.

Then, refrigerate for 30 minutes to an hour again. After removing it from the fridge, place it on a tray and pat it dry again thoroughly. Ensure that it is completely dry and then put it in a plastic wrap. Make sure it is air-tight. Then, let it freeze for at least 48 hours. The curing would make the taste and texture a lot better.

This is what I explored in a recent article I published. I looked at what makes fish sushi-grade, and can sushi be made with any fish? Then, I showed whether you could use store-bought salmon for sushi. But I also revealed the most common fish used in sushi.

Hadn’t made home sushi in a while, but it was yum. Gravlax (cured salmon) + avocado + cucumber. pic.twitter.com/VasUrOeii9

When properly done, curing salmon can kill bacteria and the parasites in it. It may not remove them, but they would be rendered inactive and consequently ineffective.

There are different ways that salmon can be cured. It can be dehydrated, it can be salted, you can add sugar, you can add vinegar or nitrite, and you can choose to smoke it.

When cured well, salmon is safe to eat, even if it’s difficult to say that the bacteria are dead and that parasites have been removed.

Salt is a common unsung hero in the way against pathogens. But its potency has been known for decades as it inhibits the growth of unwanted elements in the fish if cured.

That said, freezing salmon as prescribed by the FDA or cooking it at an internal temperature of 145°F (63°C) are the best ways to ensure you have no worries about bacteria or parasites.

@foodwishes My mom and I are absolutely obsessed with your cured salmon. She loves it on bagels. And ai love it with scrambled eggs and english muffins, and in sushi rolls or over sushi rice. This recipe has changed my life! pic.twitter.com/GOtN6yzXJ3

Does curing salmon make it safe to eat raw?

But I won’t advise that you buy low-grade salmon and hope that curing would rid it of pathogens!

Start strong. Buy the freshest quality, then cure. And ensure that the fish is handled properly in the curing process because that can serve as a point for contamination.

Buy cured salmon from high-end fishmongers or do it yourself under hygienic conditions, and you’ll be fine.

The utensils, paper towels, gloves…must be clean, and when you store the salmon in the fridge, you might want to keep it in the lowest compartment on its own. So, you eliminate the risk of the possibility of cross-contamination.

In the article, we found out if it’s okay to eat raw salmon.

We learned it’s okay if it’s farmed salmon or wild salmon that’s been flash-frozen as required by the FDA. Then, we explored whether salmon meant for sushi is cured. No. It’s usually served raw and uncured.

Then, we learned how to go about curing salmon and whether curing kills bacteria and removes parasites. If done properly, curing can render parasites and bacteria powerless. That’s why it’s an age-long practice.

Lastly, we wrapped things up by considering if curing makes salmon safe to be eaten raw.

Image by Jumi Kang from Pixabay

link to How Do I Know If Salmon Is Sushi Grade?

Salmon is the 2nd most popular fish used in sushi. But can you just buy any salmon from the grocery store if you want to make your own? And how do I know if salmon is sushi grade? As a general...