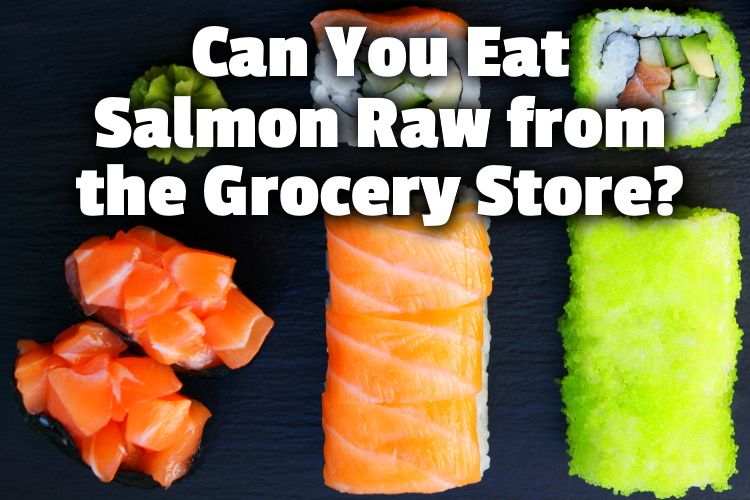 If you enjoy eating sushi or sashimi, you know that it’s made from sushi-grade raw fish. This has some people wondering what exactly is “sushi-grade” fish, and can you eat salmon raw from the grocery store?

So I decided to do some research, and here’s what I found out:

Yes, you can eat salmon raw from high-quality grocery stores if it’s been previously frozen. “Sushi grade” doesn’t have a legal definition. It’s simply up to the grocery store to say if something is safe to eat raw. But salmon can contain parasites, so buying previously frozen ensures any parasites are killed.

But that’s not all there is to know about grocery store fish and sushi.

After all, there’s wild-caught, farm-raised, and different types of salmon such as coho, sockeye, or Atlantic. And some may be better than others if you’re eating it raw. And is grocery store fish even good for sushi? Click this link to read my comprehensive guide on grocery store fish and sushi.

So in this article, we’ll explore them all, as well as the best practices to ensure what you eat is both safe and delicious.

Can I eat raw fish from the grocery store?

Yes. Some raw fish from higher-end grocery stores can be eaten raw. Look for the best, freshest fish and ask the fishmonger which is freshest. You may also see fish labeled as “sushi grade,” “sashimi grade,” or “for raw consumption.”

Unfortunately, there are no federal regulations about what constitutes “sushi-grade” or “sashimi grade” though.

It’s up to the grocery stores as to whether they want to label anything that way. To avoid legal issues if someone eas some and gets sick, many stores avoid these labels altogether. But that doesn’t mean they don’t have any fish that could be eaten raw.

To put it simply, you should consider the type of fish, the freshness, and whether it has been frozen or cured.

However, almost all cod is unsuitable for raw consumption, whether fresh or frozen. That’s because cod is prone to bacteria and parasites. While deep-freezing will kill the parasites, it won’t kill any bacteria that may be present.

So, once it thaws, bacteria will again become active, eventually causing food poisoning, if it was in the fish in the first place. Buying super-fresh fish from a reputable store helps reduce this risk.

So yes, you can eat raw fish from the grocery store. Just be aware of the type of fish you are buying and pay attention to the label.

At 10:50 am the next day, Ben sits down at his desk, accompanied by the only way he knows to eat raw salmon at work without raising question. #beardonkadonkfic pic.twitter.com/tCRymqZk3i

What happens if you eat raw salmon?

Many people eat raw salmon. However, raw salmon, not previously frozen may contain parasites. It can also contain bacteria that will not be killed by having been frozen. Cooking salmon to an internal temperature of 145 degrees Fahrenheit kills bacteria and parasites.

The FDA lists wild salmon as a known source of parasites. By eating raw salmon, you open yourself up to get tapeworms, including the intestinally invasive Japanese broad tapeworm.

The good news is that with proper handling and storage, the risk of getting sick declines greatly.

When I say that raw salmon needs to be handled properly, I mean that it needs to be flash-frozen down to -20 degrees Fahrenheit for at least 30-48 hours. This is to kill off any parasites present, and is generally standard procedure.

It would be best if you also were very careful to use clean utensils, dishes, and knives when cutting up your salmon.

While you are preparing your salmon to eat, you can keep an eye out for any parasites that are still in the fish. Freezing the salmon doesn’t remove the parasites. It just kills them.

If you see something that looks like a small watch spring or a grain of rice embedded in the fish, just remove it. If you want to be really thorough, you can slice it super thin and shine a light through it.

Now if you want to go the extra mile in terms of protecting yourself with raw salmon, try curing it first.

Today is #NationalSalmonDay and we are dreaming of this salmon poke bowl!

Whether you eat it raw or cooked, there are so many ways you can enjoy salmon! What’s your favorite way? 🍣

Can you eat Costco or Walmart salmon raw?

You can eat Costco salmon raw under certain conditions. However, I would not eat raw salmon from Walmart. Costco has trustworthy labeling, high volume, and fresh fish that never sit for too long. Walmart instead focuses more on low price than quality.

But that’s a quick snapshot, so let’s explore each grocer one at a time.

Yes, it is safe to eat raw salmon from Costco. But you should follow some guidelines and be comfortable with a certain level of risk.

Also, look for “farmed Atlantic salmon” or “farmed Alaskan salmon.” Salmon, in general, is a high risk for parasites. But farmed salmon is raised on feed pellets, preventing them from eating-infected prey.

Wild-caught salmon does taste better, but Costco does not meet the deep-freezing requirements set forth by the FDA for parasite destruction.

Walmart has high volume and movement of products, but the quality of meat and fish sold at Walmart is questionable at best. They don’t have a fishmonger, so there isn’t anyone you can talk to about the fish.

Even their frozen fish gets poor reviews. (source)

If you really don’t have any other option for fish, follow the same guidelines you would if shopping at Costco.

Also, look for packaging that states the fish is safe for raw consumption. If it doesn’t say that, look for flash-frozen or some type of similar wording.

Flash-frozen, farm-raised salmon will be the safest fish to eat raw.

Just remember that you have to be comfortable with a certain amount of risk. Any time you eat raw fish from any source, you are risking a bacterial or parasitic infection.

For many people, the best, freshest source of fish is Costco or Walmart. But they are two very different supermarkets, especially when it comes to fish.

Wait… “supermarket?” What’s the difference between a supermarket and a grocery store?

The terms can be used interchangeably, but there are a few differences. Just read this recent article to read about the differences between the two.

Yes, freezing will kill parasites, however, the freezer must be able to reach -31° F. So, your freezer at home is not going to get cold enough to kill any parasites. Sushi restaurants and fish markets will use a “super freezer,” a freezer that maintains super-cold temperatures.

But large tuna species and farmed fish, like salmon, are exempt from the FDA’s freezing requirements. The feed that farmed fish is raised on must be verified to be free of parasites. (source)

So if you want to eat salmon that you purchase from the grocery store, be sure to buy farmed salmon.

If you’re lucky enough to have a grocery store with a good seafood department, you should consider developing a relationship with the fishmonger.

A knowledgeable fishmonger will be able to tell you about when and where the fish was caught.

They should also be able to tell you if their fish is safe to eat raw. If you don’t have a good seafood department, look in the freezer section for farm-raised salmon.

Really good grocery stores will have fresh seafood, an in-house butcher, and maybe even a pharmacy.

How is sushi-grade salmon different?

It’s up to each individual store to decide, but it should refer to extremely fresh fish from a well-known and reputable source. Officially, the term “sushi-grade” or even “sashimi-grade” doesn’t mean anything. It’s a marketing term that has little meaning when it comes to consuming raw fish.

Unlike beef, the USDA does not have any national guidelines regulating or grading fish. But does that mean sushi-grade isn’t a real thing? Click here to read my complete breakdown of the legal definition for sushi-grade and what it really means in terms of protecting you from parasites.

The FDA has issued advisory guidelines outlining processes for handling fish for raw consumption. However, those guidelines do not intend to determine the quality of fish. The guidelines are only meant to let consumers know that it’s relatively safe to eat raw fish.

So when you see fish labeled as “sushi-grade,” it means that the seller has deemed it safe to eat raw.

Essentially, you’re trusting your grocery store or fish market. They are telling you that it is safe to eat raw, under no regulations from the USDA or the FDA.

However, the FDA does have guidelines regarding the consumption of raw fish. They recommend that fish should be subjected to deep-freezing before consuming raw. Again, this means it has been frozen down to -31° F.

So if you see the “sushi-grade” or “sashimi-grade” label on salmon and other fish at your fish market, it likely means that it has been subjected to deep-freezing.

Deep-freezing kills any parasites in the fish.

Farm-raised salmon and tuna species are fine without being subjected to deep-freezing. Other salt-water fish may be ok to eat without deep-freezing, too.

The only reason the FDA doesn’t provide guidance on other fish is that there isn’t enough data out there to know for sure, which means that not enough of other types of fish have been eaten raw to provide sufficient evidence of its safety.

Freshwater fish or fish that spent part of its life in freshwater should be avoided.

If you don’t have access to a fish market, the grocery store is the next best choice.

And while there is a risk to eating raw salmon, it’s the safest option. Especially if it’s farm-raised and/or flash frozen.

The USDA or the FDA doesn’t regulate the terms “sushi-grade” and “sashimi-grade.” But if they are being used, it means that the fishmonger has deemed them safe to eat raw.