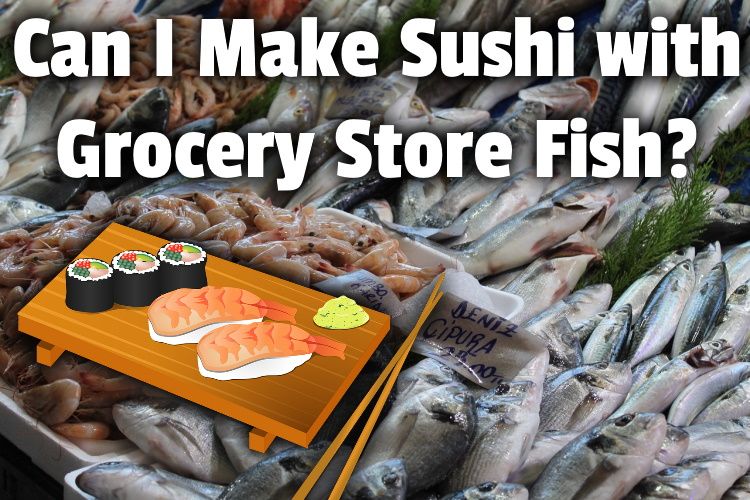 It’s one thing to eat sushi at a sushi bar, but it’s totally different to make it yourself. You see tuna and salmon at the fish counter, but can I make sushi with grocery store fish?

Here’s what I know from decades of experience:

It is possible to make sushi with grocery store fish as long as it has been previously frozen in line with FDA guidelines regarding how raw fish should be frozen before it’s deemed safe to be eaten raw. Look for fish labeled “sushi-grade”, “sashimi-grade”, or “for raw consumption.”

But of course, even that FDA promise doesn’t mean eating raw fish is 100% risk-free.

So, in this article, we’ll explore related themes such as what exactly makes a fish sushi-grade and whether sushi can be made with any fish. And we’ll find out the most common fish that are used in sushi. And does sushi-grade even have a real “legal” meaning?

Just keep on reading to find out.

Once you have our Sushi grade fish, you won’t want anything less. #sushi #salmon #mississauga #toronto #oakville #brampton pic.twitter.com/7sMj98zTaJ

What makes a fish sushi-grade?

Sushi-grade fish does not have an official legal designation but is generally fish that was flash frozen on the boat shortly after being caught at either -4°F for at least 7 days before being sold, or -31°F for at least 15 hours.

The aim is to ensure that the fish is free from parasites that could trigger food-borne illness.

But it’s vital to repeat that unlike the USDA grading of beef, “sushi-grade” has no official regulation backing it.

What the FDA provides are guidelines as to the time and temperature at which fish meant to be consumed raw should be frozen at. As such, it’s also largely employed as a marketing term.

But there’s no reason to be anxious if fish has been processed in accordance with these guidelines. It’s regarded as “sushi-grade.” It must have been killed, gutted, cleaned properly, and then flash-frozen upon being caught.

Boats used for fishing have state-of-the-art freezers built-in, so the freezing process is immediate, and it preserves the freshness and taste. And above all, it kills the parasites that are often found in fish such as salmon.

The FDA guidelines are:

The process of killing, gutting, and freezing must be done within 8 hours of the fish leaving the water.

Can sushi be made with any fish?

Sushi should not be made with just any fish. Sushi-grade fish, most often tuna or salmon, is ideal due to the reduced risk of parasites which can lead to illness. Freshwater fish is especially not ideal for raw consumption.

The following are the type of fish that’s commonly used in sushi.

Although it’s worth pointing out that some of those, such as crab and shrimp, are not served raw but instead are cooked.

The following types of tuna are popular:

That’s because it’s not really a type of tuna. It usually refers to either bigeye or yellowfin. But both are great in sushi.

It’s worth stressing that freshwater fish should never be eaten raw because they’re more susceptible to parasites than fish found in saltwater.

Say you’re looking for tuna at Trader Joe’s, but you aren’t sure of its quality.

Can you eat Trader Joe’s ahi tuna raw? Does TJ’s sell sushi-grade fish? And is frozen ahi tuna good for sushi? I explored these themes and more in a recent article. I even got into the 1 product they sell that makes great at-home sushi!

Got some #salmon #sushi from the local grocery store here in Houston! #ratemyplate 😍 pic.twitter.com/vOK0yWsi5H

Can you use store-bought salmon for sushi?

So, also look for “farmed Alaskan salmon” or “farmed Atlantic salmon” if they don’t have anything labeled sushi-grade.

The feeding and overall health of the salmon have been top priorities while they were being farmed.

But do not buy wild salmon. Unlike its farmed cousin, it’s susceptible to bacteria, parasites, and other pathogens that may trigger an infection!

And it’s worth repeating that no fish is 100% safe, no matter how it was caught or frozen. So there is a risk no matter what you do. But these steps and tips will lower that risk.

You’re in luck because a recent article of mine answers the question and more. I explained what happens when you eat raw salmon. And whether freezing salmon kills parasites.

What is the most common fish used in sushi?

Virtually all fish is edible, but only a few can be eaten raw.

The bluefin is supreme in sushi lore. It’s the largest and is expensive. It’s known as kuro-maguro to the Japanese and is found in the Atlantic Ocean and the Mediterranean sea.

It can weigh 600 and 1000 lbs.! It is an exquisite blend of fat and proteins. Naturally, it’s the tastiest. And it’s almost as if it melts in one’s mouth.

Little wonder, bluefin is the most common fish used in sushi. Did I mention that it’s also the most expensive?

On the whole, tuna and salmon are the top choices. Tuna is preferred because it’s more resistant to parasites. It’s safe to go with whatever you’d find in an upscale sushi bar, provided it’s been previously frozen.

After all, the bars are the pros.

Kroger, Publix, Wegmans, Costco, Whole Foods, and Trader Joe’s are some grocery stores where you can get high-quality sushi-grade fish. And of those, Whole Foods sells the best quality fish.

The reality is most grocery stores sell sushi-grade fish.

So, you can buy sushi-grade at a lot of higher-end grocery stores, but if you’re sensitive about quality, a survey shows that Whole Foods is your best bet. This shouldn’t come as a surprise seeing as it’s one of the best grocery stores, in fact, a pioneer in the industry.

In a survey by mashed.com, Whole Foods led the pack when respondents were asked who they thought does the best job when it comes to providing better quality fish.

In the article, we explored what makes a fish sushi-grade and whether one can make sushi with any fish.

We also found out if you could use store-bought salmon for sushi. Then, we looked at the most common fish used in sushi. Lastly, we wrapped things up by finding out the grocery store that sells the best sushi-grade fish.