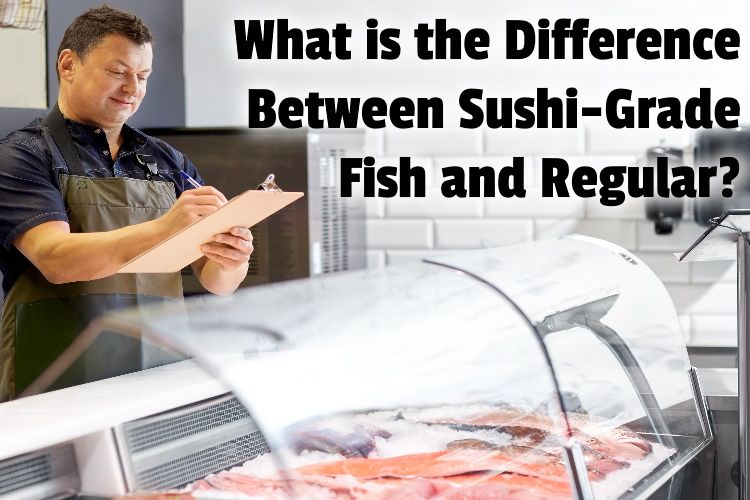 You’ve heard the term sushi-grade so many times. But does it really mean anything or have any legal standing? And what is the difference between sushi-grade fish and regular?

In this article, we’ll explore what kind of fish is sushi-grade. We’ll find out if frozen fish can be used for sushi. But, we’ll also check out if there’s a difference between sushi-grade salmon and regular salmon.

One of the best things about living near a Korean market – sushi grade fish for homemade sashimi #MyDayInLA pic.twitter.com/5bNW1yqBVF

What kind of fish is sushi-grade?

The term “sushi-grade” is used to indicate fish that is deemed safe for raw consumption. It is generally caught and then flash-frozen to a very low temperature while still on the boat, which minimizes the risk of parasites.

But, it’s a marketing term employed by fishmongers and seafood restaurants to increase sales. So, the fact that fish is labeled “sushi-grade” does not mean it has been certified 100% safe for raw consumption.

The designation is not regulated by the government.

Having said that, there are FDA advisory guidelines regarding raw fish, and because it’s in the interest of grocery stores, fishmongers, and seafood restaurants to sell safe raw fish, they buy from sources that comply with the guidelines.

So, you don’t have to worry when eating sushi-grade fish, but it’s good to know that compliance with the FDA guidelines is not monitored.

In fact, there’s no official, government-backed definition of what constitutes “sushi-grade.” There is no governmental organization that grades fish the way beef is graded by the USDA.

The advisory guidelines issued by the FDA is known as the “Parasite Destruction Guarantee”, and it relates to freezing the fish to eliminate the risk of food-borne illnesses.

They are not about sushi or sashimi-grade fish but about fish that is deemed safe to be consumed raw. So, it’s more general in its scope.

The following are a part of the guidelines:

1lb sashimi grade salmon from the fish market. @BowTiedOctopod gotta work on my cutting but was better than anything I’ve had at a restaurant. $24 pic.twitter.com/NfKhqMTPlM

Can you use frozen fish for sushi?

It is not advisable to use frozen fish for sushi at home unless labeled “sushi-grade” or “sashimi-grade”. This is because to be designated safe for raw consumption, the fish has to be frozen to at least -4°F, and most home refrigerator-freezers do not go that low.

But again, it needs to either be down to -4°F for 24 hours or down to -31°F for 15 hours. And that’s a tall order for home freezers and even for most grocery store freezers.

So it’s safer to only buy fish labeled “sushi-grade” or “sashimi-grade”.

But all fish that restaurants sell to eat raw has been frozen. And then it’s thawed before it’s prepared for sushi. Ideally, you want to eat it the same day you prepare it or leave the leftovers in the fridge for not more than 24 hours.

But you’ve probably wondered if it’s okay to eat salmon from the grocery store raw?

You’re in luck because a recent article of mine answers the question and more. I explained what happens when you eat raw salmon. And whether freezing salmon kills parasites. But I also cover why you should never eat wild-caught salmon raw.

don’t tell my stomach that this isn’t sushi grade salmon and in fact discount salmon from baker’s pic.twitter.com/XXbxRocmHz

Is there a difference between sushi-grade salmon and regular salmon?

Sushi-grade salmon has been flash-frozen on the boat shortly after being caught and held to at least -4°F or lower for at least 15 hours. Regular salmon may or may not have been frozen and was likely not frozen while on the boat, making it more susceptible to parasites.

Regular salmon, like most fish, is susceptible to parasites in the freshwater it lives in. Unless it’s grilled, boiled, or fried, eating it raw is a surefire invite to food-borne illnesses.

But sushi-grade salmon has been cleaned very well after it was caught and gutted, then it is flash-frozen at -40 degrees C to kill the parasites in it.

The flash-freezing process is an advanced freezing technology that has no adverse effect on the fish’s quality, freshness, or taste.

So, you’re tuna shopping at Trader Joe’s, but you aren’t sure of its quality.

Can you eat Trader Joe’s ahi tuna raw? Does TJ sell sushi-grade fish? And, is frozen ahi tuna good for sushi? I explored these themes and more in a recent article. I even cover the 1 thing about TJ’s ahi that makes most people want to avoid it.

Can you use Costco fish for sushi?

While Costco does sell some sushi-grade fish, but not all their fish are appropriate or safe to be eaten raw. So look for varieties labeled “sushi-grade” or “sashimi-grade” and plan to cook any other fish purchased that isn’t labeled that way.

Let’s check out some varieties of fish you’re likely to get at Costco.

They sell 3 types of salmon:

For sushi, look out for “farmed Atlantic salmon” or “farmed Alaskan salmon.”

Fish that are farmed have lower risks of having parasites because their feeding and overall health are top priority to the farmers. But those in the wild are on their own and may ingest what leaves a lot to be desired.

As such, there’s a high risk of parasites with wild salmon.

Now, wild salmon tastes better. But, it’s not worth eating raw because of the aforementioned reason.

Costco also has tuna for sale. But again, avoid any not labeled for sushi or sashimi. Luckily, Costco offers Wagyu sashimi-grade Hamachi, which is yellowtail tuna, sometimes called ahi tuna.

This is perfect for sushi. To learn more about that, check out this recent article. I cover all there is to know about that, including whether every location carries it.

Here’s the before, spent some time curing this salmon. Boutta slap my first fish onto the smoker 🔥 pic.twitter.com/ERH16mfHZL

Do you have to cure salmon for sushi?

It is not necessary to cure salmon for sushi, provided the salmon purchased was sushi-grade or sashimi-grade. But for a richer and different taste, curing it is appropriate for sushi. But it will not make regular salmon safe for raw consumption.

Some chefs let it marinate in kosher salt for about 20 minutes, after which it’s rinsed with water and vinegar.

The vinegar adds a layer of acidity to the outer flesh of the fish.

Curing is optional and still keeps the fish raw. The most important thing is to buy sushi-grade salmon. That way, you’re sure it’s safe to be consumed raw because it has undergone the recommended freezing guidelines.

Curing regular salmon does not make it safe to be consumed. Curing’s main purpose is to prevent spoilage (it alters the taste and texture too).

In this article, we explored what kind of fish is sushi-grade. We found out if frozen fish can be used for sushi.

But, we also checked out if there’s a difference between sushi-grade salmon and regular salmon. Then, we considered whether you could use Costco fish for sushi.

Lastly, we wrapped things up by finding out if you have to cure salmon before using it for sushi.