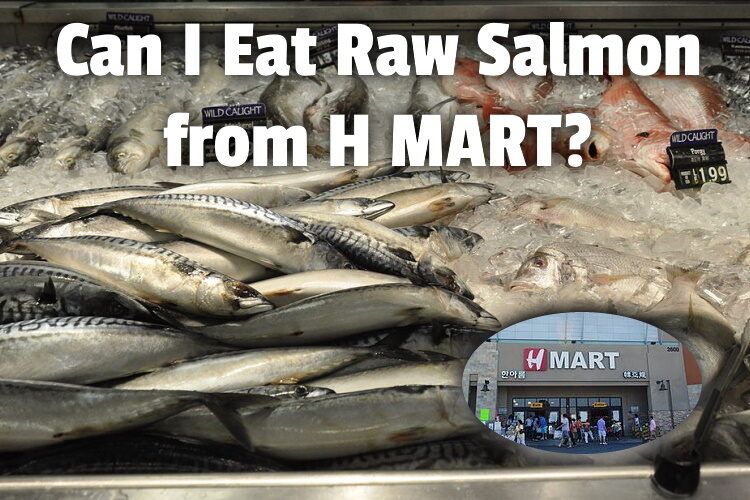 Asian grocery stores like H MART often have a vast array of amazing ingredients, including a vast array of live, fresh, and frozen seafood. But you may have wondered, “can I eat raw salmon from H Mart?”

As a general rule, any salmon sold at H MART labeled sushi-grade or sashimi-grade is safe to be consumed raw. So, ideally, specify and confirm if the fish isn’t clearly labeled, before deciding to consume raw.

There’s a lot more to know.

So, in this article, we’ll find out how to tell if fish is sushi-grade and whether it’s okay to use live fish for sushi. We’ll also find out if you should freeze salmon before using it for sushi and other fun facts about sushi.

As a general rule, H MART does often do sell sushi-grade salmon. However, H MART’s fish selection varies from location to location and from state to state.

Of course, you have the option of buying the fish whole.

Or you may prefer that it is gutted, cut into small pieces, filleted, and cleaned. The availability of sushi-grade salmon would naturally be affected by where you live. Some stores in some locations may have, while others may not.

H Mart is an awesome Asian market. I used to buy stuff there when I lived in Atlanta. In Duluth, to be precise. And my online research shows that a lot of folks agree with me.

Now, can you make sushi with grocery-bought fish in general?

This is what I explored in a recent article I published. I looked at what makes fish sushi-grade and if sushi can be made with any fish. Then, I showed whether you could use store-bought salmon for sushi. But I also revealed the most common fish used in sushi.

Chirashi. I got fresh sushi-grade salmon and yellowtail from the local Japanese deli ☺️ pic.twitter.com/IrhbAyCm0w

How can you tell if a fish is sushi grade?

To tell if fish is “sushi-grade”, look for the label “sushi-grade”, “sashimi-grade”, or “for raw consumption”. Essentially, these labels confirm that the fish is safe to be eaten raw.

Color, texture, and smell are the key ways to determine the health of fish.

Now, tuna is often chemically treated to maintain its color. It should be bright and shiny with a firm, silky, smooth texture, and it shouldn’t smell fishy.

As you probably know, the term “sushi-grade” is not backed by governmental oversight and regulation and is consequently not legally binding. It’s indicative of fish that has been flash-frozen soon after it was caught.

So, it is a marketing term that some unscrupulous fishmongers may employ to sell regular fish!

I’d suggest that you stick to high-end grocery stores when it comes to sushi-grade fish. Let’s be honest, who has the time to be scrutinizing fish to confirm if they meet the grade?

If you prefer farmed fish, you can rest assured that fish farmed in the U.S., Britain, Norway, and Canada are safe to eat because of the high standards that have to be met by fish farmers.

“Ikizukuri” is the art of preparing sashimi from live seafood. While this is a traditional style of cuisine in Japan, it is considered to be controversial and is even outlawed in some western countries.

Would you try live seafood prepared this way? pic.twitter.com/N8d7uGXO0n

Is it okay to use a live fish for sushi?

It is okay if the live fish is consequently killed sensitively, gutted, cleaned, and flash-frozen as prescribed by FDA guidelines to curtail the risk of parasite infection. But it is not okay if, by “live fish”, you mean employing Ikizukuri.

Ikizukuri is a method of presentation of sushi or sashimi in which live fish is served to be eaten even before the fish has finally lost consciousness! In effect, the fish is filleted while it is still alive.

A practice that is understandably hard to grasp by Western minds.

In fact, it is banned in Germany and Australia because it is rightly perceived as grossly insensitive and cruel and because the risk of parasitic infection is high. Live fish is arguably the freshest, but is it safe to be eaten raw?

That’s the question one must ask.

So, although you love fresh (live) fish, even if it would be used for sushi, you need to take steps to ensure that it is handled and prepared in a manner that makes it pathogen-free or at least renders the pathogens ineffective.

Considering the aforementioned, is it okay to eat raw salmon from the grocery store?

This is what I got into in a recent article I published. In it, I looked at whether it’s okay to eat raw fish from a grocery store and what happens if you eat raw salmon. I even shared what’s different about sushi-grade salmon.

Should I freeze salmon before using it for sushi?

As a general rule, salmon or any fish being used for sushi should be frozen prior to thawing and eating. But if it was frozen and thawed at the store, it is not necessary to re-freeze and then re-thaw before consuming.

However, if you won’t be preparing your sushi or sashimi on the same day you purchase the fish, freezing it will ensure it is fresher and help prevent against any food-borne illness.

This is what pro sushi chefs do.

Now, because most home freezers do not get cold enough to freeze salmon as required by the “parasite destruction” guidelines, it’s best to buy “sushi-grade” salmon from high-end fishmongers rather than opting to do the requisite freezing yourself.

That said, if you have to freeze the salmon yourself, the FDA recommends freezing it at or below -4 degrees Fahrenheit or -20 degrees centigrade for at least seven days.

You also want to be highly careful with the utensils and other stuff you’ll use, such as the container and wraps. Ideally, you’ll want to store it in a manner that makes it unlikely for cross-contamination to occur when you freeze it.

If you opt for the latter, note that the salmon’s texture may be less firm, as home freezers take a long time to freeze it, and the ice crystals that form may harm the flesh.

This is different from what occurs if it were commercially flash-frozen. A process that would have taken hours, not days, and that happens so fast that ice crystals are not formed.

After a trip to H mart.#Japanese #food #dinner #fish pic.twitter.com/yVurQZRqTC

How is the H MART fish quality?

H MART’s fish quality is overall very good and fresh. And most people who buy from the store are content with the quality. Some complained that there is often a smell in the fish section, but this has more to do with the cleanliness of the fish case than the quality of the fish.

But a few people mentioned having to return fish or not being given satisfactory information by H MART’s staff when they enquired about the sourcing and storing of some of the fish.

This is probably not peculiar to H Mart, but you may simply have to be a bit more careful when you shop there and know what to look for when buying top-quality fish.

In a recent article, I got into the difference between sushi-grade fish and regular fish. In it, I explained what kind of fish is sushi-grade and if you can use frozen fish for sushi.

But I also revealed if there’s a difference between sushi-grade salmon and regular salmon.

In the article, we found out how to tell if fish is sushi-grade and whether it’s okay to use live fish for sushi. We also found out if you should freeze salmon before using it for sushi.

And we found out about the quality of H MART’s fish and if it offers sushi-grade salmon.

File:H-mart – fish department – Mackerel – 2.JPG by Jarek Tuszyński and File:20140809-0072 Diamond Jamboree.JPG by Nandaro are licensed under the Creative Commons Attribution-Share Alike 4.0 International license and were merged, cropped, edited, and had a text overlay added.