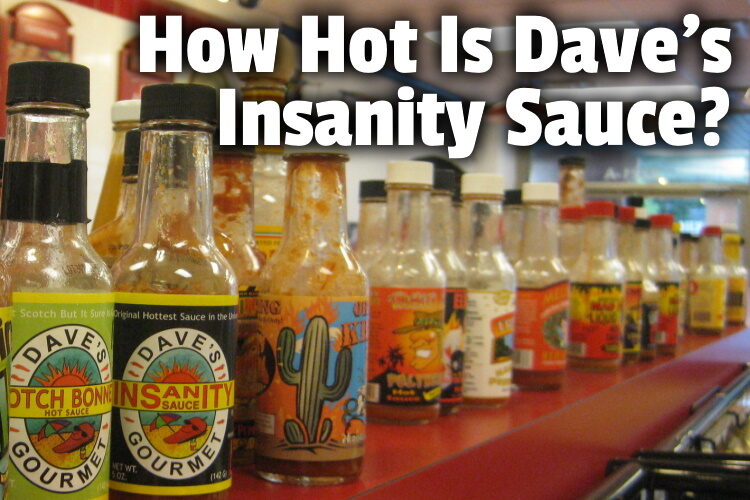 You know how a drop of hot sauce brings out the flavor in some meals. And if you enjoy that kick that comes from that peppery aftertaste, you’ve probably wondered, how hot is Dave’s Insanity sauce?

Dave’s Gourmet Insanity Hot Sauce is extremely hot, with a Scoville rating of 180,000. In fact, it’s the only sauce to be banned at the National Fiery Foods Show. The Scoville rating is a measure of capsaicin, the agent responsible for the hotness of peppers.

To put this in perspective, consider that Frank’s hot sauce has Scoville units of just 450. So, at Scoville heat units of 180,000, Dave’s is really hot.

If you’re into the hottest hot sauces, you’ll enjoy this piece because we’ll explore what pepper is in Dave’s Insanity sauce and compare Dave’s Insanity Sauce vs. Da Bomb.

Have not had this in years. Ready for some Dave’s Insanity Sauce! pic.twitter.com/tQTD9sSBls

What pepper is in Dave’s Insanity sauce?

Dave’s Insanity sauce is great for enhancing the flavor profile of your food.

It is a great cooking ingredient and is the original hottest sauce. The habanero and the red chiles in it are the main culprits, if you will. Now, let’s find out a bit about both hot peppers.

Habaneros are very hot, but there are hotter peppers. Some species can be 12 to 100 times hotter than a Jalapeno, and it has a Scoville rating of 100,000 to 350,000. Some varieties even have higher ratings. So, don’t say you’ve not been warned.

Habaneros originated in the Brazilian rainforest about 8,500 years ago.

The Mayans, in their travels, took it to several places. It’s grown so much in Mexico that it’s become a part of the culture. Interestingly, the name comes from Havana (Habana).

Mexico is the largest producer in the world, from which it’s imported into the states.

Red chili pepper, another ingredient, is known for its hot flavor and is often used as a spice. They have a Scoville rating of between 100,000 to 350,000. Jalapeno and Cayenne are popular varieties of red chili.

They provide some carbs, fiber, vitamins, minerals, and protein. But because we take them in small amounts, their contribution is naturally small. Not everyone can tolerate them. In fact, they have an adverse effect on some people.

Just another reminder for every follower I get during my debut I eat some Da Bomb hot sauce straight out of the bottle. Hope to see you there on the 9th. #EnVtuber #VtuberDebut #VTuberUprising pic.twitter.com/VwC33gkveB

Dave’s Insanity Sauce vs. Da Bomb: Which is hotter?

Dave’s Insanity is the only sauce that has been banned from the Fiery Foods Show for being too hot.

Talk about an insane heat level. To know what makes both sauces hot and Insanity hotter, let’s check out what they’re made of.

Dave’s Insanity has the following ingredients:

It’s got a good blend of tomato freshness, but its effect is mild.

Capsaicin, the hot pepper extract, is what makes it hotter than Da Bomb, which is essentially habanero based. Capsaicin is what gives it that “lethal” touch of pungency.

The following are Da Bomb Beyond Insanity’s ingredients:

Natural pepper extract is used to crank up its Scoville rating. So, if you like hot heat sauces, you know what to go for.

Dave’s Hot Sauce is one of the first sauces that comes to mind when one thinks of delicious cooking, and yet, it also removes driveway grease stains.

Good thing your name isn’t Rodney or you will be getting this for Christmas… Dave’s now has a Carolina Reaper version!!! Oh dear that will trigger some issues

Dave’s Insanity Sauce Caroline Reaper is insanely hot. It has a Scoville rating of 2.2 million! Little wonder, it’s one of the hottest sauces in the world.

To have an inkling of how hot Dave’s Insanity Sauce Caroline Reaper is, it helps to know that Carolina Reaper (CR) was once written up in the Guinness Book of Records as the hottest pepper in the world.

In point of fact, it’s probably the second hottest pepper in the world, with a Scoville rating of 2.2 million. But Dragon’s Breath Pepper is hotter, with a SHU of 2.4 million!

The sauce is so hot that the burn lasts (which is not surprising when considering the Scoville rating). Caroline Reaper is a crossbreed, a mix of two peppers, a Bhut Jolokia (the ghost pepper), and a red habanero.

If you have regulatory or heart conditions, you want to stay off because the sauce is insanely hot!

If you think habanero is hot, consider that ghost pepper is about 5 times hotter. And that Caroline Reaper is 2 times hotter than ghost pepper. Ghost pepper’s Scoville rating is 1 million (while CR is 2.2 million).

What about Louisiana hot sauce? How hot is it?

The 12 Dave’s of Christmas are here! No matter how you use it, Dave’s hot sauce is sure to make your season brighter. Which will you be trying?

🎶On the first Day of Christmas Dave’s Gourmet gave to me Ultimate Insanity.🎶 pic.twitter.com/KrPpbyqYEe

Dave’s Gourmet Ultimate Insanity Hot Sauce is the hottest of all Dave’s hot sauces. Red Savina Habaneros are the secret of its incredible heat, and it’s no accident that it bears the word “ultimate” in its name.

It’s not for the faint of heart.

On the product’s Amazon page, the manufacturer offered a chart to help one choose their sauces. “Ultimate” was categorized as “insanely hot.” It’s understandable, seeing as it has Scoville ratings of 250,000.

The following are Dave’s sauces, from the mild to the insanely hot:

What is the hottest hot sauce in the world?

The Scoville scale measures the heat in chili peppers and other spicy foods. Considering how hot Regret is, the common green chili pepper has a rating of between 350 to 1,500 Scoville units.

Habanero and ghost pepper, the peppers that give Regret its searing heat, have Scoville units of 150,000 to 575,000 and a little over 1,000,000, respectively! It also has a touch of garlic, which may have contributed, even if in a small way, to its pungency.

At the risk of stating the obvious, the hot sauce is not for the faint of heart. In fact, I read about a pizzeria that requires folks to sign a disclaimer if they want to try it with their pizza.

Even if you’re a chili-head, now and then, you may want to try tomato sauce or pasta sauces when you’re not in the mood for the hottest habanero-pepper sauces of the day.

We also found out how hot Dave’s Insanity sauce Carolina Reaper is and which of Dave’s products is the hottest. Lastly, we wrapped things up by considering the hottest hot sauce in the world.

Lots of hot sauces at Firehouse Subs by sylvar is licensed under CC2.0 and was cropped, edited, and had a text overlay added.

link to How Hot is Louisiana Hot Sauce? Scoville vs. Flavor Breakdown

At first glance, hoisin sauce and oyster sauce seem similar. They are dark, thick sauces that are both savory and tangy. But you may not have both when you need them. So, let’s compare and look at...