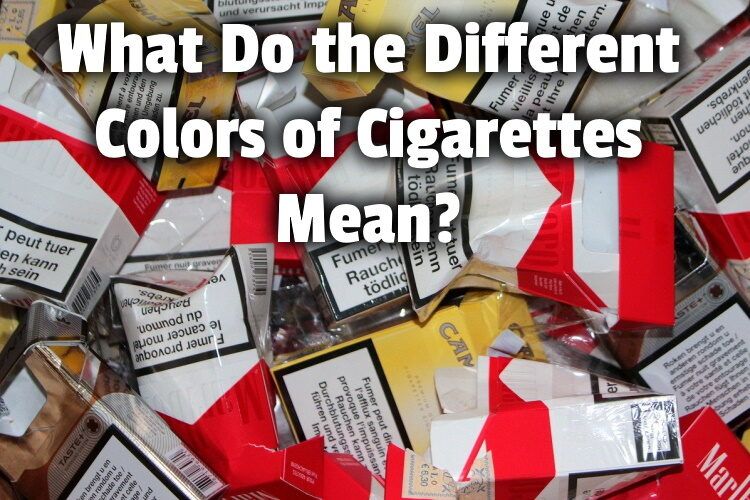 The different colors of cigarette packages are meant to delineate the differences in a company’s product lines such as lite, menthol, mellow, full-bodied, etc.

Like most manufacturers, they have several products with slightly varying consistencies. But some smokers disagree: They believe these colors are merely a clever replacement for some banned descriptors.

But, there’s a lot more to know.

In this article, we’ll find out why cigarettes are colored the way they are and what are the different cigarette colors. Then, we will find out the color of the strongest cigarette and that of the lightest. But we will also find out if these colors are mandated by law.

Currently reading the guide to all the different colors of American spirits pic.twitter.com/ZptRlts19p

Why are cigarettes colored the way they are?

Cigarettes are colored the way they are to signal some qualitative difference to buyers. Cigarette manufacturers adopted its effective color-coding after they were banned from using word descriptors such as ‘light,’ ‘mild,’ and ‘low’ on cigarette packages.

Before colored packaging was employed, some cigarettes were advertised as “light”, “mild”, or “low” to distinguish them from “regular” cigarettes. These terms were meant to indicate that these products contain lower levels of tar, nicotine, and chemical additives.

But the FDA banned the use of these terms because it believes that they subtly mislead the public into thinking that cigarettes labeled or advertised in this manner cause fewer health issues. They are convinced that they still pose serious health risks.

Cigarette manufacturers did comply with the letter of the ban. They stopped using these descriptors in their labels and advertising. Whether they complied with its spirit is debatable.

Now, let’s check out something interesting about one of the most popular brands. A lot of cigarettes burn fast.

But American Spirits does not. Do you know why?

Check out a recent article I published. I explained whether tobacco additives make them burn faster and what makes American Spirits different. I get into whether they contain additives and what additives are in them. And I revealed whether slow-burning cigarettes are bad for you.

What are the different cigarette colors?

The colors employed vary slightly depending on the manufacturer. Silver, gold, and blue are used to indicate milder products. Green is used to show menthol cigarettes, while red is used for traditional cigarettes.

Malboro employs three primary colors: Red, Gold, and Black. Red “Flavor” represents its classic offering. It exemplifies its brand promise: “come to where the flavor is.” Gold stands for Malboro Lights, while Silver is the color for Ultra-Light.

American Spirits employ 8 different colors, indicating slightly varying compositions of Nicotine, Tar, and CO, as shown in the below list:

I looked at examples of cigarette brands that are vegan and which cigarette companies do not test on animals. And I revealed whether American Spirits’ filter contains pig’s blood!

What color is the lightest cigarette?

Orange is the color of the lightest cigarette. Blue, gold, and light green are typically used for light cigarettes, while white, silver, and orange are used for ultralights. But this too may vary slightly from brand to brand.

American Spirits, for example, use an orange pack for its lightest cig, while Malboro employs silver and orange. Light and ultra-light cigarettes contain less tar and nicotine than regular cigarettes. Naturally, ultra-light is the lightest.

What about herbal cigarettes? Are they also light and better? And, what’s in them?

What color is the strongest cigarette?

Red or black is often used to denote the strongest cigarette. But it varies from brand to brand.

These are cigarettes that have higher nicotine and tar yields and are on the opposite end of the spectrum relative to the ones we looked at in the section above.

I explained why Instacart does not deliver tobacco products and even revealed if it’s legal to deliver cigarettes.

Are cigarette colors mandated by law?

Cigarette colors are not mandated by law. They were voluntarily adopted by cigarette manufacturers after they were banned from using certain descriptors.

Cigarette manufacturers claim that they are merely using these colors to communicate different brand packs, but others disagree.

They believe that these colors are being used by cigarette manufacturers to communicate brand imagery, no doubt. But in addition to this, they are also employed to lessen health concerns and as a replacement for descriptors such as “light”, “low”, and “mild”.

We are all familiar with colors being used as codes.

This is one of the key functions of cigarette colors. Just as “green” or “red” means different things to us, colors on cigarette packages are also meant to evoke different responses.

Cigarette manufacturers no longer use those banned descriptors. They have smartly leveraged color-coding to achieve the same purpose.

Now, can you order cigarettes through DoorDash?

In the article, we found out why cigarettes are colored the way they are and what are the different cigarette colors. They are colored to differentiate the product lines and to perpetuate the impression that some products come with less health risk.

Then, we found out the color of the strongest cigarette and that of the lightest.

Red or black is often used for the strongest, while orange or white is used to denote the lightest. Lastly, we wrapped things up by considering if these colors are mandated by law.

No, the colors are not required by law. They were voluntarily adopted by the cigarette manufacturers.

Image by Myriams-Fotos from Pixabay

link to Why American Spirits Are Better

You know that American Spirit products are cool and all, but are they really organic or additive-free? And how does that really impact you? Let's look at why American Spirits are better. American...