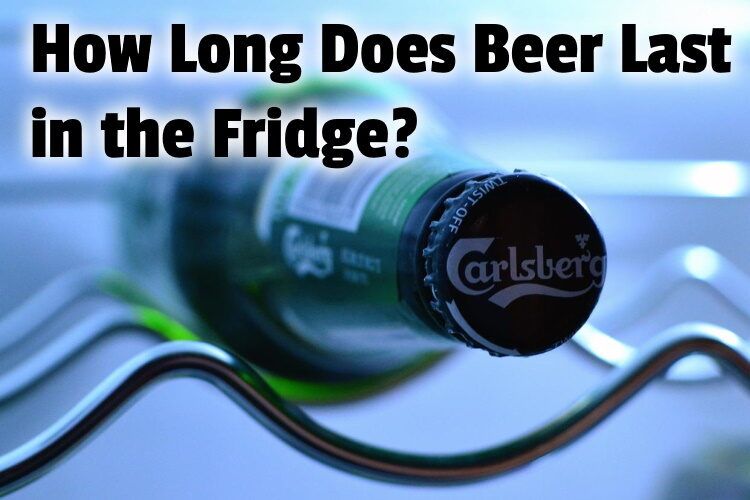 Beer is not like wine which gets better with age. Beer is always better when fresh. But we aren’t always sure of its shelf life, and how to tell if it has gone bad. So, how long does beer last in the fridge?

As a general rule, beer can last up to two or three years past its best-by date if it’s unopened and refrigerated. But over time, the taste and aroma of beer will dimmish. However, it is still safe to be consumed without any health risks. Once opened, however, it should be consumed within a day.

At room temperature, beer lasts about 5 to 9 months beyond the expiration date printed on the label. What makes a big difference and ensures the best quality is how and where the beer is stored.

Did you know that beer bottles matter?

Well, darker bottles, such as brown bottles and green bottles, are better for storing beer than clear bottles. Why? You’ll find out the reason and other important things about beer in the article.

Does unopened beer go bad in the fridge?

Ideally, you want to drink it while it’s at peak quality, while it’s fresh. This is within 3 to 6 months after you bought it.

Of course, it has an expiry date. After this period, its color and flavor will likely change, and it may not taste as good as it ought to, but you can still drink it without any worries, as long as it has been properly stored and undamaged. This is the key to longer shelf life.

The truth is that the expiration date, printed date, or expiry date are not intended to show whether the beer is safe to drink.

It relates to the quality of the beer. The date is simply the manufacturer’s estimate of how long unopened beer will remain at peak quality.

The oxidation process is a natural aging process that eventually alters the flavor and aroma of beer. As oxygen interacts with the different chemical compounds in the beer, it breaks them down, resulting in different flavors.

Oxidation is triggered by air leakage.

Beer in a glass bottle is more susceptible, while canned beer is not so susceptible because of its airtight seal. And what’s the best place to prolong beer’s shelf life? Ideally, store beer upright in a cool place or dark place with a constant temperature, such as a fridge.

It’s easy to understand that it’s better to store them in a cool place, but why keep them in a dark place?

It’s because beer, like a lot of things, is impacted by UV light (ultraviolet light) or UV rays. Beer is an alcoholic beverage that is very sensitive to light. Natural light and warm temperatures are not your beer’s friends.

It’s made from plant materials that undergo a chemical reaction in the brewing process. For example, live yeast is added to the sweet hoppy mixture. It breaks down sugar, releasing carbon dioxide and alcohol.

Hop compounds are photosensitive and become “light struck” when exposed to light. This is what triggers the skunky taste and flavor. So, you don’t want to expose your beer to direct sunlight. Keep beer cold and in a dark area. Yes, think low temperatures.

Sealed beer is shelf-stable for 6 to 8 months after its use-by date, especially if it is refrigerated. And generally, the shelf of beer is prolonged if it has an alcohol by volume (ABV) greater than 8%. It’s also good to know that unpasteurized beer has a shorter shelf life because pasteurization kills off harmful pathogens in beer.

So, which beer has the highest ABV?

This is what I got into in a recent article I published. In it, as its title indicates, I share 25 Beers and their ABVs and which American beer has the most alcohol. But I also shared what is the cheapest beer with the most alcohol.

So Walker tweeted a picture allegedly from last night with a beer that expired nine months ago? pic.twitter.com/rMlwURPKuE

Can expired beer make you sick?

No. Expired beer cannot make consumers sick. Once beer is past its best-buy date, its flavor and quality are negatively impacted, but that will not cause bacteria to grow. Additionally, carbonation may diminish and you may notice sediment at the bottom of the bottle.

Truth be told, saying that beer expired is a tad misleading. What happens is that the taste becomes flat and unappealing.

Unless skunked beer or flat beer is your thing, why would you want to risk having an upset stomach or experiencing that flat, bland taste?

This decrease in the quality of the taste comes down to 3 factors: hops, light, and oxygen. Unlike wine, beer, in general, does not become better with age.

So, after the recommended “best-by-date”, it’s best to throw out beer if there’s no carbonation or white foam after you’ve opened it, as it may upset your stomach. But it’s not true that expired beer makes you sick.

There’s also no risk of food poisoning or any major health risks.

This specifically is a Geuze meaning it’s a blend of 1, 2, and 3 year old beer in the traditional sense. Some can be blends of even 4 or 5 year old barrels.

Can you drink 3-year-old beer?

Yes. You can drink 3-year-old beer. The beer will have expired, but it is not that it becomes unsafe to drink. Expired beer does not become toxic. It is perfectly safe to consume but won’t taste as good.

Beer is a perishable product. Its flavor degrades over time as it is exposed to air, light, and heat.

So, the print date or use-by date is a signifier of the best time to consume the beer. It does not mean that there would be any serious health implications if you drink beer past the date.

That said, why you’d want to drink beer past its expiration date beats me. How about fresh beer instead?

Have you ever wondered about buying beer at Trader Joe’s?

That’s what I got into in a recent article I published. In it, I shared info on whether Trader Joe’s makes their own beer and how much the beer is. I also get into whether they sell Guinness and if they have cheap beer.

Happy International Beer Day, folks! C’mon by for a cold one from our Texas Beer Fridge! pic.twitter.com/01HAF9w3tY

How long can beer be in a fridge opened?

It is best to consume beer within a day after it was opened. After 24 hours, it will become flat and the flavor will diminish significantly due to oxidation. At that point, it could be cooked with in foods like chili, but would not taste good if consumed.

If it has developed an off-odor, flavor, or appearance when you’re ready to drink it, it’s a good idea to simply discard it, even though you’re not going to be sick.

By the way, what we’ve been exploring so far applies to store beer. What about homemade beer? It keeps well for about a year, and its flavor evolves, but you’ll want to consume it within 12 months.

As you know, there are different types of beer, and each has different flavors and ideal shelf life. Lighter beers and pale ales are best consumed within 120 days of packaging.

Darker, heavier, hoppy beers such as imperial stouts and porters should be consumed within 180 days.

What about your favorite craft beer? As you know, they have higher alcohol content. You can expect it to last 6 months to two years in the refrigerator and 6 to 9 months in the pantry.

And vintage beers? These are a type of beer that has been aged for a year or more and has shown positive during this time period.

All this talk about beer is probably getting your taste buds excited, and what you’d like now is simply any good beer. Preferably cold beer. A six-pack of beer or even a case of beer would be more like it.

And you’re wondering if you could order beer through DoorDash.

You’re in luck because that’s what I got into in a recent article I published. In it, I explained how you order alcohol from DoorDash and whether it’s cheaper to use than Instacart to order alcohol.

I also got into whether your ID would be scanned before it would be handed over, and I revealed whether they deliver everywhere.

What to do with expired beer

There are many uses for expired beer or bad beer. They include:

Let’s check out what some of these uses entail.

It’s not as effective as a fire-extinguisher, but there are cases where a can of beer or a bottle of beer is the closest thing to you. And, because it’s largely water, it could be what would save the day.

Beer makes for a great meat tenderizer because it is slightly acidic, especially for leaner cuts that could otherwise be too tough.

Marinating with beer drops the carcinogenic levels in grilled meat, and it enhances the antioxidant and phenolic content of meat.

Apply expired beer to the surface and use a soft cloth over the furniture and be prepared to be dazzled.

Adding stale beer to your haircare regime can deliver a powerful dose of proteins and B vitamins, leaving the hair fuller, thicker, and shiny.

Boil a cup or two of the expired beer. When its alcohol content has been off, allow it to cool down. Add it to your shampoo and use it as you’ll normally use your shampoo.

In the article, we looked at whether unopened beer goes bad in the fridge and if expired beer can make one sick.

We also looked at whether one can drink 3-year-old beer and how long beer can last in a fridge opened. Lastly, we wrapped things up by considering what expired beer can be used for.

Image by tookapic from Pixabay

link to Can You Buy Beer at Trader Joe's?

Trader Joe's sells a lot of good stuff at low prices. But a lot of it is their house brand. So, can you buy beer at Trader Joe's? Here's what I know: Trader Joe does sell beer in states where...

Continue Reading
link to Can Instacart Deliver Alcohol? (Yes, but not in every state)

Nothing quite beats the convenience of having a delivery service like Instacart bring you your groceries right to your doorstep. But what about alcohol? Can Instacart deliver alcohol? I decided to...