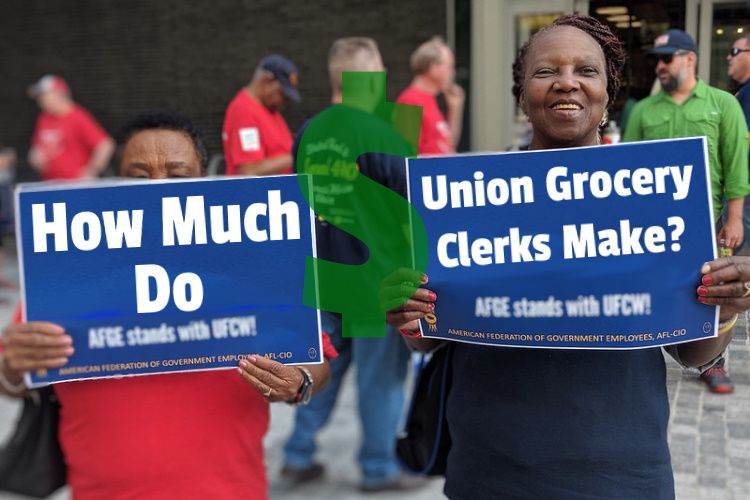 In theory, labor unions exist not only to keep workers safe and ensure their rights, but also to maximize how much they get paid, but how much do union grocery clerks make?

Here’s what I know from years of working with former union employees:

The average salary for a grocery clerk is $11.89. Annually, a union grocery clerk could make $13,500 to $35,500 depending on the collective bargaining agreement terms of the employer, and the number of years of experience.

Of course, I’ve never worked for a union grocery store as Whole Foods Market is not unionized.

I was, however, a member of the musician’s union when I was younger, and as a leader with Whole Foods Market for over 2 decades, I’ve literally hired hundreds of former union workers and heard their stories.

So I admit to being a little biased away from unions. But let’s dive in.

BREAKING: 250,000 @Safeway grocery workers across the country just got a raise! @UFCW is proud to stand up for all the brave grocery workers on front lines of #coronavirus helping families stay safe. #1u

What is the UFCW minimum wage?

The United Food and Commercial Workers union has pushed for a minimum wage of $10.10 and is also a proponent of President Biden’s proposed new minimum wage of $15.00. However, at the individual grocery stores represented by the UFCW, each store sets its own wages as outlined in its collective bargaining agreement

The UFCW is the main union for grocery clerks.

It’s made up of 1.3 million members in the U.S. and Canada. In addition to other activities, it seeks to raise the standard of living of its members, eliminate the gender wage gap, and combat discrimination.

The current federal minimum wage is $7.25, although that is likely to change soon.

Proponents of a higher minimum wage are pushing for a base of $15.00 per hour, while those who are not in support argue that some businesses can’t afford an average that high.

What’s super apparent from the foregoing is that what you can earn varies from place to place.

So, a little bit of research (such as reading this article and the others whose links I’ve included) goes a long way toward helping you find a good grocery store to work for.

Aldi could be one of the stores to research, and I’ve done the work for you (there are a couple of articles about it here on my site). A recent article answers the question of whether its employees get a discount. And if not, what kind of pay they get being a non-union store.

Our #770Delegation teams at Ralphs, Vons, Albertsons & other @UFCW grocery stores across SoCal have stepped up so our values are heard by store managers & corporations. Their work is a reminder of who we’re fighting for & why we’ll win.

What is the average salary for a grocery clerk?

It’s worth pointing out that when I ran the Whole Foods in San Francisco nearly 20 years ago, we were paying a minimum of $10/hour even then, and to above entry-level positions, it was quite a bit more than that. By comparison, most of the union stores around us were paying far less.

So just because a store is union doesn’t mean the pay will be better.

One of the vital things we can learn from the difference between the lowest salary ($13,500) and the highest ($35,500), is that it shows that there are opportunities for growth in the industry.

It’s an industry where dedicated workers can access opportunities for advancement, either by giving their best at their current jobs or by moving to other grocery stores in the same location or in a different part of the country.

And, speaking of a different part of the country, which cities are you likely to get paid a lot more money?

Of course, it’s smart to look at the potential increase in salary in relation to living expenses, before you make the move. After all, some cities are more expensive to live in.

The following are places where the average salary is more than the national average.

Proud to be part of UFCW’s campaign to mobilize customer support for grocery workers!

These brave workers are our mothers & fathers, brothers & sisters, neighbors working tirelessly for us and or families.

Shoppers agree, one job should be enough. #LaborDay #StandingForWorkers pic.twitter.com/zwn6Z6sBXR

And, this makes sense, right? In fact, the current minimum proposed by the union is almost twice the federal minimum.

The unions were actually the first to come up with the idea in 1886 to establish the American Federation of Labor.

The union promoted the idea that American workers deserve a “living wage,” which would enable them to raise and support a family and participate in public life. They wanted a higher standard of living for American workers than what’s obtainable in Europe.

During the depression, union workers and unemployed people worked together to support the passage of the Fair Labor Standards Act. It set the first federal minimum wage at $0.25 per hour.

After World War II, as the country enjoyed economic prosperity, the union sought a raise to $1.60 per hour, which is about $11.20 in today’s terms. They’re currently pushing for $15 per hour. The reality is that some grocery stores have been paying more than the minimum rate for years.

The biggest differences though are the fact that we have a significant amount of government regulation and oversight now that didn’t exist when unions were created.

Think about it. These days we have:

And while unions served an extremely valuable purpose in those days, at least in the grocery industry, in most cases, they’ve outlived their usefulness. At least in my opinion.

#RTW is WRONG. #NM #UFCW Grocery workers raise their families and build OUR state up thanks to a strong union #nmleg pic.twitter.com/IGR1nQ3zBO

In general, non-union grocery stores pay more in wages and benefits than union stores do. Of course, there are exceptions, but as demand for workers increases, stores naturally begin to pay more as the natural outcome of competition and supply & demand.

So a lot of grocery stores pay very well without being nudged by UFCW.

After all, they’re owned by seasoned business people who don’t need any lectures about the link between employee motivation and the store’s reward structure.

On paper, unions are advocates of employee welfare.

But, the reality is a tad more complicated than that. It’s highly instructive to note that some of the most successful and beloved (by customers and employees) stores, which also pay high salaries and offer great benefits, are non-union.

The minimum wage being touted by UFCW is not what determines what top grocery stores pay. In fact, a few of the top non-union grocery stores already pay $15 per hour, and they also have great benefits.

Having worked in the grocery industry for a long time, I can attest that the sky’s the limit if you’re a dedicated staff, and you don’t need to be a member of a union to earn top dollar.

It’s helpful to understand some of the positions available in a grocery store.

That’s why I provided lots of info about that in a recent article of mine. After all, certain positions, even if they are entry-level, can pay better than others. Just click the link to read it on my site.

BREAKING: 70,000+ @StopandShop grocery workers just got a 10% raise and 2 weeks #PaidLeave as they continue helping families amid #coronavirus outbreak.@UFCW is fighting for all the brave grocery workers on front lines. They all deserve a raise. https://t.co/UAi0I7WF9Q #1u pic.twitter.com/PVnsOcfHJJ

Which grocery store pays the most?

Costco, Target, and Whole Foods Market pay $15 per hour which is more than the national average of  $11.89 per hour and significantly more than the Federal minimum wage which is currently $7.25 per hour.

To decide which one pays the most, we’ll need to consider other vital factors, such as the benefits the company provides.

After all, it’s not just base wage. We also have:

At the end of the day, what’s essential is not just the base salary but the “net effect” on your well being.

To drive home this point, progressivegrocer.com reported a story of an employee who went through college debt-free because the grocery store she worked for has a tuition reimbursement program.

So, depending on where you are in life, it’s smart to pay careful attention to the benefits.

In a recent article of mine, I provided an in-depth guide that explores the base salary and benefits of the top grocery stores.

I looked at the highest paying grocery store, the pay, hours, benefits, the best grocery store to work for, and other vital facts.

In the preceding paragraphs, we explored the UFCW minimum wage.

But we also looked at the average salary for a grocery store clerk, whether union workers make more (they don’t), and the grocery store that pays the most.

UFCW Rally for a Fair Contract by AFGE is licensed under CC2.0 and w3as modified to superimpose the title of this article over the signs in the image.